How to Write a Research Paper Outline In 7 Steps 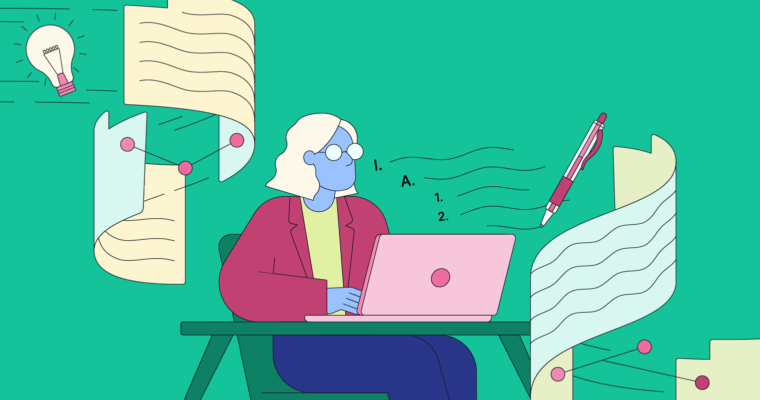 A research paper outline is a supporting document that lists all the topics to include in a paper in the intended order, usually divided by paragraphs. The typical outline of a research paper also consists of other details like subtopics and evidential sources to help the writer stay organized. Some even have individual sentence topics and early ideas for phrasing.

What is a research paper outline?

The outline is an integral part of how to write a research paper. The main purpose of a research paper outline is to structure the topics, data, and all other inclusions in the paper (like direct quotes) so you stay organized and don’t forget anything.

Conventionally, writers compose outlines after choosing a thesis statement and sourcing research evidence, but before writing the first draft. Making structural changes is far more efficient in the outlining phase than after you write the first draft; you can remove certain topics early on without wasting time writing them and add new topics before the drafting phase so you can write everything all at once.

The typical outline of a research paper is broken up into sections and paragraphs, listing each paragraph’s topic and the related evidence or data to include therein. The depth of detail can change depending on your writing style or the requirements of the paper, as we explain below.

Are there different kinds of research paper outlines?

Research paper outlines can be one level, two level, and so on, depending on their intricacy. One-level outlines display just the section headings or main topics, while four-level outlines get very detailed with paragraph and sentence breakdowns.

There are three popular formats for research paper outlines: alphanumeric, full sentence, and decimal. Below, we’ll explain the details of each and illustrate their differences with the research paper outline examples, focused on the same topic: “Michael Jordan vs. LeBron James: Who’s the Best Basketball Player?”

Alphanumeric is the most common outline format—with main topics listed as Roman numerals, subtopics as capital letters, specific points for each subtopic as Arabic numerals, and further details for individual points as lowercase letters.

You would write the information in quick blurbs—just a few words—instead of complete sentences.

b. Owner of Charlotte Hornets

b. First player to accumulate $1 billion as an active player

A. Of course, Michael Jordan is better

However, the significant difference is that you would write the information in incomplete sentences instead of quick blurbs. The advantage is that your outline is more specific and easier to share with colleagues when working as a team. The disadvantage is that it takes a little longer to write.

I. Michael Jordan is often considered the greatest basketball player of all time.

A. Jordan’s career in basketball is full of accomplishments and accolades.

a. Jordan was named NBA Finals MVP all six times he was eligible.

2. Jordan twice played for the US Olympics Basketball Team.

a. Jordan’s first Olympics was in 1984 when he won the gold medal.

3. Jordan was selected to play in the NBA All-Star Game fourteen times.

B. Jordan’s legacy encompasses achievements on and off the court.

1. Jordan still holds a couple of significant records in the NBA.

2. Jordan has notable success even when not playing basketball.

a. Jordan starred in the original 1996 film Space Jam.

A. James’s career mimics, and in some cases surpasses, that of Jordan’s career.

a. James was named NBA Finals MVP all four times he was eligible.

2. Like Jordan, James twice played for the US Olympics Basketball Team.

a. James won the 2008 gold medal as part of the US basketball team.

3. James was selected to play in the NBA All-Star Game eighteen times.

B. James has a rich life outside of basketball as well.

1. More than Jordan, James is known for his philanthropic work.

2. Aside from charity, James has a few other distinctions from his lifetime.

b. James is the first NBA player to accumulate $1 billion as a player.

III. Considering the highlights of both athletes’ careers, who is better?

A. Of course, Michael Jordan is better.

Each new piece of information uses the subsequent number (1.1.1, 1.1.2, etc.), so you always know where you are in the outline. You would write the content for each line in quick blurbs, just like the original alphanumeric formal.

Decimal research paper outlines are the most thorough but can get complicated. They’re recommended for writers who prefer technical precision or for lengthy outlines with many topics and subtopics.

b. Owner of Charlotte Hornets

b. First player to accumulate $1 billion as an active player

3.1 Of course, Michael Jordan is better

1  Choose your thesis and gather sources

Your outline is not the first step in writing a research paper. Before that, you first need to choose a thesis and then gather primary and secondary sources to back it up.

Your thesis is essentially what the research paper is about. Your thesis is given to you in some assignments, but sometimes, as with independent research, you’ll have to develop one on your own.

Once you’ve settled on a thesis, you’ll need evidence to support it. Collect all the relevant sources and data early on so that you know what to write about. Researching often reveals new aspects of your topic that you hadn’t known about before. It may dispel any misinterpretations you have—better to find out you’re wrong sooner rather than later. For help on how to cite your sources, use our free Citation Generator.

2  Make a list of all the topics, subtopics, and points you want to cover

Go through your research and note each topic, subtopic, and supporting point. Be sure to keep related information together. Remember that everything you discuss in your paper should relate to your thesis, so omit anything that seems tangential.

If you’ve highlighted any specific passages or quotes from your sources, feel free to include them too. They aren’t necessary for all research paper outlines, but they save you time when you’re in the middle of writing your first draft.

Choose the type of research paper outline that best matches your topic, the assignment’s length, and the complexity of your paper. Simple papers only require simple outlines, but more advanced topics with lots of research can benefit from more detailed outlines.

Consider whether you’re sharing your outline with other team members or whether you’re writing it solo. Likewise, consider the length and amount of topics. The decimal format can help organize long papers, but feel free to stick with alphanumeric if it makes you comfortable.

4  Consider the structure and sequence of your topics

Before actually writing the research paper outline, think long and hard about the order in which you present your topics. What is the most logical sequence? What structure would communicate most clearly to your readers, who may be unfamiliar with these topics?

Keep in mind that some topics only make sense if they come after other topics. Before presenting new findings or revelations, you may want to add background or contextual information first. All other factors being equal, a chronological sequence is often the most logical structure.

5  Create the framework for your outline

Rather than writing your research paper outline entirely at once, start with just the framework. Try putting the main topics in order without yet including any subtopics or supporting points.

Starting with the framework gives you a clear look at the backbone of your research paper. Now would be a good time to rearrange the order if there’s a problem or add a new topic if you find something is missing. It’s never too late to go back and conduct more research to flesh out the areas you feel are lacking.

After you’re satisfied with the framework, go ahead and add the details. Most research paper outlines benefit from including the paragraph structure, so feel free to add lines about your topic sentence, development/support sentences, and conclusion for each paragraph.

If you want to get meticulous, you can add a few notes about sentence structure. Be careful of getting too detailed, though—otherwise, you’re writing a first draft instead of an outline!

Finally, check your completed outline to see if there’s room for improvement. This is your last chance before you begin the first draft.

Double-check that all your topics are presented in the optimal order for your reader. Also, look over your research notes again to see if you’ve forgotten anything. Once your outline is the way you want it, it’s time to begin writing your research paper.

What is a research paper outline?

A research paper outline is a supporting document that defines the structure of a research paper. The author creates the outline before the first draft to stay on track when writing.

How is a research paper outline structured?

Research paper outlines are generally divided into sections, paragraphs, and individual sentences or points. The amount of detail in a research paper outline varies depending on the writer’s style, the assignment requirements, and the complexity of the topic.

What are the different formats of research paper outlines?