The Ultimate Guide to Phrases 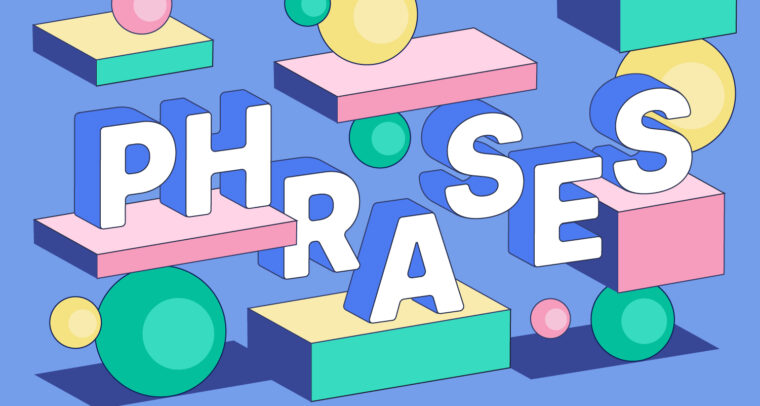 A phrase is a small group of words that communicates a concept but isn’t a full sentence. You use phrases in your writing and your speech every day. There are lots of different kinds of phrases, some of which play a technical role in your writing and others that play a more illustrative role. No matter which role a phrase is playing, it’s achieving one simple goal: making your sentences richer by giving your words context, detail, and clarity.

Keep in mind, not all phrases are good phrases. Sometimes, common phrases actually undermine your writing by making you look less confident or making your point less clear. Know which phrases to avoid so you don’t inadvertently weaken your writing by using them.

Even though you write and speak phrases every single day, truly understanding their mechanics can be tricky. Read on for a deep dive into the various types of phrases English speakers use and become a stronger writer, speaker, and editor by mastering the art of phrasing.

Phrases and clauses aren’t the same thing. A clause contains a subject and a predicate and in many—but not all—cases, can be a sentence on its own. In contrast, a phrase can’t be its own sentence because a phrase does not contain a subject and predicate.

Here’s a quick example of a phrase vs. a clause:

Clause: That cat meows so loudly

Clauses contain phrases, and sentences contain clauses. So an easy way to visualize the three are: phrases < clauses < sentences.

The term “phrase” is understood to mean two different things: a sentence component and a common expression. These two types of phrases are known respectively as grammatical phrases and common phrases.

A grammatical phrase is a collection of words working together as a unit. Grammatical phrases add meaning to sentences by giving detail about one or more of the parts of speech in use.

A grammatical phrase can clarify any part of speech—the key here is that all a phrase does is provide some detail; it doesn’t have the structure to be a clause of its own.

Sentences don’t need to have phrases to be grammatically correct. Sometimes, a sentence only has individual words working together, like:

It’s a short, simple sentence that paints a clear, yet stark, picture. By expanding some of those words into phrases, you get a much more detailed image of how Sheila spent her time yesterday. For example, you might write:

Grammatical phrases come in a variety of types and often, you’ll find two or more in the same sentence. Each type is named for the part of speech it modifies or the role it plays in a sentence:

An adverbial phrase is a phrase that takes on the role of an adverb in a sentence. Adverbs modify verbs, adjectives, and other adverbs. Adverbial phrases in action look like:

A noun phrase provides detail or clarification about a noun. Examples of noun phrases include:

Verb phrases are phrases that contain a verb and any linking verbs or modifiers. Like an adverbial phrase, a verb phrase plays the role of a verb in the sentence where it’s used. Examples of verb phrases include:

A gerund phrase is a phrase that includes a gerund, which is a noun created by adding ing to a verb, and its modifiers. Within a sentence, a gerund phrase acts as a noun. It can be tricky to understand, so remember the definition of a noun: a person, place, thing, or concept. Often, gerunds fall into the category of “thing.” Examples of gerund phrases include:

Participles are modified verbs that take on the role of adjectives. Participle phrases are phrases that contain participles and their modifiers, like:

An appositive phrase is a phrase that includes an appositive and the noun (or pronoun) it describes. Appositives are short descriptions that add detail about a noun by defining it.

Here are a few examples of appositive phrases:

Tips and tricks for grammatical phrases

Verbs playing adjectives’ roles? Verbs turned into nouns? When you break down grammatical phrases and examine how they operate within sentences, they can suddenly seem complex and confusing. Here are a few tips for getting phrases just right every time:

As we mentioned above, grammatical phrases are just one broad category of phrases. The other category, common phrases, are pieces of figurative language that rely on the listener’s familiarity with them to be understood. When the listener (or reader) isn’t familiar with a specific phrase, they might misunderstand or misconstrue the message. Keep this in mind when you’re writing. A big part of effectively writing with your readers in mind is accurately gauging whether they’re likely to understand the phrases you use.

Types of common phrases include:

Euphemisms are phrases that communicate specific ideas through “softer,” more polite language. Euphemisms are typically used to avoid speaking directly about subjects that evoke an unpleasant image or otherwise make the speaker or listener uncomfortable.

A saying is a pithy phrase that uses figurative language to describe something. A few common sayings are:

Sayings that convey a general truth or observation—usually through metaphor—are known as adages. Two common adages are:

A proverb is a type of saying that, like an adage, expresses a universal truth. However, the difference is that proverbs impart advice. They are the deeper sayings that convey wisdom, such as:

A figure of speech is another kind of phrase that expresses a point through symbolic language. Figures of speech are typically used for rhetorical and storytelling purposes and come in many forms, like:

A fixed expression, also known as a set phrase, is a phrase that’s been cemented into our consciousness in a specific order. The key here is that the phrase doesn’t have to be in this order to express its concept, but it’s become so familiar in this order that expressing it any other way would just sound weird.

A few examples of common fixed expressions include:

What do phrases mean?

So why do we repeat common sayings, even when they’re impossible to understand at face value?

Because they’re so ingrained in our language—and nearly every language has them—that they’re often the easier way to express an idea than expressing it through literal language.

In other words, they’re a linguistic shorthand. Think about it—if your new colleague tells you to make sure you bring a sweatshirt to work because the office is like the North Pole, you know exactly what they mean. If instead, they described the office as “really cold,” you might not be as convinced to bring the sweatshirt because “really cold” is subjective and doesn’t have the same impact that “like the North Pole” has.

However, understanding common phrases can be a bit of a paradox. To understand what somebody means when they use a common phrase, you have to already know what the phrase means—and when you’re learning a new language or becoming acquainted with a new culture, you don’t have that luxury.

When you encounter a phrase you don’t understand, tools like The Phrase Finder can be very helpful.

Often, phrases are deeply rooted in the cultures that create them and because of this, their meanings aren’t always obvious to people outside those cultures. For example, “of flowers, the cherry blossom; of men, the warrior” is a translation of a common Japanese proverb. To somebody who doesn’t know the cherry blossom is considered the foremost flower in Japan, it isn’t obvious that this proverb is saying that warriors are the foremost among men. Instead, one might guess the proverb is saying that warriors are the most beautiful men or that the cherry blossom is the toughest flower.

Employing phrases effectively involves two different skills: understanding the parts of speech and how they operate within sentences and knowing when to deploy specific phrases to create the desired impact. Grammarly can help with both. Not only does Grammarly catch mistakes in grammar, spelling, punctuation, and more, but also its tone detector helps you get your word and phrase choices just right.