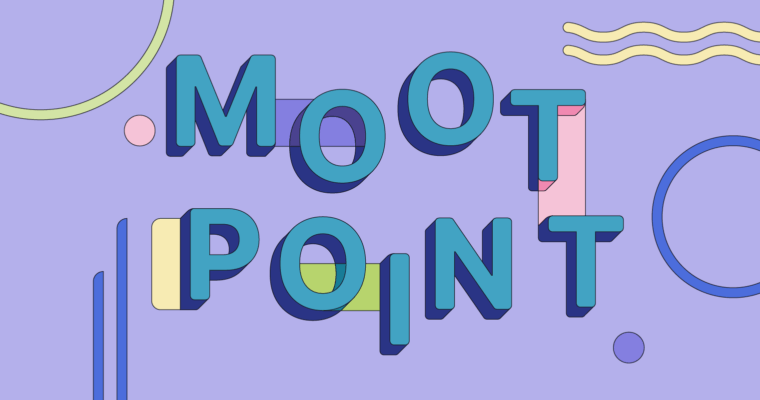 Have you ever been in the middle of a heated discussion and needed a strong way to end the argument while making your point known? If so, there’s an expression you need to know: moot point.

Often confused by English speakers for the similarly sounding phrase mute point, a moot point has its own history, usages, and clear definition.

Put simply, a moot point is a point or claim that doesn’t matter.

A fuller definition? A moot point is a fact that does not apply to the current situation. The fact may not apply for any number of reasons. For instance, the information could be doubtful, no longer current, or of no practical value. A moot point might also refer to a question that doesn’t matter very much because it’s unlikely that anyone will ever be able to answer it.

To make sure you fully understand this expression and use it correctly, let’s explore the uses, origin, and several examples of moot points.

A moot point can function as three different parts of speech:

The phrase moot point is best used when describing a situation or topic that could be discussed for an indefinite amount of time without ever coming to a clear resolution. Saying that something is moot means that continuing to debate the topic is a waste of time either because there is no chance any agreement will be reached or because it doesn’t matter.

You can also use moot point to refer to something that’s no longer relevant to the current conversation. For example, if you’re hoping to win the lottery and buy a vacation home but don’t win, the location of your vacation home is a moot point. In this case, the changing circumstances (not winning the lottery) have rendered your choice moot.

Where did moot point come from?

Moot originates in legal language, which is why it’s commonly used to refer to court cases or in arguments. Dating to the 1500s, moot point was used within legal exercises to describe a point that was open to further discussion or needed additional evidence.

Its medieval meaning has been carried on in the name of a popular ritual in law schools: the mandatory moot court, where students pose as lawyers on opposite sides of a case, preparing their arguments and then debating their points orally as if in a courtroom.

In subsequent centuries, the term was imbued with skepticism and became more typically associated with points or opinions that have questionable relevance. So, while it once meant “up for debate,” it is now mostly understood as something that’s trivial or irrelevant.

A moot point is sometimes mispronounced as mute point, making it a common linguistic egghorn. At first glance, moot and mute might seem like similar words, but they are pronounced differently and mean different things.

Mute rhymes with cute, whereas moot rhymes with boot. Moot means unimportant or not worth talking about, while mute means completely silent.

It’s easy to see why people may confuse the two words in this expression. If one were to say something is a mute point, their mistake would be understandable since the presumed meaning—“the point is silent”—still makes sense. However, it’s critical to know the correct phrase is not a mute point but a moot point.

Examples of moot point in a sentence

To get a better hold on how moot point can be used in conversation or in your writing, here are several examples of sentences that correctly use the phrase:

What is a moot point?

A moot point is a point, an aspect, or a topic that is no longer relevant or can no longer be questioned or debated.

How do you know a point is moot?

A point is moot when it no longer makes sense to continue debating it as the discussion will never reach a clear resolution or answer.

What are some examples of moot points?