What Is a Mass Noun? 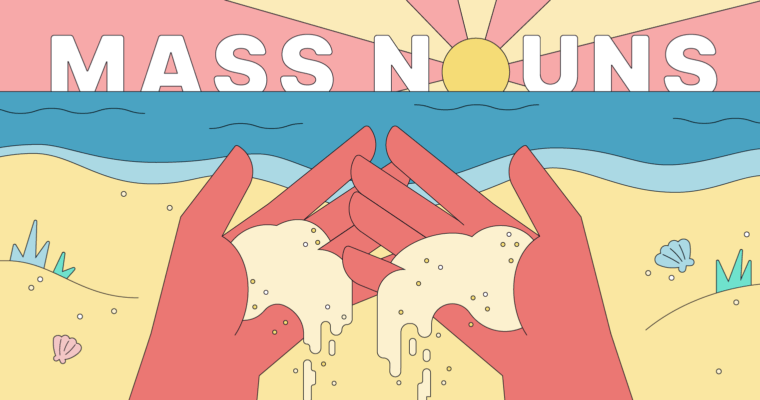 Mass nouns, also known as “uncountable nouns” or “noncount nouns,” are nouns representing something that cannot be counted. A mass noun doesn’t have a plural form, like the popular mass noun examples blood or clothing—it’s incorrect to say bloods or clothings.

It’s hard to tell the difference between mass nouns and normal nouns (called “count nouns” or “countable nouns”). In fact, sometimes it can be downright frustrating, even for English experts. So in this guide, we explain everything you need to know about how mass nouns work and how to tell them apart from other nouns.

What is a mass noun?

A mass noun is any noun that represents something impossible or difficult to count, such as air, rice, or intelligence. These nouns usually refer to abstract concepts (information, advice), physical objects that are hard to separate as individual objects (snow, sand), or general names for the sciences and sports (psychology, football).

Mass nouns are often confused with other subtypes of nouns, but they are not the same. For example, mass nouns are different from compound nouns, which are just common nouns composed of more than one word.

Likewise, mass nouns are different from irregular plural nouns, which are common nouns that do not use a standard -s or -es ending for their plural (such as child and its plural form children). In fact, mass nouns don’t have a plural form at all.

What about collective nouns? Although they seem similar, mass nouns and collective nouns are not the same. A collective noun is a noun that represents multiple things at once, such as team, family, or everyone. Mass nouns, however, represent things that are impossible or difficult to count, but not necessarily separate, such as energy, wood, or trash.

The majority of all nouns are countable nouns. These are normal objects that exist individually, making them easy to count. Some things, however, are not divided so conveniently: liquids, gasses, abstract concepts, natural phenomena, and granular substances, like sand.

Think about it like this: If you look at a group of cats, it’s possible to count how many cats there are, whether one cat or one hundred cats. That makes cat a countable noun or simply a “count noun.” On the other hand, if you look at salt, it’s very difficult to count all the individual grains of salt. That makes salt a mass noun, otherwise known as an uncountable noun or noncount noun.

How to use mass nouns in a sentence

Mass nouns don’t always use normal sentence structure. Let’s take a look at the most important rules for using a mass noun in a sentence.

Mass nouns don’t have plural forms, so they always use the singular form. That means you never add -s or -es to the end.

If a mass noun is the subject of a sentence, the verb should also be singular to maintain subject-verb agreement.

Countable nouns often use numbers to show how many there are, such as “two trucks” or “10,000 trees.” Mass nouns, however, do not use numbers; if you want to specify an exact amount, usually you can add a new word like “pieces” or “types.” A lot of mass nouns have specific words for when you want to separate them, like “slices” or “loaves” for bread or “grains” for sand, salt, wheat, and rice.

3  Mass nouns don’t use indefinite articles (a or an)

4  Some nouns can be either mass nouns or count nouns

Depending on how they’re used, some nouns can be either mass nouns or count nouns, but not at the same time.

For example, when paper is used to refer to a material, it is a mass noun.

However, when it is used to refer to an individual piece of writing, paper is a count noun.

GENERAL: Since the stock market crash, business is down.

SPECIFIC: All the businesses on Main Street remained open.

GENERAL: Time waits for no one.

SPECIFIC: How many times have I told you to close the door!

5  If you’re having trouble, try using a different word

Mass nouns can limit your communication, especially if you need to express a certain amount. Sometimes, you can simply replace a mass noun with a count noun to communicate more clearly.

For example, money is a mass noun that refers to currency in general. If you want to specify an exact amount, you should use a countable noun, like dollar.

If you’re confused about which words are mass nouns and which aren’t, you’re not alone. Below we list some of the most common mass nouns in English, divided by category. The more you familiarize yourself with these lists, the easier it will be to identify them in reading and in conversation.

Words with an asterisk (*) mean they can be either mass nouns or countable nouns, depending on how they’re used.

What is a mass noun?

Also known as “uncountable nouns” or “noncount nouns,” mass nouns are nouns representing things that cannot be divided or counted easily, such as air and sand, or abstract concepts, like fun and politics, among other categories.

When should you use a mass noun?

What are some examples of mass nouns?

Popular mass noun examples include money, water, clothing, wood, and help, although there are hundreds of others. General terms, like those used for weather, emotions, sciences, languages, and sports names are usually mass nouns, too.