Introducing the Snark Mark and Why You Should Use It

It sounds like something a wild-haired, strangely shaped Dr. Seuss character would leave behind after a big meal and a digestif, and it looks like something a frog might evolve from. But the snark mark has nothing to do with green eggs, ham, Sam-I-am, a cat, a hat, a house, a mouse, or even a hoppity reptile.

Rather, it’s one of the coolest, most utilitarian, but least-used punctuation marks around, and we think it’s worth lobbying for.

The easy-to-write—and type—symbol is simply a period followed by a tilde. It was created around 2007 by American typographer Choz Cunningham as an end-of-sentence mark that could denote verbal irony in writing. Its intended use is to help readers understand when the meaning of a sentence is actually very different to what the sum of its words seem to mean. 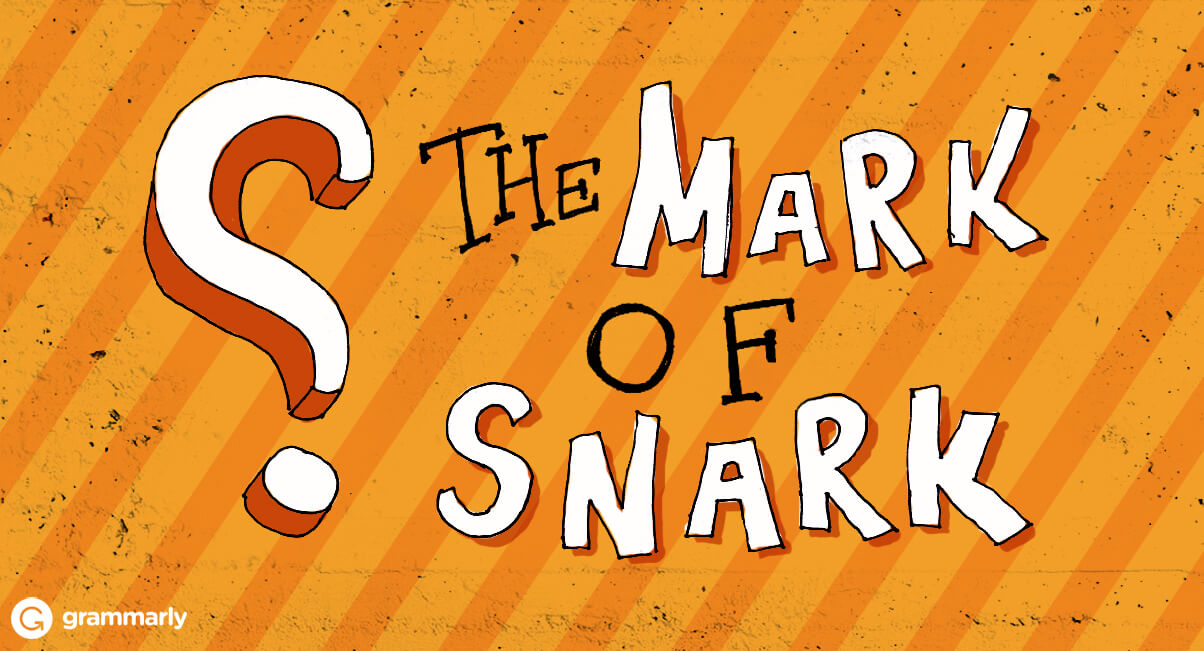 For example, if a family woke up on the first day of long-awaited beach vacation to find themselves in the middle of the worst hurricane of the century, one member might turn to another and quip,

“Brilliant weather, don’t you think.~ I’m so glad we came all this way.”

Taken at face value in a text passage, it could seem like the speaker is talking complete nonsense, but with the trusty snark mark, it’s immediately clear that they’re making a sarcastic joke.

Sarcasm, like hyperbole and understatement, is a form of verbal irony, and while it may be easy to express through face-to-face communication, it is much harder to convey to readers, who don’t have the context of body language, vocal intonation, facial expression, and other cues that can help indicate meaning.

In short, it could save a reader from thinking someone “literally died” after an embarrassing moment or felt like “a million bucks” after a chemotherapy treatment for stage-three pancreatic cancer.

According to the snark mark’s creator, who also took the liberty of establishing a website in its honor, the motivation for the quirky piece of punctuation grew from a need to evolve our grammar tools to match the way people have come to express themselves through online platforms:

From blogs to chat, more people are writing in personal environments and using verbal irony in ways where they might have once only tried to communicate face-to-face. Just like one takes skis and jackets on a trip to the snow, or doesn’t dig a hole without a shovel, the tools of our language should be whatever is appropriate to where we are going.

The snark mark wasn’t the first attempt to indicate irony or sarcasm though. As far back as the late seventeenth century, when British philosopher and believer in aliens John Wilkins proposed using an upside-down exclamation point to denote irony, there have been motions to create some symbol that can aid writers in signposting these types of sentences.

Unfortunately, despite the different marks being unpatented and copyright-free, none have succeeded in gaining a large public following. Even the snark mark, which is thought to be extra intuitive for its likeness to a sarcastic wink, has only resonated with the fringes of society. In fact, so few have paid attention to the über-useful punctuation mark that its once robust website is now no more than a meager placeholder page.

So, if you also think the strange but delightful little symbol would be a great addition to the grammar world, share this article with your friends on your own social media channels.

Stephanie Katz is a San Francisco–based writer who, contrary to the way it may seem, won’t correct your grammar over beers, coffees, or any other normal life interaction. She tells stories about health, history, travel, and more, and can be contacted via email at stekatz@gmail.com.