Imagery in Writing: Examples of Imagery as a Literary Device 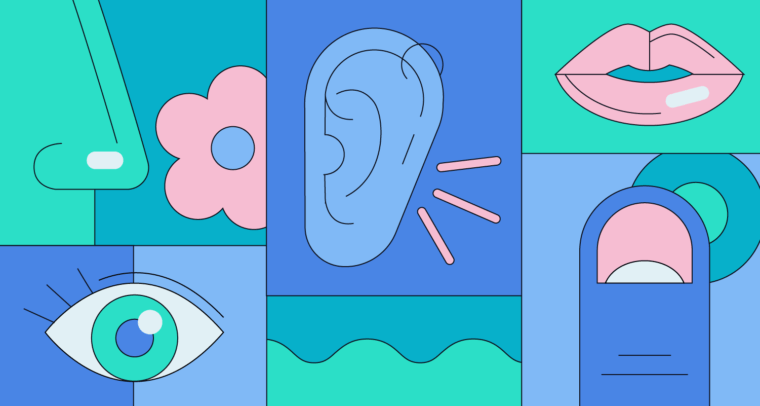 Have you ever read a passage about a sumptuous feast that made your mouth water, or felt your skin tingle while reading about the chill of a frigid winter night? Those reactions are the result of imagery. Imagery is language that appeals to the senses.

Imagery enhances writing by creating a physical response in the reader through sensory details. Language can elicit a psychological or intellectual reaction in a reader, and imagery is just one more tool a writer has to connect with their audience through sensation and emotion.

Take the following passage from a 1966 article by Joan Didion titled “Some Dreamers of the Golden Dream.” In this passage, Didion uses imagery to talk about the region’s wind:

“. . . a harsher California, haunted by the Mohave just beyond the mountains, devastated by the hot dry Santa Ana wind that comes down through the passes at 100 miles an hour and whines through the Eucalyptus windbreaks and works on the nerves.”

A passage with less imagery might depict the winds as being “hot and dry,” but Didion’s rich description goes farther, creating for the reader a feeling of roughness (appealing to touch) in the winds.

Writers use imagery to generate a physical or emotional response in the reader. One way to do this is through evocative adjectives. For example, using “shimmering” or “blinding” instead of “bright,” or “piercing” instead of “loud.” There is also a lot of potential for imagery in verbs since those are the words that move your narrative forward. Poignant and direct verbs will bring your reader along for the ride.

Another way to create imagery is through amplification. Amplification is a literary device that exaggerates or emphasizes a certain point. For example, you can tell your reader that you had a long drive home. Or, using amplification, you can tell them the road before you stretched through space and time, jutting into a seemingly endless succession of nights and days that blurred together and deposited you collapsed on your doorstep. That might be a little dramatic, but amplification is all about drama. It also creates the feeling of weariness (which is another appeal to tactile imagery if you imagine the weight of your eyelids).

However, too much imagery can lessen the effectiveness of your writing. If every night is the deepest, blackest night the narrator has ever seen; if every mango is the most succulent they’ve ever eaten; if every wind is the iciest they’ve ever felt, then your reader might get fed up with the drama of it all; if everything is special, then nothing is special.

Imagery doesn’t always require complicated descriptions. Sometimes it only takes a couple of precise words to tap into the reader’s senses. Often, imagery in a poem generates a strong reaction using just a few words. For example, the opening lines of Mary Oliver’s poem “At Black River” effectively send the reader’s imagination to the riverbank in a slim three lines:

What are the types of imagery?

Although not everyone can experience all these senses themselves, writing that appeals to the senses can still spark their imagination:

Visual imagery is imagery that you can see in your mind’s eye. It is the colors, brightness, shape, and movement of something. Visual imagery is the most common form of imagery in writing because it is the best way for a writer to describe settings and characters.

Auditory imagery evokes sounds. This might be the whir of machinery or the rush of a river. Any imagery that causes the reader to hear the scene is auditory imagery.

Tactile imagery is the imagery of touch. The roughness of a sweater, the coolness of fresh sheets, and the softness of a kitten’s fur are all examples of tactile imagery.

Gustatory imagery makes your mouth water. It is imagery that concerns taste—think about books with recipes, grocery shopping scenes, and dinner descriptions.

Olfactory imagery is the imagery of scent. When a writer describes the smell of freshly brewed coffee in the morning and the reader perks up, that’s an effective use of olfactory imagery. Alternatively, a writer can convey a sense of discomfort to the reader by describing the scent of rot or decay.

What’s the difference between literal and figurative imagery?

There are two types of imagery: literal and figurative.

Literal imagery appeals to the reader’s prior knowledge of something, describing it so precisely that the reader cannot help but feel (or see, hear, taste, or smell) the thing being described.

For example, look at this passage from Never Let Me Go by Kazuo Ishiguro:

There was bright sunshine, but it must have been raining earlier that day because I can remember how the sun was glinting on the muddy surface of the grass.

The language is straightforward (literal), but it is descriptive in a way that gives the reader a very clear image of the scene. The reader can see the sheen of a damp sunny day.

Figurative imagery relies on language like simile and metaphors to evoke the senses. In this passage from Winter in Sokcho by Elisa Shua Dusapin, the narrator usespersonification in her description of lunch to generate a tactile effect:

I started to eat, chewing faster and faster, swirling the makgeolli in my bowl with the tips of my chopsticks. Gulping down long drafts. The dense whiteness of the alcohol cutting my throat as it slipped down toward my stomach.

The reader can almost feel the sharpness of the alcohol through the author’s use of figurative imagery.

“Not that I had any great feast in mind: I would be stir frying thin slices of beef, onions, green peppers, and bean sprouts with a little salt, pepper, soy sauce, and a splash of beer—a recipe from my single days. The rice was done, the miso soup was warm, and the vegetables were all sliced and arranged in separate piles in a large dish, ready for the wok.” —Haruki Murakami, The Wind-up Bird Chronicle

“Adam went into the house and took off his black clothes. He could smell the sweet and now sickish odor of rum about himself. He removed all of his clothes and sponged his skin with yellow soap until the odor was gone from his pores.” —John Steinbeck, East of Eden

Imagery is a literary device that evokes the five senses to create a mental image.

How is imagery used in writing?

Imagery engages the reader’s senses to draw them more deeply into the writing. Powerful imagery can even provoke an emotional response in the reader.

What are the different kinds of imagery?

Imagery can be literal or figurative. Literal imagery uses precise descriptions to generate the image. Figurative imagery relies on figurative language, like similes and metaphors, to engage the reader. Imagery can also correspond to the senses.