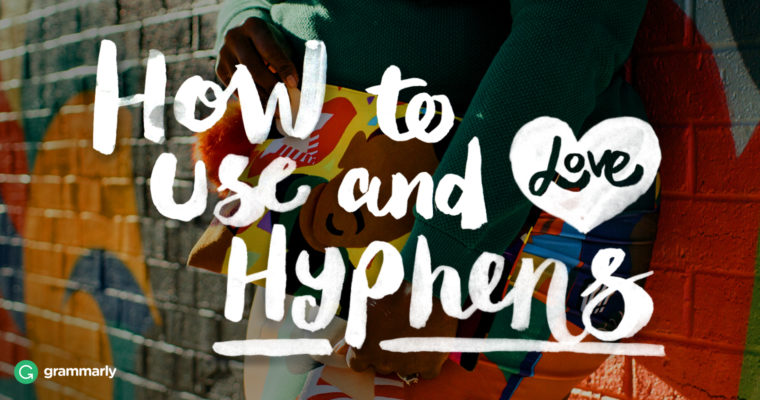 What Is a Hyphen?

Using hyphens to connect words is easy. Picking the right words to connect is a little harder. Let’s start with compound modifiers.

A compound modifier is made up of two or more words that work together to function like one adjective. When you connect words with the hyphen, you make it clear to readers that the words work together as a unit of meaning.

It’s recommended you don’t take down any load bearing walls when renovating.

In this sentence, it sounds like you shouldn’t take down any load that is holding up a wall. A hyphen should be inserted between load and bearing to make it clear that we’re talking about walls that are bearing a load.

It’s recommended you don’t take down any load-bearing walls when renovating.
This rock-hard cake is absolutely impossible to eat.
We’re looking for a dog-friendly hotel.
She makes one-of-a-kind engagement rings in her studio.
The newly-built house has state-of-the-art features.

Generally, you need the hyphen only if the two or more words are functioning together as an adjective before the noun they’re describing. If the noun comes first, leave the hyphen out.

This wall is load bearing.
It’s impossible to eat this cake because it is rock hard.
Is this hotel dog friendly?

You also don’t need a hyphen when your modifier is made up of an adverb and an adjective.

Hyphen With a Noun, Adjective Or Adverb and a Present Participle

When we combine a noun or adjective and a present participle (a word ending in ‑ing) to form a unit of meaning that describes another word, use a hyphen to make that unit of meaning clear.

There are some beautiful looking flowers in the garden.

Without the hyphen between beautiful and looking, your reader may stumble over the sentence. Perhaps there’s a new type of daisy called the “looking flower”?

There are some beautiful-looking flowers in the garden.
Fast-acting medication can be useful when one has a headache.

Don’t use a hyphen when the modifier comes after the noun it’s describing.

This medication is fast acting.

Don’t use a hyphen when you are combining an adverb and a participle.

Hyphen in a Compound Expression With a Noun and Past Participle

Compound modifiers that contain a past participle also follow the same rules as any other compound modifier. Use a hyphen when the compound goes before the noun it modifies:

The municipal government is funding a community-based education system.
Wind-powered generators can be excellent sources of electricity.
Many veterinarians find meat-fed cats to be quite healthy.
A well-known local singer will perform tonight.

Don’t use a hyphen when the compound comes after the noun it describes.

Hyphenated words tend to become closed compounds (single words with no hyphens) over time. Email instead of e-mail, for example, is increasingly common. If you aren’t sure whether a words is a closed compound or a hyphenated one, check your preferred dictionary.

Open compounds are typically made up of two nouns that are used together to represent a single idea. “Open” means that there is a space between the two words and no hyphen. A good dictionary is the best place to check whether a compound is open or not.

Numbers between twenty-one and ninety-nine should be hyphenated when they’re spelled out.

Hyphen in Compound Adjective With Numbers

When numbers are used as the first part of a compound adjective, use a hyphen to connect them to the noun that follows them. This way, the reader knows that both words function like a unit to modify another noun. This applies whether the number is written in words or in digits.

The president of the company gave a 10-minute speech to the Board of Directors.
He is knowledgeable in thirteenth-century politics.
The boy threw a rock at the second-story window.

However, a hyphen is not required if the number is the second word in the compound adjective.

He is a victim of Type 2 diabetes.
This elevator doesn’t go down to Basement 3.

Hyphen In Compound Adjective With Fractions

When using a fraction (e.g. half or quarter) as part of a compound adjective, it should be hyphenated so the reader understands which fraction is modifying which noun.

I half-wanted to commit a felony.
A quarter-million dollars is still a large amount of money.
You’ll need one-third of a pound of flour and one egg.
That’s a half-baked idea if I ever heard one!

Hyphen With Prefixes: Ex-, Self-, All-

Use a hyphen with the prefix ex- (meaning former).

Don’t sit Adam next to Martha! She’s his ex-wife!
Though he no longer held an official position, the ex-mayor still attended all the town’s functions.

Use a hyphen with the reflexive prefix self-.

Lying on the floor beside the plant he had knocked over and chewed on, the cat looked extremely self-satisfied.
Do you want a self-serve or a full-serve gas station?

Make sure you don’t confuse the prefix self- with the noun self.

The self serves no other.

When using all as a prefix, add a hyphen.

It’s a bad leader who thinks of himself as all-powerful.

Hyphens with High or Low

Low-flying airplanes contribute to the noise pollution in the area.
This car runs best on high-octane gasoline.
Low-income families often face more stress than their higher-income counterparts.
A high-interest savings account is one of the best ways to save money.