How to Write a Monologue in 7 Steps 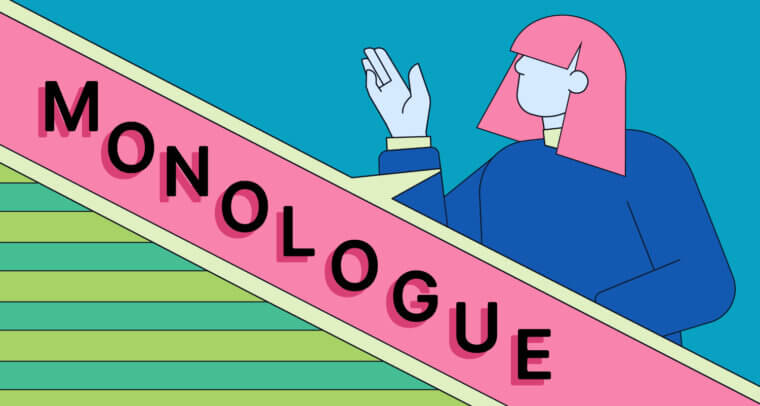 When you’re writing a play, you don’t have the luxury of prose to explain your characters’ thoughts to readers. Dialogue tends to do the heavy lifting when it comes to character development in drama, but what about situations where the audience needs to know how a character feels, but you can’t have the character say it in dialogue?

Write that character a monologue. A monologue allows a character to express their thoughts and feelings, and if it’s written well, it can not only shed insight into their psyche but also entertain readers or listeners.

What is a monologue?

A monologue is a speech by an individual that expresses their thoughts, feelings, and perspective. Through this expression, the monologue also illustrates the speaker’s character.

Monologues are often used in theater, but they aren’t limited to plays. Characters in books, movies, TV shows, and other mediums express themselves via monologues. Monologues appear in nonfiction settings, too, like stand-up comedy, vlogs, and one-person podcasts. When one person “gets the mic” and uses it to express their thoughts and feelings without having to respond to another character (which would make it a dialogue), it’s a monologue. Monologues come in different forms:

Think of scenes where the villain has the hero in their clutches and explains their entire plan. That’s a monologue. Or think of a song in a musical where the singer expresses their feelings, like the song “Maybe” in Annie.

With a monologue, you’re getting a subjective point of view. That’s why academic lectures and presentations typically aren’t considered monologues—the speaker isn’t discussing their own feelings; they’re discussing facts, findings, and theories.

How are monologues structured?

Monologues are structured like stories so that listeners or readers understand exactly what’s happening. A storylike structure, starting with a strong hook and building up to a climax, draws listeners in and prevents the monologue from feeling monotonous, and by extension, it keeps the character from feeling flat and boring.

What are the different types of monologues?

A soliloquy is a specific type of monologue widely used from the sixteenth to the eighteenth century in theater productions. In a soliloquy, one character expresses their thoughts and feelings to the audience, while other characters remain silent.

Other types of monologues

We briefly mentioned above that monologues exist outside the realm of drama and fiction. Think about the last time you went on a rant about something that bothered you, or you listened to a podcast where the host expressed their personal views on the episode’s topic. Those are examples of monologues. These are other types of monologues:

Write a monologue in 7 steps

Whether you’re writing a monologue to deliver yourself or through a fictional character, the process for writing one is the same. Essentially, you’re writing a brief story in the form of a speech. Like any other story, your monologue needs a beginning, a middle, and an end.

Before you start writing, think about your goal for the monologue. What is the character expressing?

The monologue’s subject matter and how the character feels about it determine everything else about the monologue: the character’s vocabulary, their delivery, their reactions to their own words, and the details they choose to include. One way to get yourself into the right mindset to write a monologue from the character’s perspective is to think about the kind of speech they’re delivering. An angry rant sounds very different from a ho-hum journal entry, and writing an impassioned plea for forgiveness is very different from writing a toast.

Once you have a subject for the monologue, think about the character delivering it. Who are they? What’s their background? What’s their relationship to the situation they’re giving a monologue about—are there other people involved in it?

If you haven’t already, spend some time getting into this character’s head. A monologue that feels incongruent with the character’s other speech and actions will only confuse and potentially turn off readers or viewers, so make sure the monologue is in character.

Once you’ve determined who’s listening to your character’s monologue—if it’s anyone other than the viewer—think about how the character will alter their speech accordingly. There are things they might not say aloud to a parent, boss, or love interest and might regret saying if they didn’t intend for the other character to hear them.

4 Hook listeners with a powerful beginning

Here’s where writing a monologue feels a lot like writing a story. You need to hook listeners with something that captures their attention, like a loud noise or jarring statement.

Moving past the opening and getting into the heart of the monologue, use storytelling techniques, such as figurative language and repetition, to keep listeners interested as the character progresses through their monologue. Build listeners up to a climax, the thesis of the character’s monologue, just like a good story brings readers to a climactic scene.

6 End on a strong note

Finish the monologue with a definitive statement that makes the character’s next move—and state of mind about it—clear. Your monologue’s ending shouldn’t be overly long or complicated. It should bring the monologue to a close and ensure that the viewer is clear on where the character stands.

Once you have a finished first draft, it’s time to edit, proofread, and revise. Take some time to work on other projects, then when you come back to your monologue, read it through completely. During this read-through, you might catch instances where you can make a different word choice for a stronger effect or reorder sections to make the monologue’s flow more logical.

First, edit the “bigger picture” parts of your monologue, like its paragraph structure and focal points. Then, once you have a second draft, proofread it. When you proofread, you’re looking for grammatical and spelling mistakes. Fixing these is important even if you plan to read the monologue aloud (or have an actor read it aloud) because even a seemingly small mistake can trip the speaker up and undermine your words’ impact.

All the world’s a stage,

And all the men and women merely players;

They have their exits and their entrances;

And one man in his time plays many parts,

Well, I don’t own pearls. Lord knows you don’t pay coloreds enough to afford pearls! And I work like a dog day and night, living on coffee from a pot none of you want to touch! So, excuse me if I have to go to the restroom a few times a day. —from Allison Schroeder and Theodore Melfi’s Hidden Figures screenplay

We need more fruitcakes in this world and less bakers

We need people that care

Song in a musical

You were once my one companion

You were all that mattered

You were once a friend and father

Wishing you were somehow here again

Wishing you were somehow near

If I just dreamed

Somehow you would be here

—from Andrew Lloyd Webber’s “Wishing You Were Somehow Here Again,” Phantom of the Opera

What is a monologue?

A monologue is a speech by an individual that expresses their inner thoughts, feelings, and perspective. This individual can be an actual person or a fictional character.

How is a monologue structured?

A monologue is structured similarly to a story. It begins with a hook that captures listeners’ attention, then guides them through a narrative that builds to a satisfying climax, and then reaches a conclusion that ties up any loose ends.

What are some different kinds of monologues?