If we had to describe professional writing using a single word, that word would have to be “clear.” Professional writing isn’t called professional because all other types of writing are unprofessional. It gets the name because it follows standards and rules that are important in certain professions, and there’s at least one standard that’s common to all of them—clarity of meaning. There should be no ambiguity of meaning in a medical research report, a legal case study, or a journalist’s report about an important event.

Here’s a tip: Want to make sure your writing always looks great? Grammarly can save you from misspellings, grammatical and punctuation mistakes, and other writing issues on all your favorite websites.
But sometimes very small things, such as commas, can influence meaning in a way that’s not intended. People sometimes don’t know the exact rules about when to use commas. Many people are also unsure about the rules for the phrases “such as” and “as well as,” which is why their use in professional writing should always be double-checked. 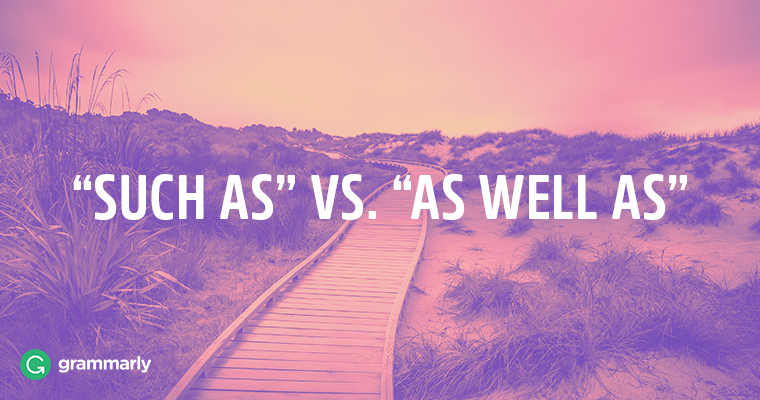 When to use “such as”

When you want to give an example for something you are writing about, you might use “like” as a conjunction.

GDP in developing countries like Vietnam will continue growing at a high rate.

In professional writing, however, you could use the phrase “such as” because it sounds more formal.

GDP in developing countries such as Vietnam will continue growing at a high rate.

When to use “as well as”

You will receive the product packaging and the new design concept tomorrow.

You will receive the product packaging as well as the new design concept tomorrow.

“And” and “as well as” are not completely interchangeable. Using “and” to join two or more subjects will create a compound subject, and any verbs used with them should be plural.

The packaging and the new concept are going to be on your desk by tomorrow.

“As well as” doesn’t create a compound subject.

The packaging, as well as the new concept, is going to be on your desk by tomorrow.

The most important thing to remember when using “such as” and “as well as” in professional writing is that they generally don’t require commas unless they are part of a nonrestrictive clause. Using commas with them might change the meaning of the whole sentence.

GDP in developing countries such as Vietnam will continue growing at a high rate.

This is a restrictive example. In this sentence, it is clear that developing countries that resemble Vietnam will see continued GDP growth at a high rate.

GDP in developing countries, such as Vietnam, will continue growing at a high rate.

For purposes of clarity, you can take the nonrestrictive clause out of the sentence and use the information it contains to create a new sentence.

GDP in developing countries will continue growing at a high rate. Vietnam provides a perfect example.

ProfessionalsHow to Write a Memo in 8 Steps

ProfessionalsHow to Write Meeting Minutes, with Examples
Writing, grammar, and communication tips for your inbox.