How to Fix Incomplete Comparisons 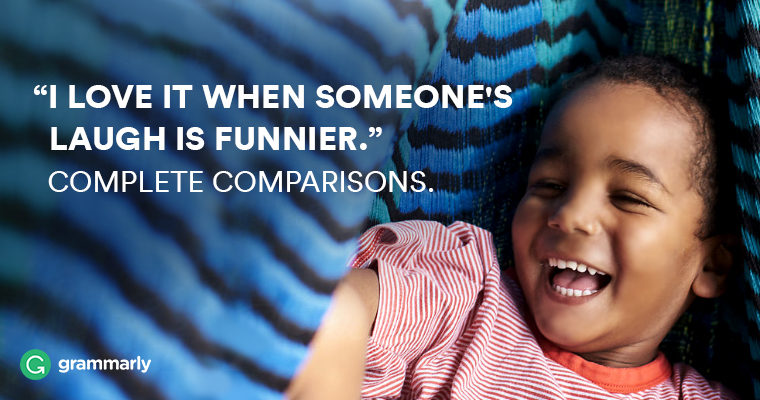 You might have noticed some sodas that are advertised as having 50 percent less sugar in them. Or some foods that apparently have 17 percent less fat. Or some dishwashing liquid that foams 30 percent more and can thus clean more dishes. And while there’s nothing wrong with cutting your sugar and fat intake or using a dishwashing liquid that offers great value for your money, if you were to use the products that advertise this way you would never really know whether you’re making better choices for your diet and cleanliness or not.

Why? Because of the incomplete comparisons, of course.

The very basic rule of creating comparative sentences is that you need to have at least two elements that you’ll compare in the sentence. Here’s an example:

In the first sentence, readers will automatically assume that you’re comparing Jenny’s bike to Mike’s bike. But if you’re comparing Jenny’s bike to something else—say, Mike’s unicycle, his car, or even his couch—your readers won’t be able to tell. Context doesn’t always make it clear. In the second sentence Mike is missing entirely, and we know only that Jenny’s bike is faster than something. That’s not a comparison, and neither is saying that something has 50 percent less fat or sugar in it.

Luckily, incomplete comparisons are easy to fix. You just need to make sure that the comparative sentence is symmetrical, so to speak. If you have Jenny’s bike on one side of the comparative adjective, you should also have a bike (or unicycle, or car, or whatever you’re comparing) on the other side of it. You can have more than one bike, though, and you can say that Jenny’s bike is faster than Mike’s and Paul’s bikes. You can even say that Jenny’s bike is faster than Mike’s bike, but not as fast as Paul’s bike. As long as you remember that comparisons need at least two elements to work, you’ll stay on the safe side.

And as for the advertising-speak that contains 50 percent less information than needed to create a comparative sentence—just skip to the nutrition labels. Unless it’s the dishwasher liquid, that is.