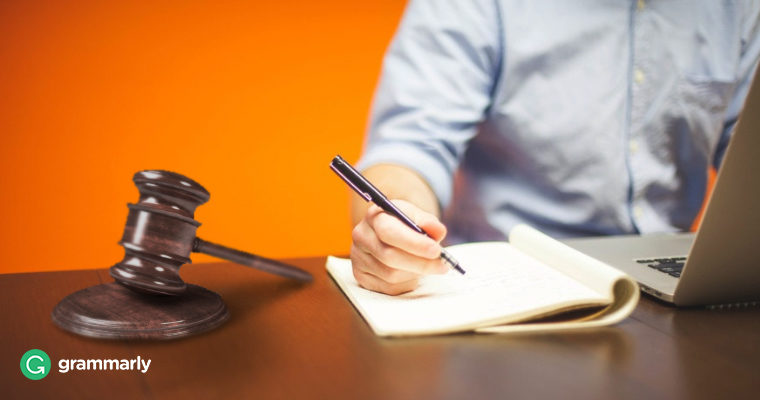 Grammar is important, but it’s not a matter of life or death. Or is it? How does grammar influence the legal system? Researchers decided to find out by conducting an experiment. Does the wording of the description of a murder affect whether jurors classify a crime as first- or second-degree murder? According to their findings, “legal judgments can be affected by grammatical aspect but [most significantly] limited to temporal dynamics… In addition, findings demonstrate that the influence of grammatical aspect on situation model construction and evaluation is dependent upon the larger linguistic and semantic context.” In other words, grammar plays a part, but the study participants also paid attention to context when making their decisions. Is grammar as significant in real-life legal cases?

For Avondale Lockhart, whether or not he would spend the next ten years of his life in prison came down to a question of grammar. Federal law requires a minimum ten-year sentence for repeat sexual offenders convicted of “aggravated sexual abuse, sexual abuse, or abusive sexual conduct involving a minor or ward.” How would you interpret the phrase? Does “involving a minor or ward” apply only to the part of the sentence immediately preceding it (abusive sexual conduct) or does it apply to all the crimes listed? Lockhart, previously convicted of attempted rape, contended that because his previous crime wasn’t against a minor, the minimum 10-year sentence did not apply to him.

In Canada, a cable television provider and a telecommunications company disputed the import of a single comma in their contract. Bell Aliant, the telephone company, wanted to cancel their contract with Rogers Communication. This is the sentence in question:”This agreement shall be effective from the date it is made and shall continue in force for a period of five (5) years from the date it is made, and thereafter for successive five (5) year terms, unless and until terminated by one year prior notice in writing by either party.” How do you understand the sentence? Does Bell Aliant have the right to cancel the contract at any time, provided they give one-year notice? Or does the one-year notice apply to cancellations enacted after the first five-year term? The difference amounts to about $900,000 US dollars.

How well can you explain the passive voice and the subjunctive mood? In an article published by the Loyola University Chicago Law Journal, law professor Robert C. Farrell observes that “there is widespread unfamiliarity among lawyers and law students with the terminology that describes verb forms.” In most contexts, this doesn’t matter. Native speakers use and understand grammar constructs instinctively, even if they cannot explain why saying something in a certain way is correct. However, in “a small percentage of cases, including some important ones, courts explicitly rely on grammatical terminology to explain their decisions.” If law students aren’t familiar with the classifications of grammar, how will they respond to arguments based on grammatical interpretation? The article highlights one case where grammar played a life-or-death role. In 1995, a jury convicted Michael Kelly Roberts of aggravated premeditated first-degree murder and first-degree felony murder. He received a death sentence for the crimes. Did the jury really have the authority to issue a capital punishment? Notice the passive voice in this phrase from their instructions that defines aggravated first-degree murder: “[when the] murder was committed in the course of, in furtherance of, or in immediate flight from, a robbery … or a kidnapping.” According to Robert’s defense, the use of passive voice mistakenly conveyed the impression that a death penalty could be applied to the accused even if he was not an active or major participant in the illegal events. Because there was another man involved, no one could say who had actually committed the murder.

Are you wondering about the verdicts of the cases mentioned? In the case of Avondale Lockhart, the Court applied the “rule of the last antecedent,” which states that “a limiting clause or phrase . . . should ordinarily be read as modifying only the noun or phrase that it immediately follows.” While the rule can be overruled by other “indica of meaning,” the Court found nothing to indicate that it should be reversed in this case. Lockhart received the minimum ten-year sentence. The Canadian telephone pole contract dilemma reached a resolution when Rogers Communications presented the French version of the same contract. The wording in the French contract was clear enough that the court reversed an earlier decision allowing Bell Aliant to terminate the contract before the end of the five-year term. As for Michael Kelly Roberts, the courts vacated his death sentence and reversed his conviction of first-degree murder. His first-degree felony murder conviction was upheld. How did the rulings match your interpretations of the legal language?