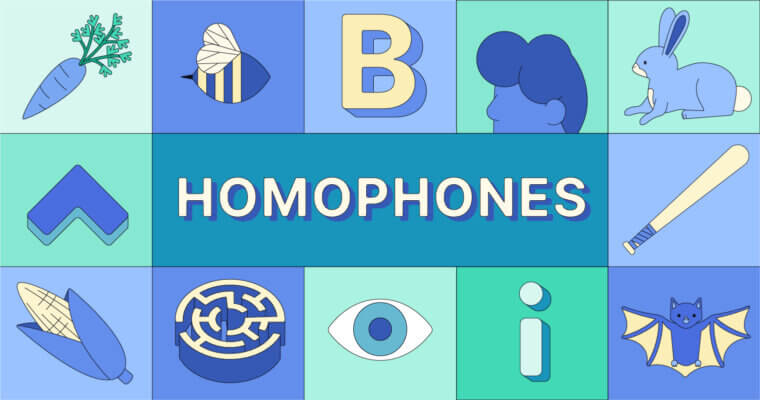 Homophones are words that are pronounced the same way but have different meanings. Sometimes they’re spelled identically and sometimes they aren’t.

When you’re learning a new language, homophones can be tricky. They can even be confusing if you’re a primary speaker of a language, especially when you’re writing. Read on to learn more about homophones, commonly confused homophones, and how to be a homophone pro.

Not all homophones are the same. When two words sound the same, but are spelled differently and have different meanings, they are known as homonyms. For example, “knead” and “need” are homonyms as well as homophones.

Homophones can be further classified as homographs and heterographs.

Heterographs are words that are spelled differently and have different meanings, but are still pronounced the same way. “Flower” and “flour” are examples of heterographs.

In contrast, heteronyms are words that are spelled the same, but pronounced differently and have different meanings. An example is “tear,” as in “he had a tear in his eye,” and “tear,” as in “please tear up the paper”.

And then there are oronyms, a category of phrases that is sometimes grouped with homophones. Like homophones, oronyms sound the same, but they have different meanings—and they don’t always sound identical. “World peace” and “whirled peas” are examples of oronyms.

There is also a category known as pseudo-homophones. These are pairs of words that sound identical, but one of the words is not an actual, recognized word. An example of a pair of pseudo-homophones is groan and grone (“grone” is an obsolete form of “groan”). Pseudo-homophones are more esoteric, as they’re typically used in lexical decision tasks to measure how quickly a study participant recognizes a word during psychology and psycholinguistic studies.

Synophones are words that sound almost, but not quite, the same and have different meanings. Assure, ensure, and insure are synophones, for example.

Because they sound the same, it can be easy to get homophones mixed up and use the wrong one in your writing. Below are a few of the most commonly confused homophones in English:

Then is an adverb used to describe where something fits into a series of events:

Than is a conjunction or preposition used to compare two things:

Three commonly confused English homophones are to, too, and two.

To is a preposition, infinitive marker, or an adverb that indicates movement or that the verb being used is in the infinitive form:

Two is the number that falls between one and three:

Three other commonly confused English homophones are there, their, and they’re.

There is an adverb that describes a location or position:

Their is a possessive pronoun:

They’re is a contraction of the words “they” and “are”:

Your is a pronoun that shows possession:

You’re is a contraction of the words you and are:

More of the most common English homophones

Why do languages have homophones?

There are a few different reasons why languages have homophones. Some languages have significantly fewer phonetic syllables than others and this limited syllable set makes homophones almost inevitable. Chinese is one such family of languages, and with Chinese dialects’ emphasis on context, homophones play an important role in communication and understanding.

In other languages, such as English, homophones largely stem from words’ pronunciations changing over time. All languages evolve as people migrate, mesh with new cultures, develop new technology and new needs, and integrate new languages with their own. Languages evolve into distinct regional dialects as well and sometimes, words that are homophones in one dialect aren’t homophones in another. One example of this in US English are the words “marry,” “merry,” and “Mary.” In some parts of the US, these three words sound the same and in others, they have distinct pronunciations.

Many of today’s homophones didn’t start out as homophones. One example of English homophones that were initially pronounced differently is knight and night. The word “knight” was spelled “cniht” in Old English and it was related to the Dutch word “knecht,” both of which pronounce the letter “k” at the beginning of the word. “Night,” on the other hand, evolved from the Old English “neaht” and “niht.” Following the Norman Invasion and English’s shift away from its Germanic roots, the pronounced “k” sound began to drift away, leaving us with a silent letter at the beginning of the word “knight.” Other words, like “knot,” “knife,” and “knit,” followed a similar progression as English evolved from a strictly Germanic language to one with significant Latin influences.

How are homophones used?

Nearly every language has homophones. From language to language, how they work—and their cultural significance—varies. In many languages, homophones are a key part of puns and other types of wordplay.

What do you call a piece of wood that has nothing to do?

Get it? The piece of wood is a board and, because it has nothing to do, it’s bored.

The joke isn’t so funny written out like this, but it at least garners a groan when spoken aloud. And the very thing that makes it amusing is the thing that makes it and similar jokes tough for new language learners: the homophone. Beyond grasping humor, homophones can make it difficult for multilingual speakers to grasp nuance when speaking, listening, and writing.

If you’re having a conversation or reading text in a new language and a word sounds out of place, it might be a homophone. Ask the speaker or sender to clarify the word or take a moment to look it up. Mastering a new language’s homophones can be a lengthy, complicated process, but it’s a key part of developing true fluency in a new language.