Here’s When to Say ‘Happy Holidays’ Instead of ‘Merry Christmas’ 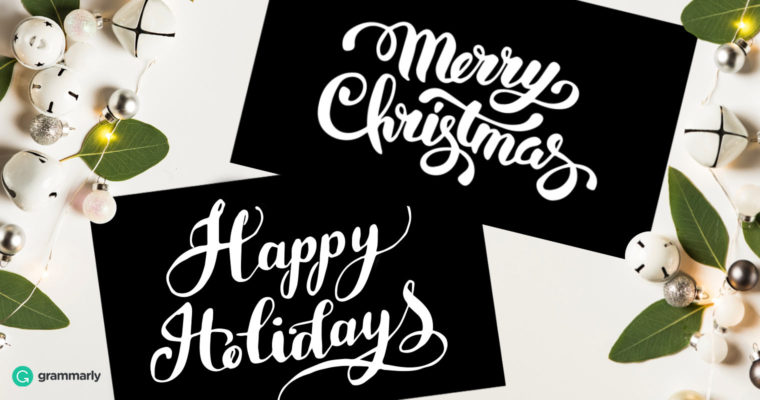 It’s that time of year… when you dread every interaction because you don’t know whether to say “Merry Christmas,” “Happy Holidays,” “Season’s Greetings,” or maybe some secret salutation you don’t even know yet. So what are you supposed to say?

In general, “Happy Holidays” is accepted as the broadest and most inclusive greeting at this time of year. If you know someone celebrates Christmas you can go with “Merry Christmas,” but ‘tis the season for interacting with strangers (selling to them, buying from them, bumping into them on your way out of Target). You’re also likely to express holiday wishes to folks you might not know very well, like a colleague or your child’s teacher. And when the time comes to wish them well, it’s usually best to go for general.

Why does the “Happy Holidays” or “Merry Christmas” debate exist?

In the US, the period from late November until early January is lumped together as “the holiday season.” You’ve got your biggies like Thanksgiving, Christmas, Hanukkah, and New Year’s, plus dates that get not quite so much attention, like Kwanzaa, the Winter Solstice, Boxing Day, and Festivus. With that many holidays crammed into a few weeks, it makes sense to go for the general holiday wish.

True, there aren’t too many people who celebrate all of those holidays. But the point is to acknowledge that different people celebrate different holidays

Also, this debate isn’t just about words: it’s about being politically correct and inclusive of diverse beliefs and traditions across the country.

Although Christmas has been the most widely celebrated holiday in the United States for decades, the US is more diverse than it’s ever been before, so not everyone celebrates Christmas. Some people get a Christmas tree, but don’t have any traditions associated with Christianity. And plenty of people who live in the US have a different religious tradition, or no religious tradition at all.

If you say “Merry Christmas” to someone who celebrates Hanukkah, Kwanzaa, or nothing at all, you could make them feel marginalized: like their own beliefs aren’t valued or respected by society. And that’s not a good way to feel around the holidays.

What about saying “Happy Holidays” to someone who celebrates Christmas—won’t that make them feel bad, too? Unfortunately, there’s a chance of that, especially because Christmas is still so widely celebrated. But one holiday being more popular than the others doesn’t mean you should ignore the other ones.

Think of it this way: “Happy Holidays” includes Christmas as one of those holidays, and “Merry Christmas” leaves out everything other than Christmas.

If you live in an area with mostly Christians, or if you know someone has a Menorah and not a Christmas tree, you can generally feel safe with a “Merry Christmas” or “Happy Hanukkah.” But if you don’t know, or aren’t quite sure, it’s probably best to stay general rather than taking a guess and potentially making someone feel bad.

So, “Happy Holidays” or “Merry Christmas”?

A good rule of thumb: if you don’t know what someone celebrates, use the broader term. It’s as easy as that.

It’s not an insult to Christmas. It’s an inclusive way of wishing someone well and showing that you respect and value whatever tradition they observe. Actress and comedian Whoopi Goldberg agrees:

If Whoopi says so, there’s got to be something to it.

In a time of year that’s already hectic, wondering what to wish people can be yet another stress. But don’t forget that even with all the errands, tasks, and projects that need to be finished up by the end of the year, this is also a season that’s supposed to be happy or merry. You’re wishing someone a positive time of year. What matters most is the sentiment, not the specific holiday they celebrate.

Sure, there’s the occasional stickler who demands specificity—“What holidays do you mean?” Still, most people will see your attempt at sharing seasonal cheer and shoot you a smile, rather than insisting you clarify exactly which holiday you have in mind. Even if you celebrate one holiday and the person you’re talking to observes another one, by using the inclusive term, you’re doing your part to make sure everyone’s holiday actually is as happy as it can be.