What Does Duly Noted Mean?

Duly noted means properly recorded or acknowledged. However, if used sarcastically, it can also mean the opposite.

Requests can wear you out. Help me with this . . . Do this for me . . . It may seem like everyone needs something that only you can provide. On the other hand, people also may want to give you suggestions on how to accomplish your tasks. I think you should do it this way. I would do it like this, if I were you. Believe it or not, The Simpsons may be able to help you cope. Mrs. Krabappel, Bart Simpson’s teacher, demonstrated the use of one handy phrase that you should know: “duly noted.” After Homer promises Bart that he can go to Kamp Krusty if he earns at least a C average on his report card, Bart is understandably anxious to see how he did. In this exchange he tries to persuade his teacher to record high scores:

Here’s a tip: Want to make sure your writing always looks great? Grammarly can save you from misspellings, grammatical and punctuation mistakes, and other writing issues on all your favorite websites.
Bart: Mrs. Krabappel, in figuring out my final grades, I hope you’ll note that all of my textbooks are being returned in excellent condition. In some cases, still in their original wrappings! Mrs. Krabappel: Duly noted. 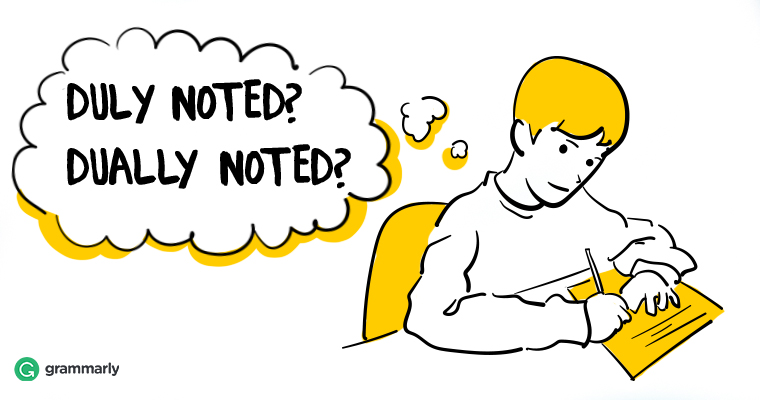 What Does “Duly Noted” Mean? What exactly does this phrase mean? Let’s define duly and noted as individual words.. Duly is an adverb. In the context of this expression, it means in the proper way and at the correct time. To “note” something means to record it. For example, a secretary might make sure that the minutes of a meeting are duly noted, written down in the proper manner. Here is an example of duly noted in a sentence from an article about a county tax petition:

[The petitioners] objected to reviewing all the signatures in the petition; protested that county clerk employees are not handwriting experts; and said none of the employees should be involved because they are members of the AFSCME union. “The objection was duly noted and we began,” Ming-Mendoza said.

Of course, Mrs. Krabappel didn’t conscientiously write down Bart’s silly observation. In fact, people most often use “duly noted” as a simple acknowledgment of an opinion. But sometimes it means to take notice of something, or to call attention to it. For instance, this quote from Deseret News mentions a coach paying heed to the positive attitude of one of his players:

It’s a contribution duly noted by head coach Shawn Olmstead, who gets a bit emotional when talking about the contributions made by his less-heralded group of seniors.

Do you think sarcasm is rude? If you use duly noted facetiously, some people may find it rude. Sure, Mrs. Krabappel was acknowledging the pristine condition of Bart’s textbooks. But she wasn’t giving him any commendation for it. She said “duly noted,” meaning that what he said didn’t merit any attention. (If you wondered whether Bart’s untouched study material gained him any favor with his teacher, you probably don’t watch the show. He missed his C average by a longshot.)

A conversation between two characters in Identity, a novel by Ingrid Thoft, typifies this tendency to use “duly noted” as a form of sarcasm:

A few words look like duly so you have to be careful when you write it. For example, accidentally adding a second L would make dully noted! Dully means sluggishly, boringly, or barely . . . In a professional context, you wouldn’t want to tell your boss that you barely acknowledged what she said! Neither do you want to confuse duly with dually—a word that means “made of two people or parts, relating to two.” Because the base of duly is due, some people add an E to make duely, but that is not a word.

Now, you have a go-to phrase when requests and suggestions come your way. You can use “duly noted” to say all of these things: I wrote what you just said in the appropriate record. I acknowledge your opinion. I heard you, and I don’t really care. How will you use “duly noted”?