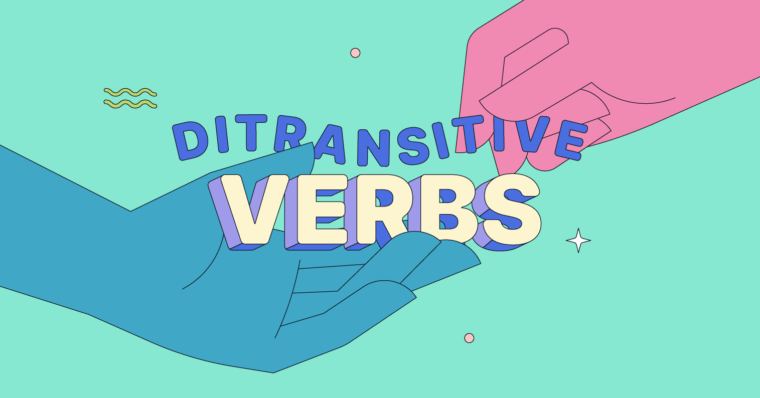 Verbs aren’t just verbs. As you know from studying the different parts of speech, just about every word in the English language fits neatly into a specific category based on its role in a sentence and, in some cases, how it interacts with other words to direct a sentence’s meaning.

What is a ditransitive verb?

You might be wondering what it means for a verb to take an object. Translation: for the verb’s meaning (and its sentence’s meaning) to be clear, it needs to be followed by a noun or a pronoun. This noun or pronoun is the object of the sentence. Here’s one example of a ditransitive verb in action:

They must push the canoe into the river.

See how if you eliminate “the canoe,” the sentence doesn’t make much sense? You’re left asking, What do they have to push?

Verbs aren’t the only part of speech that are categorized according to the roles specific words play in sentences. Prepositions, for example, can be divided into categories like prepositions of direction and prepositions of space. Understanding a word’s subcategory can help you understand how to construct a grammatically correct sentence.

I made pasta for dinner.

We all want candy.

Whether a verb is transitive or intransitive can depend on the context in which it’s used. For example, we can rework the last example sentence to turn “play” into a transitive verb:

Sheila sent a package to Joe.

Sheila sent a package to Joe.

In these examples, the verb sent is a ditransitive verb because it’s followed by both a direct and indirect object.

An object complement is a word that describes or renames the direct object in relation to the verb. Here are a few examples of object complements in sentences with attributive ditransitive verbs:

The results made Winona sad.

We dubbed Magda Queen of the couponers.

Ditransitive verbs in the active voice and the passive voice

Passive voice: Soraya was asked a question by Damien.

What are ditransitive verbs?

How are ditransitive verbs used with direct objects?

How are ditransitive verbs used with indirect objects?

What are attributive ditransitive verbs?

No matter what you’re writing, write with the confidence that spelling and grammatical mistakes won’t detract from your words. Grammarly catches mistakes you might have missed on your final proofread and suggests changes to improve the readability of your work. It also provides helpful feedback on tone, so you can say exactly what you mean.