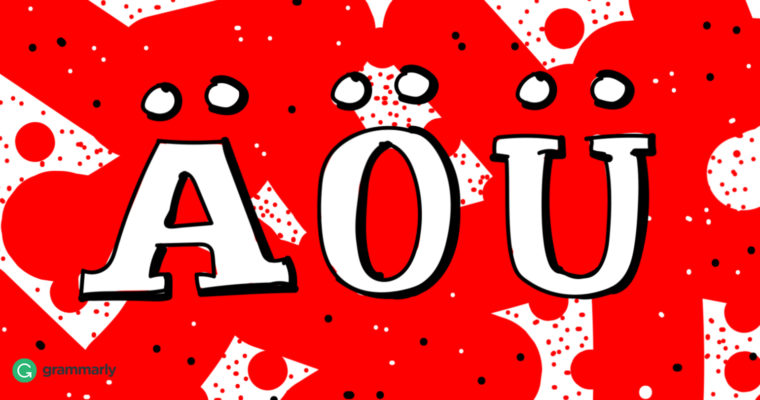 The New Yorker is a quirky magazine. Sure, it’s a go-to when you’re looking to read high-quality writing, but the magazine’s style is full of peculiarities. There are the double consonants where you don’t expect them, as in the word “travelled.” There’s the spelling out of numbers, even the really long ones. And there are the words like “coöperate” and “reëlect,” which are written with two tiny dots over the second o and the second e. Hang on, what exactly do you call those two little dots? A diaeresis. The New Yorker is one of the rare publications that still use the diaeresis sign.

But what is this sign? Does it make sense to use it? And why does it appear so often in the names of hard rock and heavy metal bands, from Blue Öyster Cult to Motörhead?

What Is the Diaeresis?

The diaeresis—also spelled “dieresis”—is a type of sign that’s called a diacritic. (It’s important to note, that diaeresis is also a poetic break in verse; however, we aren’t going to cover that usage here.) Diacritical marks are added to letters to indicate that there is something unusual about the way they are pronounced. A diaeresis is used when you have two vowels next to one another that should be pronounced as separate syllables instead jumbled together as a diphthong. The word “naïve” is a good example. When you pronounce it, you can clearly hear how it’s divided into two parts—na- and -ive. The diaeresis tells you not to combine the two vowel sounds and pronounce the word as one syllable that sounds like “knave.” Essentially, the diaeresis tells you “hey, this vowel is pronounced separately from the other one.” It is occasionally used on vowels that stand on their own to point out that they should be pronounced even though logic might say they shouldn’t, as in the surname Brontë.

Should We Use the Diaeresis?

The short answer is no. The diaeresis is considered obsolete by most authorities in the English language. In some cases, the diaeresis is replaced by the hyphen. Where The New Yorker writes coöperate, other publications prefer co-operate, especially outside the United States. In other cases, you’ll find it written simply as cooperate. People generally know how to pronounce these words. But even if they didn’t, do you think that a diaeresis would be of any help now, when it’s been out of use for so long? So no, there is no reason to use a diaeresis unless it’s really called for as part of a name. So why do heavy metal bands still do it? Well, they actually don’t. The two dots above the o in Motörhead isn’t actually a diaeresis—it’s an umlaut. It’s also a diacritic, but it represents a completely different change in the pronunciation of the letter it marks. Using it in the names of heavy metal bands is a practice that’s so well established that you can read entire articles about the heavy metal umlaut—the umlaut that does nothing except look awesome.