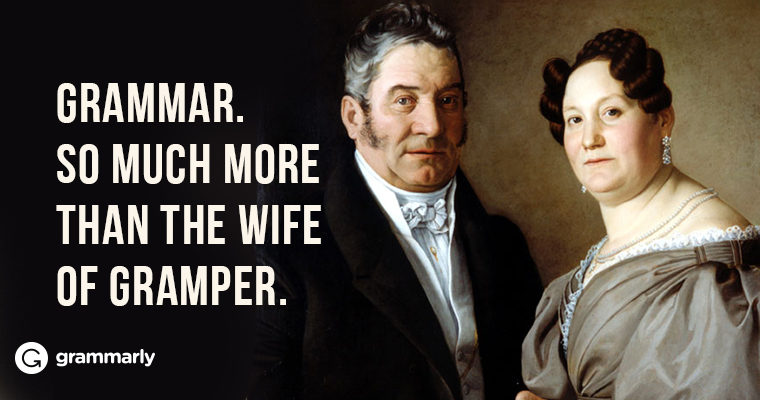 Grammar is the foundation for all of our writing and speaking in English. Having a solid foundation makes it easier to achieve fluency. Native speakers can benefit from a refresher on English grammar basics, which they may have forgotten over time. Refreshing the basics is one way to help break bad habits in writing.

The easy way to remember nouns is that they refer to people, places, or things. Even intangible or abstract concepts like ideas or thoughts are things. In the following sentences, the nouns are highlighted:

Sally doesn’t use an iPhone . Jared doesn’t eat subs . The Earth is not the center of the universe .

Adjectives are descriptive words that add detail to a sentence. They can give important or necessary information (e.g., Please hand me the blue paper), or they can just make the sentence more interesting (e.g. A frigid wind blew around the icy town). Adjectives describe nouns. Please sew the red dress. The weather is hot and humid . The stuffed toy is fuzzy and round .

Verbs are action words: that’s a rather simplified explanation, but it’s the clearest one. Verbs tell you what the subject of the sentence is up to.

He ran into the wall. She buys new shoes. The cat licks its fur.

Adverbs describe verbs, adjectives, or even a whole sentence. Adverbs often end with the suffix -ly (for example, badly, hungrily), but some look the same as their adjective forms (for example, the word fast is used as both an adjective and adverb).

Prepositions are little words that tell where or when (among other things) something is. The monkey is on his back. The glue is behind the board. The dreamcatcher is above the bed.

Conjunctions are words like and, but, and or that connect concepts, clauses, or parts of sentences.

I wanted to meet her there on time, but I got stuck in traffic. You can’t wear socks and sandals.

Interjections are words like wow and yay. They’re sounds we make to convey extreme emotion or to create emphasis when we’re talking, sometimes when we can’t think of a good way to express ourselves. The problem with interjections is that they require a great deal of context to be understood. For instance, hey can mean hello, or that’s great, or stop doing that. Hey! How’s it going? Wow! Those fireworks are impressive. Yay! I passed calculus!

(In this example, the subject is in bold and the verbs are italicized.)

My brother is a doctor. My parents are yoga teachers.

When a pronoun replaces a noun, the noun is called an antecedent. On Michael’s first day of work, he was a little nervous. Michael is the antecedent and he is the pronoun.

The subjunctive is a form verbs can take to express conditions that are hypothetical or not true. It’s not a verb tense. The subjunctive form usually uses the third-person form of the verb with the ‑s dropped. When using the verb “to be” in the subjunctive, the present tense is be and the past tense is were.

The subjunctive is used with certain expressions that imply a good or bad quality or an imperative. Often, the subjunctive verb is preceded by the word that (as in the phrases “it is best that,” and “it is essential that”).

The subjunctive mood can express conditions that are not true:

If I were queen for a day, I would eat cake for breakfast, lunch, and dinner.

It can express hypothetical situations:

If I were to design a dresser, it would be made of teak.

It can be used to express wishes:

I wish I were able to go on vacation with you.

It can express commands or demands:

The boss demanded that he complete the project or be fired.

It can express suggestions:

I suggest that she cut back on refined sugar to improve her health.