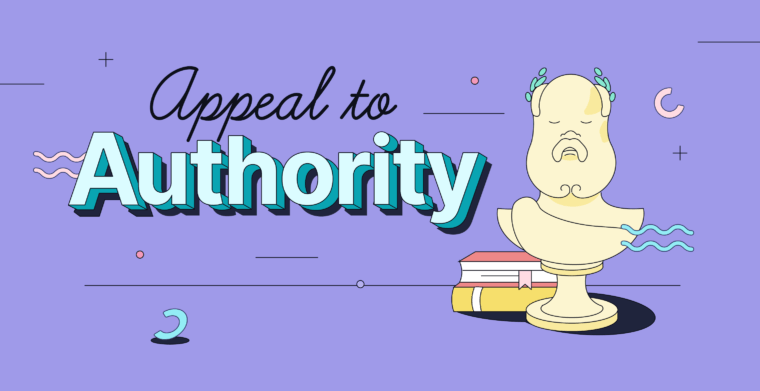 When you need to support a claim, it can be tempting to support it with a statement from an authority figure. But if done improperly, this could be a logical fallacy—the appeal to authority fallacy.

While experts are often the best people to reference for credible information, it’s possible to use an expert’s statement in a way that isn’t logically sound. There are a few ways to do this, and they’re all forms of the appeal to authority fallacy.

What is the appeal to authority fallacy?

The appeal to authority fallacy is the logical fallacy of saying a claim is true simply because an authority figure made it. This authority figure could be anyone: an instructor, a politician, a well-known academic, an author, or even an individual with experience related to the claim’s subject.

The statement itself may be true. A statement’s truthfulness has nothing to do with whether it’s fallacious or not. What makes the appeal to authority a logical fallacy is the lack of evidence provided to support the claim. It follows this format:

Individual, who is an expert in Y field, says X is true.

Just like the other “appeal to” fallacies, the appeal to authority fallacy is a fallacy of relevance. That means the claim the arguer makes to support their statement is irrelevant to the discussion and thus illogical. Other fallacies of relevance include the bandwagon fallacy and the red herring fallacy.

You might ask yourself, “How can an authority’s statement be irrelevant? Isn’t citing credible sources the basis of a logically sound argument?”

Take a look at this example:

“My adviser told me I’m a stronger candidate for grad school if I take advanced writing courses.”

Alone, it’s a declarative sentence. But look at it in a conversation.

Grad school admissions counselor: To get into grad school at our university, you need at least a 3.5 GPA.

Applicant: My adviser told me I’m a stronger candidate for grad school if I take advanced writing courses.

It might be a true statement, but in the context of this conversation, that doesn’t matter. The applicant’s adviser isn’t part of the grad school’s admissions office, and their statement about advanced writing courses doesn’t negate the counselor’s statement about the required GPA. This is what makes it an appeal to authority fallacy.

However, the statement can also be used in a non-fallacious way. Here is another exchange.

Student A: I really want to go to grad school, but I’m not sure how to stand out from the other applicants.

Student B: My adviser told me I’m a stronger candidate for grad school if I take advanced writing courses.

Notice how in this second example, the statement isn’t used as an argument or a rebuttal. It’s a declarative sentence that communicates a fact that could help Student A plan their course load.

What are the different types of the appeal to authority fallacy?

For example, you might claim that your older sister, who holds a master’s in literature, said it’s perfectly fine to use MLA format for your lab report. This is an appeal to false authority. Your sister might hold an advanced degree, but as a literature student, it’s likely she never or rarely used APA format. Therefore, she’s not an expert on the kind of formatting that’s required in science courses.

Another name for the appeal to false authority fallacy is an appeal to unqualified authority.

An appeal to anonymous authority is an appeal to authority that doesn’t attribute the claim to any specific person. Rather, the arguer attributes it to an unnamed individual or, more commonly, group of individuals. Here are a few examples:

As seen in the last example, an appeal to anonymous authority can be attributed to a group as vague as “they.”

As we mentioned earlier, there are some instances where supporting a claim with an expert’s insight is logically sound. For an appeal to authority to be legitimate, the authority must be qualified to speak on the subject being discussed, and their statement must be directly relevant to that subject.

For example, you might reduce your sugar intake and tell your friends you chose to do this because your doctor told you it would improve your health. In this case, your doctor is qualified to give you medical and lifestyle advice, so there’s nothing illogical about telling your friends that this is why you began eating less sugar.

However, if you were to write a research paper on why excessive sugar consumption is harmful to humans’ health, it would be fallacious to cite your doctor’s advice as a source. If your doctor conducted peer-reviewed studies on sugar’s effects on human health, then citing those studies would be a different story. But your doctor’s personalized medical advice to you isn’t sufficient evidence to support the claims you make in your academic writing.

How to avoid using the appeal to authority fallacy

The key to avoiding the appeal to authority fallacy in your writing is to cite only credible facts and data. When you mention your source’s authors in your work, structure your references in a way that demonstrates that you’re citing their findings, rather than simply name-dropping them. Take a look at these two examples.

“Dr. Plano, an expert on modern European drama, said the lamp in Strindberg’s The Father represents the captain’s mental state.”

“Through her extensive research, Dr. Plano has explored the lamp featured prominently in Strindberg’s The Father and written about its role as a symbol of the captain’s mental state.”

“My mentor, who holds a PhD in philosophy, said philosophy is the most challenging academic discipline. That’s why I decided to study art history.”

“Scientists have proved that the only way to catch a cold is to be exposed to a cold virus.”

What is the appeal to authority fallacy?

The appeal to authority fallacy is the logical fallacy of claiming that because an expert said something is true then it must be true.

How does the appeal to authority fallacy work?

Typically, the appeal to authority fallacy follows this format:

Individual, who is an expert in Y field, says X is true.

What are the different kinds of appeal to authority fallacies?

Additionally, there are instances where citing an authority’s expertise to support a claim isn’t a logical fallacy. These are known as legitimate appeals to authority.