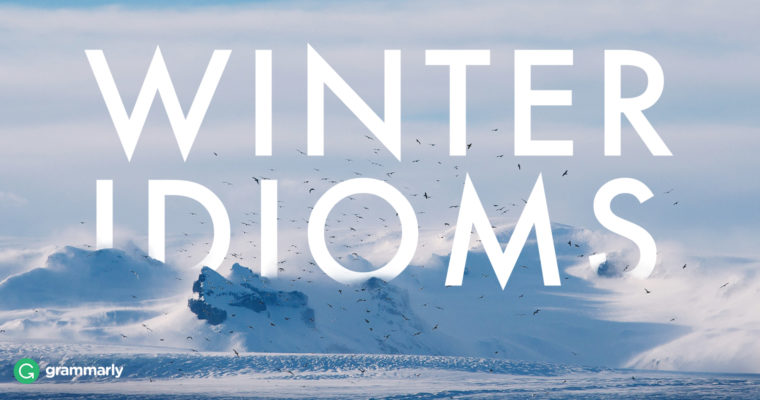 Feeling under the weather? Walking on thin ice with your vocabulary variety? These idioms will have a snowball effect on your language use this winter. And they’re just the tip of the iceberg.

If you’re going to tell someone to calm down, why not do it in rhyme? “Chill” means a feeling of coldness, as in, “there was a chill in the air.” Sometime in recent decades, probably the 1970s, the word also came to mean “relax”—just imagine a hippie flower child flashing a peace sign and saying “Chill out, dude.”

Eventually, “Take a chill pill” emerged. It might have shown up in the early days of ADD and ADHD medications like Ritalin, which were designed to calm hyperactive folks and therefore very logically dubbed “chill pills.” Other sources attribute the origin of the phrase to 1990s slang, specifically, Buffy the Vampire Slayer. If you’re stressed about the actual origin, we’ve got one thing to say: take a chill pill.

If Cher turns her back on Dion, Dion will see Cher’s shoulder. And the act shows dismissal or indifference to Dion, so it’s pretty unfriendly, or “cold.” Boom: an idiom is born.

Some unsavory sources claim that a custom back in Shakespearean times was to serve unwelcome guests a “cold shoulder of mutton”—i.e., not the tastiest meal, and a hard-to-miss sign of “would you be so kind as to get out. Now.” But etymologists are chilly on that origin, tending to favor reports that Scottish author Sir Walter Scott coined the phrase “cauld shouther” in 1816. With that literary proof, you can turn a cold shoulder on the meat story.

Let’s say you love turkey. You eat it all the time. Then, the doctor tells you it’s bad for you. You better stop eating it—right away. Really? You can’t just slowly ease off it, eating a little less turkey each day until you’re down to none? NO. No more turkey for you.

That’s called “going cold turkey”: abruptly stopping a habit that’s bad for you. People often use this term when they talk about ways to stop smoking or taking a drug, but you can also use it when you’re talking about diet or other habits. The phrase may come from addiction doctors in the 1970s, noting the “cold, clammy feel of the skin during withdrawal,” while its earlier uses (back to the 1800s) have to do with straightforward talk or a sudden occurrence.

(Note: Grammarly is not licensed to give medical opinions about turkey.)

Weather can be nice and sunny or cloudy and miserable. In the case of this idiom, the idea is the latter. If you’re under a raincloud, chances are you’re not going to feel 100% healthy, happy, and ready to party. So if you’re feeling sick, “under the weather” is a way to say so.

If you ever forget, just visualize getting followed around by a raincloud. That should remind you to feel sick. Etymologists believe that the first folks to say it were probably sailors in the 1800s. If you’re feeling sniffly, consider yourself lucky you’re not also on a ship at sea.

“In cold blood” means without mercy or emotion, suggesting that a cruel act was committed in a calculated, unfeeling way. It’s usually used pretty violently: “The victim was murdered in cold blood,” or “Darth Vader killed Obi-Wan in cold blood.”

Etymologists trace the idea to the 1700s or even 1500s. Medicine back then wasn’t exactly what it is now, so people thought that blood got hot in the heat of passion. Therefore, to do something dispassionately was to act “in cold blood.”

If you go on a diet cold turkey, you might feel like you did this to yourself in cold blood. It’s just that painful.

If something has a snowball effect, that means it might start out small, but keeps growing in importance. Just picture it: a snowball is rolling down a snowy hill, and as it rolls, it gathers more and more snow, getting bigger and bigger. Next thing you know, you’re running from an avalanche.

When hell freezes over

Most notions of hell are that it’s a pretty hot place to be. So the chances that it would freeze there? Pretty much zero. “When hell freezes over” is basically a way to say “never.” There are variations on the “freezing in hell” phrase, too. Here are examples of each: “I suppose you think you can go on living on [the Union] till hell freezes over.” —Guy Wetmore Carryl, The Lieutenant-Governor (the first-recorded use of the phrase was in this book in 1903) “My first writing teacher told me it would be a cold day in hell if I ever won a National Board of Review award.” –Terence Winter (writer of The Wolf of Wall Street) “I don’t think the president’s plan has a snowball’s chance in hell of succeeding.” —General James Conway

Again, this one gives a pretty clear mental picture: you go for a walk on a lake that’s iced over, but if the ice isn’t very thick, you might crack it and fall to a shivery doom. It’s a metaphor for being in a situation that might be dangerous or lead to negative consequences. If a kid is whining a lot and refusing to go to bed, her parents might tell her, “you’re on thin ice.” If an employee has been late to work every day for two weeks and is caught asleep at his desk, he’s probably walking on thin ice with his boss. Variations include “treading on thin ice,” “skating on thin ice,” or just “on thin ice.” The idiom’s first recorded use was in 1841: “In skating over thin ice our safety is in our speed.” —Ralph Waldo Emerson, Prudence

The tip of the iceberg