The Most Memorable Words and Sayings of 2021 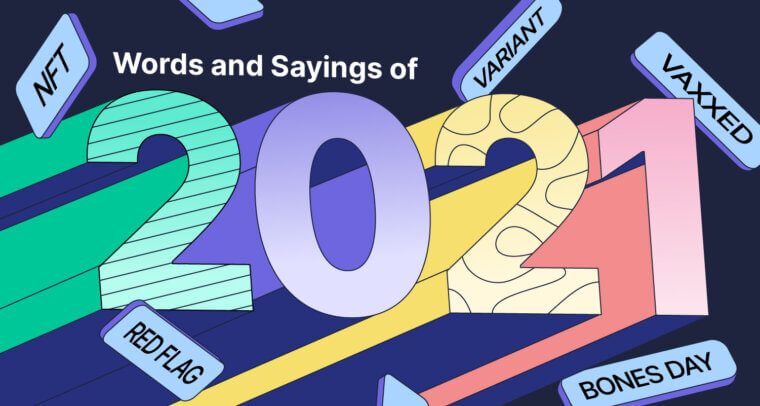 The language that trended in 2021 tells a story of the most consequential moments and phenomena of the year. If 2020 was “unprecedented,” then this year was its roller coaster of a follow-up. The rise of vaccines and variants caused fleeting and fluctuating moments of a return to some semblance of normalcy. People left jobs while organizations began returning to offices. With all the ups and downs, people embraced creativity, connection, and levity in new ways. Here are the words and sayings that have captured the state of the world and the cultural mood of 2021.

Year two of the pandemic

The Oxford Languages named “vax” its word of the year, and it’s not hard to understand why. As many countries around the world began rolling out COVID-19 vaccinations, the inflected form of the word, “vaxxed,” earned a spot as one of the most memorable words of 2021. The word, with the “-ed” suffix, describes a person who’s inoculated with a coronavirus vaccine. Businesses started requiring “fully vaccinated” people to show “proof of vaccination,” while “anti-vaxxer” sentiments spread. As the year winds down, some countries have kicked off vaccine “boosters,” making that a late-2021 trending term.

The word “variant” was made popular by the highly contagious, fast-spreading COVID-19 variant, “Delta.” It was first identified in India in December 2020 and exhibited a surge of breakthrough cases in the US by summer 2021.

The Delta variant threatened the relaxed social distancing guidelines that had started proliferating in some areas, which led to the “My fall plans/Delta” meme. The tongue-in-cheek meme presented a sardonic take on the change in fortune experienced by those who suddenly contracted a breakthrough case: A side-by-side image depicted “fall plans” as a fun, happy-go-lucky scene and the “Delta variant” as someone or something that foils the plan.

Example: “The Delta variant is more contagious than previous versions of the virus.”

After nearly two years of pandemic fatigue, 2021 surfaced a quintessential word for a feeling that many folks around the globe were experiencing: “languishing.” Describing a state of dispirited or apathetic disposition, languishing doesn’t necessarily feel “good” or “bad”; instead, it’s a lack of focus and restlessness that can’t be placed.

Although the term was first attributed to a state of mental health by sociologist Corey Keyes years before the pandemic, The New York Times pointed out how very much it acutely described the general mood of the year.

Example: “Jo says she’s languishing, and I get it—this year has been rough.”

Another major theme of 2021, thanks to the pandemic, has been the “future of work.” As vaccination rates led to regions loosening restrictions on in-person gatherings, many organizations pondered the return to in-person collaboration. Weighing safety precautions and employee flexibility, many businesses began implementing alternative, “hybrid work” models, wherein a portion of employees’ time is spent remotely while the rest of their time is onsite at an office. Grammarly itself is adopting a remote-first hybrid model.

Example: “The company’s hybrid work environment offers some interaction with coworkers but saves me from having to make a long daily commute.”

Another workplace shift that snowballed in 2021 has been “The Great Resignation.” The term describes the highest employee resignation rate in US history with 4.3 million workers leaving their jobs in August 2021, according to the US Bureau of Labor Statistics.

While workers consider their next professional chapters, many companies are hiring, with some offering competitive incentives to attract new talent—a notable shift from the COVID-related layoffs of 2020.

What might be the buzziest digital trend of the year, a non-fungible token (NFT) is a certificate of ownership that’s created on blockchain technology for non-reproducible digital collectibles, such as art, music, or games. Each NFT certificate has its own unique identifier (making it one of a kind), has an inherent value, cites ownership rights, and is easily transferable. The technology drew lots of attention this year as artists and musicians began selling them for sometimes wildly exorbitant amounts. Even corporate brands are tapping into the popularity of NFTs: The McDonald’s McRib NFT was given away in November 2021 to promote the sandwich’s 40th anniversary.

Example: “It’s interesting that the band’s new album art will be sold as an NFT.”

To millennials’ dismay, Gen Z-er Gaby Rasson created the word “cheugy” to describe a style or experience that was once on-trend but is now considered outdated and uninspired. It can also describe a person or situation that’s trying too hard.

The word, which went viral in early 2021 often targets millennials, though can be attributed to a person of any age. Although the word carries a slightly negative implication, adopters of the word, and even its creator, admit to being cheugy sometimes. For example, Rasson created and sold an NFT for the word, which is apparently an act that’s worthy of the slight.

Example: “Skinny jeans and side parts are so cheugy.”

Originating with user TikTok @.itsjon, “it’s the ____ for me” gained popularity in 2020. However, it took on new life in 2021 by going viral on both TikTok and Instagram with people commenting on certain aspects of others’ posts or videos with the phrase.

Subsequent hashtags, like #ItsForMe and #ItsForMeChallenge, evolved. People involved in the challenge took turns slinging insults—all in jest—about another participant. “It’s the ____ for me” suggests that the attribute or characteristic is what the speaker finds most detestable. Although the saying is meant in jest, the insults can be very severe.

Example: “It’s the snorting laughter for me.”

TikTok turned “understood the assignment,” a line from the song “I Understood the Assignment” by Tay Money, into a public affirmation that a person is on their A game. This saying can be in reference to someone’s wardrobe, actions, or other characteristics. They “aced” the (figurative) assignment, and making this statement indicates praise or approval.

Example: “Lee understood the assignment with that outfit.”

The concept of a “red flag” isn’t necessarily new, but using a deluge of red flag emojis on social media posts turned into a popular meme in fall 2021. It originated on Black Twitter where users would tweet dating-related scenarios and statements that they considered strong warning signs against the other person, followed by a barrage of red flag emojis.

Since it went viral, the “red flag” meme expanded beyond dating to apply to any type of relationship or interaction. For example, Grammarly posted a red flag meme about misspelled names.

“When they say they’re not a dog person.

The saying it’s a “bones day” / “no bones day” was created by TikTok user @jongraz about Noodle, his thirteen-year-old pug. In the video, he tests whether Noodle has “bones” (or energy) to get up from bed, or “no bones” (no energy) to get jazzed for the day ahead. The lighthearted—and frankly, adorable—TikTok video series got people to not only assess their pets’ bones levels for the day but also whether they, too, had bones or no bones.

Grammarly’s own ad campaign was spoofed on TikTok by user @aripine, who created a dance video choreographed to the ad’s audio. The video went viral, catapulting the phrase, “writing’s not that easy” into memedom, with the Grammarly team playing along with their own dance version.

TikTokers have since created cheeky videos of the ad audio with screenshotted text messages. In the videos, users ironically dub the “writing’s not that easy” audio as they refer to a text message about a supposedly challenging situation or a proclamation that they choose to ignore.

Example: “I’ve asked you so many times to put your dirty clothes in the hamper.” / “Writing’s not that easy.”

LifestyleA Pandemic Guide to Communicating About the Holidays with Family
Writing, grammar, and communication tips for your inbox.