Words for Peace Around the World 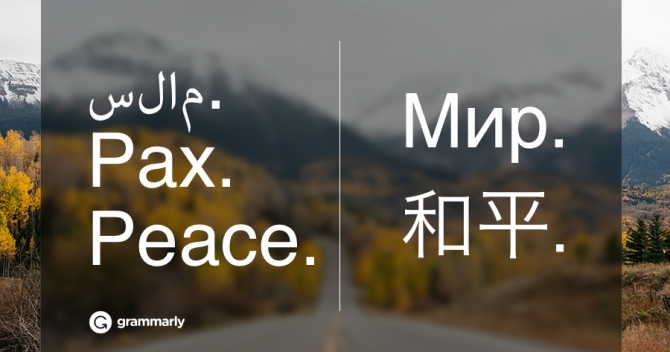 We invent words all the time: movie, jeggings, Internet . . . Did you know underwhelmed has only been around since the 1950s? Of course, we drop words just as often. When was the last time you met a cordwainer? But important words tend to stick around and influence other words in all kinds of interesting ways. Let’s take a look at one of these words, which also happens to be one we hear a lot this time of year: peace.

The words for peace in many Romance languages are direct descendants from the Latin word for peace, pax. Spanish has paz, Italian has pace, and French has paix. Paix is the modern form of the Old French word pais, which was the word that English borrowed almost a thousand years ago and transformed into peace.

Before that, the English word for peace was frith, a cognate of the modern German word for peace, Frieden. Although frith disappeared, its linguistic cousin, friend, is alive and well.

In the 1960s, Americans began to use peace, and eventually peace out, as a way of saying goodbye. The Hawaiian word for peace, aloha, is used as both a goodbye and a greeting. In Korean, the standard greeting anyoung haseyo translates literally to something like “Are you at peace?” The Arabic greeting salaam and the Hebrew greeting shalom both share a common root, sal, which means—you guessed it—peace. This same root is also an element in place names like Jerusalem and in personal names like Solomon. The Russian word for peace, mir, was the name of a space station and is an element in given names like Mirna and Vladimir.

“Peace on Earth” is a refrain we often encounter in speeches, songs, and of course, holiday cards. Depending on exactly where on Earth you happen to be, the phrase might sound completely different in the local tongue. But no matter where you are, words that mean peace are certainly worth saying.