All the Wondrous Ways We Express Wonder in English 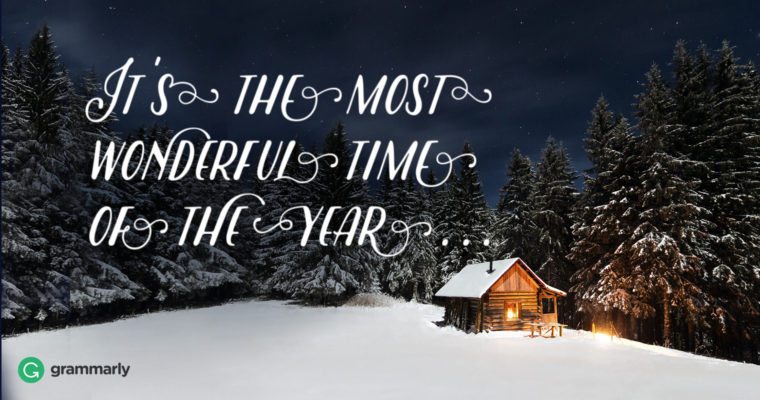 As we get nearer to the end of December, we are reminded of why it’s called the most wonderful time of the year. It’s the season of holidays, with Christmas, Kwanzaa, Hanukkah, and Mawlid usually celebrated within a month of one another. And then there’s the New Year, a great opportunity to commit ourselves to plans and resolutions we’ll never actually make good on. This time of year is a great opportunity to remind ourselves of some of the words we have at our disposal to express all the wonder that’s going on.

Let’s kick off with wondrous, an adjective we get from the word “wonder.” Something that creates a feeling of wonder can be called wondrous. It can also be called wonderful, but let’s stick with the rarer of the two. Also, note that there’s no e in wondrous—wonderous was once an alternative, albeit less common spelling of the word. But as with monstrous and ambidextrous, we use the spelling without an e because it’s much closer to the way we pronounce the word.

There’s more than one thing we could do with awe. There’s always awesome, but if you’re tired of hearing that word, you might use awful instead. It once meant “awe-inspiring,” even though it’s rarely, if ever, used that way anymore. If you don’t want to spend the holidays explaining to people that you’re not a Grinch but a fighter for grammatical lost causes, you can just say that something is awe-inspiring or that you are awe-filled.

Of course, the English language isn’t lacking in synonyms for awesome and its relatives. Marvelous is a very nice word (which you’ll want to spell with two l’s if you’re in the UK). You might also want to pronounce it “maah-velous!”—it makes the word sound even better. Astonishing is a word you’d use for something that causes amazement or wonder. And look, we almost forgot amazing.

If you want to say that something is so good it actually overwhelmed you with wonder, you can call it astounding. Although, if something really astounds you, you can say that it flabbergasted you or even dumbfounded you. It might have even stupefied you—but be careful when using these words because some of them might also carry negative connotations.

If you want to stray from the path of overly formal words, there’s no better place to start than supercalifragilisticexpialidocious. The word means “exceptionally good,” and when was the last time someone wished you a supercalifragilisticexpialidocious New Year? From there, you can head onto fantabulous. It’s is a mix of “fantastic” and “fabulous,” and when you encounter something that can only be described with the combined powers of those two words, you know it’s full of wonder. If you’re in the UK and you want to compliment something but you don’t want to say it’s wonderful, you might say it’s dench, or well dench if you want to take it up a notch. Of course, there’s no need to point out that people sometimes use words like “sick,” “ill,” or “wicked” to describe something that’s good. But why would they, when fantabulous is around? Really makes you wonder.