What Is Humblebragging, and How Can You Avoid It in Your Writing? 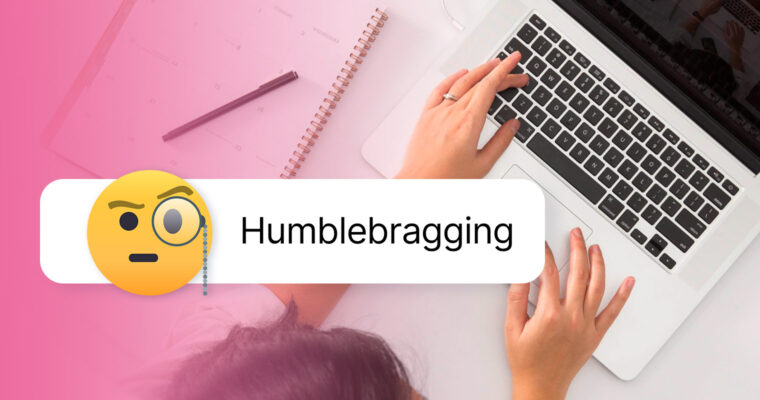 Your friend complains about how swamped she is in her new director role. She’s so stressed, in fact, that she’s lost 10 pounds and can even fit into her old jeans from high school.

As the listener, you translate your friend’s series of “complaints” and deduce the real meaning behind the brag—she’s proud of her new position and knows she looks better than ever.

This is the art of the humblebrag.

Strike the right tone, every time.
Grammarly can help.

A “humblebrag” connects the words “humbly” + “brag,” which implies the act of indirectly or demurely boasting. The definition of a humblebrag by Merriam Webster is:

“To make a seemingly modest, self-critical, or casual statement or reference that is meant to draw attention to one’s admirable or impressive qualities or achievements.”

Interestingly, the humblebrag has only recently entered our social lexicon, thanks to the rise of social media—some credit the term to the late Parks and Recreation producer Harris Wittels.

From celebrities to athletes, it’s common for people to engage in humblebragging without even realizing it. This is because talking about ourselves triggers the same pleasure response in our brains as sex or food, two Harvard neuroscientists found.

For instance, you may have come across a novelist saying something like, “I can’t believe my new book is on the New York Times bestseller list!” This statement, while true and maybe even well-intentioned, still comes off as braggadocious. In this case, the novelist’s attempt at humility was unfortunately expressed as a humblebrag.

Another typical way that humblebragging is expressed is alongside a complaint. Saying “I have to miss happy hour to pick up my Mercedes from the detailer after work” may seem like an annoyance to the speaker, but to anyone listening, this is nothing but a classic humblebrag. If it’s not necessary to mention your fancy car in conversation, then you probably shouldn’t.

The truth is that people see straight through the humblebrag. And even though outrightly bragging is frowned upon, researchers found that people actually prefer it to the strategic, sneaky humblebrag. Beyond that, there are ways to talk about yourself—and build yourself up—without making others feel inferior.

So how can you avoid the double-dealing humblebrag in your writing and everyday conversation? Here are some tips.

How to avoid humblebragging

When it comes to online writing—sending emails, posting blogs, or sharing your thoughts on social media—it’s impossible to know how people are really reacting to your words. Your words merely float in cyberspace without any context or visual cues to neutralize what you’re saying.

This is why it’s so easy for humblebrags to slip into your writing. It’s normal to want to share good news and feel valued, but there is a way to go about it without being a humblebraggart.

As you write, be aware of the proportion of the hardships you’re expressing to the amount of bragging that’s included and use careful discretion. There’s nothing wrong with sharing positive news, but be judicious about the tone of your boast, and whether or not the complaint you’re expressing is relatable. You want to come off as appreciative, not self-absorbed and out of touch.

Humblebragging: Wow, the plaque they give out for Employee of the Month is so big! It won’t even fit on my desk.

Sharing your accomplishments: I’m so thankful to have been acknowledged this month!

If you’re writing an advice column about growing house plants, you don’t need to talk about all 30 of your succulents that are thriving in your perfectly sunlit kitchen. People want actionable instruction—not self-indulgent narratives. In other words, don’t throw your achievements in other people’s faces. Be sensitive, know what your audience is dealing with, and approach your subject with tact and sincerity instead.

Humblebragging: When you have an incredible home garden like mine, it’s hard to remember what it was like to care for your first philodendron.

Using your knowledge to help: Rome wasn’t built in a day—and neither was my home garden. But with a little patience and a lot of care, you can have your own flourishing greenery.

People relate to writing that’s genuine. They will respond to writing that includes your hopes, disappointments, and everything in between. Don’t be too filtered in your writing, as this will come across as fake or unrealistic. If you’re going to brag, just be honest about it. You can let your news speak for itself, instead of qualifying it and making your message seem duplicitous.

Honest: I’m so proud our team won—we worked really hard for this, and it paid off.

Tip #4: Use Grammarly’s tone detector to check yourself

Grammarly’s tone detector is the filter you need to ensure you’re skewing more humble than bragging. It looks at your word choices and calls out how your writing might be perceived by your audience. Among the other tones it checks for, our tone detector will flag when your writing comes off as egocentric and will offer suggestions for using a more modest voice.

Remember: no one likes a humblebragger. In our world, we value being authentic and honest above anything else, so it’s essential that your writing is as genuine and heartfelt as possible. When in doubt, check your tone again—you might be humblebragging.