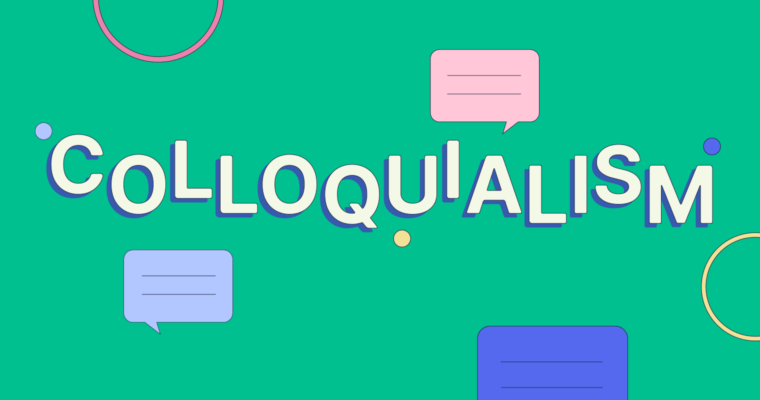 Some say “soccer,” others say “football.” They’re talking about the same sport, but what they call it is a matter of colloquialism. Colloquialism is everyday language used by people of a certain region. In the UK, you might leave your “flat” to go to the “football” game, while in the US, you’d leave your “apartment” to go to the “soccer” game.

Using colloquial language makes writing less formal and more approachable—less “presenting to the class,” more “chatting in the hall.” It can also be used as a literary device to make character dialogue sound more authentic.

Colloquial vs. colloquialism: What’s the difference?

When is colloquialism used?

Colloquial language shows up in your conversations with family and neighbors. It’s the phrases in your journal and in texts to your friends. Basically, it’s the language that you use when you’re not thinking about what language to use.

Formal language: It pleases me.

Colloquial language (from the New England region of the US): It’s wicked good.

Keep in mind that when language is colloquial, it might not be recognized by an automated grammar checker like Grammarly. Grammarly is still a great way to clean up mistakes and ensure your writing is clear, but if you are purposely writing in a more colloquial style, then it’s good practice to double-check your words manually to ensure it’ll be understood. This can be as simple as reading the piece out loud to yourself. Your ear will almost always catch disparities between the way you talk and the way you write.

But it’s not just about being informal. For it to be colloquialism, it must be informal and specific to a region or country. That’s why knowing the colloquialisms of a region can help you write more believable dialogue between characters. Colloquialisms as a literary device help create setting and provide authenticity of voice.

Are colloquialisms the same thing as slang or jargon?

The short answer is: No. Slang is a linguistically innovative way of speaking—it’s fresh. Similar to colloquialisms, slang does not have to be taken literally. However, slang trends toward being more playful than colloquialisms. The most distinguishing characteristic of slang is who uses it. Slang is used within a certain demographic, which may be bound by age, race, or culture. Colloquialisms are used within a certain region, regardless of age, race, or culture.

Another related term is jargon. Jargon is common language within an occupation, industry, or activity. Phrases like “leverage,” “level set,” and “circle back” are common in business jargon. If you understand what it means to “take one for the team,” then you are at the intersection of business and sports jargon. Anyone who’s worked in a restaurant knows the difference between “BOH” and “FOH” and instinctively spins around when they hear “order up!” All of these phrases are specific to that industry and would therefore be considered jargon—not colloquialisms.

Slang can make your writing more casual, and jargon can make it more specific to a group. To determine whether your writing is full of slang, jargon, or colloquialisms, figure out who uses the words. Would your teenage cousin use it but not your grandmother? It’s probably slang. Would your coworker understand but not your little sister? It’s probably jargon. Does everyone around you, geographically, understand it? Then you’re writing colloquially.

American English, Australian English, British English, Canadian English: It’s all English. But just because two countries speak the same language does not mean that their words mean the same things. Every English-speaking country has its own English colloquialisms.

For example, a “boot” in British English can mean the trunk of a car, whereas in American English it solely means a type of shoe (did you catch that pun?). “Chips” in Australia are “fries” in America. And Americans can thank The Great British Baking Show for broadening our understanding of “biscuits.”

Examples of English colloquialisms and their definitions

Ain’t — Same as isn’t, originally used in the American South

Ballpark — Something that is close but not exact

What’s the John Dory? — What’s going on; what’s the gossip?

Bloody — Very, but in a slightly profane way

Rubbish — Trash, or an exclamation meaning something is the same quality as trash

Whinge — To whine and complain

Double-double — A coffee with double cream and double sugar

Examples of colloquialism in literature

As you can tell, colloquialisms add a regional flavor to your writing. Check out these examples of colloquialism in literature, and try to pick out how the style contributes to the setting.

“What’s the use you learning to do right when it’s troublesome to do right and ain’t no trouble to do wrong, and the wages is just the same?” — Adventures of Huckleberry Finn, Mark Twain (American colloquialism)

How does colloquialism work?

Colloquialism is developed by speakers in a certain region. In writing, colloquialism works by using common terms and phrases to create a sense of authenticity and informality and can enhance dialogue.