How to Turn Your New Year’s Resolutions Into Habits 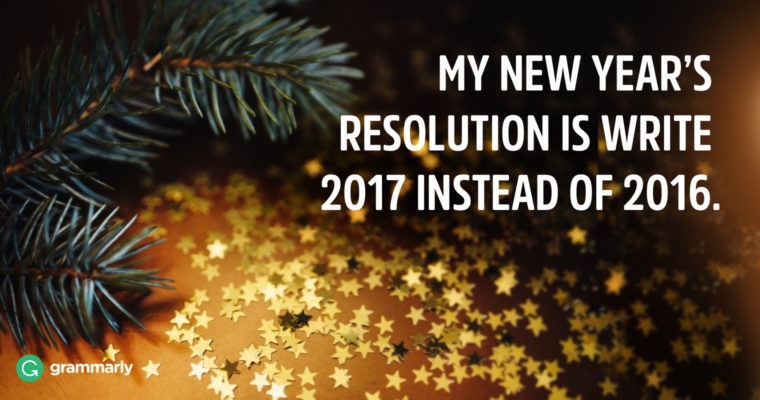 So you’ve decided to write more. That’s your goal, your resolution.

You’re there; the keyboard is there. Maybe in your head you’re repeating “you can do it, you can do it,” getting pumped for the outpouring of productivity, the astronomical wordcount that will no doubt ensue at any moment now.

Yep, at any second, we’re going to kick into high gear and—Hang on, let’s put on some coffee first. And while that’s warming up, we might as well start a load of laundry. Oops, we’ll get back to the keyboard in one second, and we’ll really rip into this writing thing as soon as—Actually, I just got some email, I should check this…

Getting into the discipline of writing isn’t easy. Even people who do it for a living sometimes dread it, and often procrastinate. But if writing is what calls to you, we’ve put together some thoughts on how to cement it as a new habit.

If you want to be a writer, you must do two things above all others; read a lot and write a lot. There’s no way around these two things that I’m aware of, no shortcut.

Stephen King, the author of On Writing as well as dozens of novels, urges writers to constantly have a book on hand. (He’s also far from the only wordsmith to lay into the distraction of television. The late David Foster Wallace counselled writers not to mistake watching shows for observing actual humans in the wild: “The dots are coming out of our furniture, all we’re spying on is our own furniture,” Wallace wrote.)

In the smartphone era, doing away with all manner of distraction in order to lug around a three-pound book may sound like unwieldy, curmudgeonly advice. The key here is knowing it’s easier to replace an existing habit with a new one than to erase an old habit altogether.

For instance, you might wonder when you’re supposed to have the time to read more, while also hemorrhaging precious hours over the course of each week perusing mundane social media. But if you want to take King’s advice, your phone doesn’t have to be an enemy; thanks to a variety of apps, it can be a library, both for reading and for listening to audiobooks. So rather than looking at your old classmates’ depressing vacation photos, you can open a book on your phone and begin enriching yourself as a reader.

And reading, King continues, can inform how you write, even if what you’re reading this week happens to be dreck:

I don’t read in order to study the craft; I read because I like to read. It’s what I do at night, kicked back in my blue chair. Similarly, I don’t read fiction to study the art of fiction, but simply because I like stories. Yet there is a learning process going on. Every book you pick up has its own lesson or lessons, and quite often the bad books have more to teach than the good ones.

In other words, while you may want to write brilliantly, you’re under no obligation to choose strictly brilliant books to read.

If you were to take up running for the first time (as Haruki Murakami did when he first became a novelist), you probably wouldn’t expect to finish a marathon your first day, or even in your first month.

The work of writing is similar. It’s easy to forget, when you’re reading neatly assembled words on a page or a screen, that a human sat somewhere and labored to organize each thought. Writer Harlan Ellison used to remind people of this fact by demonstrating it in public; he would sit in bookstore windows and mash out page after page. “By doing it in public, I show people it’s a job,” he said, “like being a plumber or an electrician.”

Some people set out a goal of drafting their entire book in one month, but it’s a tall ask. King’s goal for himself is about two thousand words daily, including holidays; he suggests neophytes start by aiming for a thousand daily, six days a week.

Specifically, he recommends you find a room with a door on it, close that door, and stay there until you hit your goal. But in an era when people publish novels composed entirely via mobile phone and articles drafted using speech recognition while walking around New York, you’re not necessarily confined to King’s strict regimen of solitude and dad-rock. (The dude loves AC/DC.)

Indeed, no matter how you write or who you are, “writing is hard for every last one of us” as author Cheryl Strayed noted in her seminal pep talk on the subject, continuing: “Coal mining is harder. Do you think miners stand around all day talking about how hard it is to mine for coal? They do not. They simply dig.”

I know it’s hard to write, darling. But it’s harder not to. The only way you’ll find out if you ‘have it in you’ is to get to work and see if you do.

If this all sounds daunting, take heart; journalist Ta-Nehisi Coates has called the very task of writing “an act of physical courage.”

Much of writing can be a battle with an inner editor—a voice reading each word as you write it, declaring “no, that’s not good enough. Rework this. Strike all of that. Do it better.” Managing to shut this voice up is no small feat, but doing so is crucial, explains Anne Lamott, author of Bird by Bird: Some Instructions on Writing and Life, among others.

Calling perfectionism “the voice of the oppressor,” she argues that perfect can be the enemy of the good, or perhaps the hey-at-least-it’s-finally-done first draft, continuing:

Perfectionism is a mean, frozen form of idealism, while messes are the artist’s true friend. What people somehow (inadvertently, I’m sure) forgot to mention when we were children was that we need to make messes in order to find out who we are and why we are here—and, by extension, what we’re supposed to be writing.

Lamott also warns that while writing is essential, “publication is not all that it is cracked up to be,” suggesting it’s perhaps better to see your new writing goal as its own reward than as a career path. On this point, she is echoed by King:

If I don’t write every day, the characters begin to stale off in my mind—they begin to seem like characters instead of real people. The tale’s narrative cutting edge starts to rust and I begin to lose my hold on the story’s plot and pace. Worst of all, the excitement of spinning something new begins to fade. The work starts to feel like work, and for most writers that is the smooch of death. Writing is at its best—always, always, always—when it is a kind of inspired play for the writer.

As you cement your writing goals into habits, don’t forget to have fun. We believe in your victory.