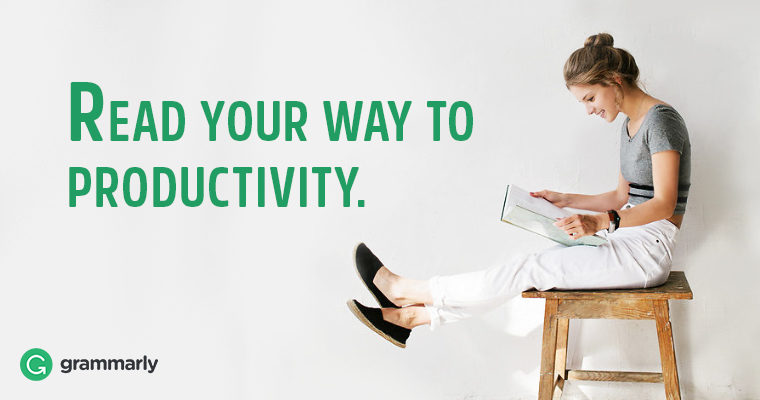 As a company striving to make people more productive and successful, we know a thing or two about the importance of having the right tools when there’s a job to be done. But even though Grammarly will help speed up your proofreading, you also need to know how to manage your time if you want to be more productive. That means prioritizing and fighting the urge to procrastinate. Our product can’t teach you those skills, but we can recommend some books that might help.

How good does a productivity book have to be to catch the eye of a US president and prompt him to ask the writer to help implement its principles at the White House? Pretty darn good! During his presidency, Bill Clinton once invited Stephen R. Covey to help him and his staff learn to implement the principles in the book. The Seven Habits of Highly Effective People has become one of the best-known personal effectiveness books for good reason. You don’t need to have a developed set of skills to adopt the seven habits mentioned in the title. You need to have certain principles, such as fairness and honesty, and use them to build the habits that will help you transition from being dependent to being independent, and from being independent into being interdependent. According to Covey, that’s where real effectiveness lies.

Flow: The Psychology of Optimal Experience by Mihaly Csikszentmihalyi

Do you know that feeling when you’re extremely focused on a task and everything around you sort of fades away, and you’re doing great work and feeling good about it? That feeling we like to call “being in the zone?” Well, that’s something Mihaly Csikszentmihalyi, a major figure in positive psychology, calls optimal experience or flow. In the book Flow, Csikszentmihalyi sets out to explain what flow is, how it works, and what the requirements of getting into it are. While it’s relatively easy to see how mastering the state of flow can make you more productive because it has an emotional component to it, being in the flow can also make you feel happier while your productivity is up. Can you think of a better reason for reading a book?

Eat that Frog! by Brian Tracy

If you’re not very keen on the idea of eating frogs, don’t worry—Brian Tracy’s book Eat that Frog! won’t make you do it. But there is a saying about how eating a frog early in the morning makes everything bad that might happen to you during the day not as bad. The point here is to tackle the biggest, baddest and most off-putting tasks first. That’s one of strategies Tracy offers to help procrastinators get things done. There are twenty more of these methods described in the book, and all of them are very practical and just waiting for you to implement.

Getting Things Done: The Art of Stress-Free Productivity by David Allen

David Allen is a person you should listen to when it comes to productivity. His book Getting Things Done was first published in 2001. In 2015, he revised it to incorporate modern tech advancements. It has become more than just a book of advice—it’s a productivity method, known by the acronym GTD. Allen’s bestseller is a mix of guidance and principles based on the central premise that the more relaxed you are, the more productive you will be. So, if you want to tie your productivity to being relaxed, GTD will teach you to do it. It will give you all the tools necessary. But bear in mind, GTD has a reputation for being complicated to understand and implement, so dive in only if you think you can handle it.

Lifehacker: The Guide to Working Smarter, Faster, and Better by Adam Pash and Gina Trapani

So far, the books on this list have offered universal principles—getting into the flow, tackling procrastination, and developing a productivity mindset. It only makes sense to end the list with a book that will help you be more productive in the digital environment : Adam Pash and Gina Trapani’s “Lifehacker: The Guide to Working Smarter, Faster, and Better.” The book is a compilation of blog posts featured on Lifehacker.com, a website dedicated to software and personal productivity. If you’re not tech-savvy and you want to know what’s out there to help you with your productivity issues, this book will show you. But it will also help you rein in all that tech when it starts taking up too much of your time.