Why Do We Say ’Tis the Season?

Karen Hertzberg
Updated on May 13, 2019Lifestyle 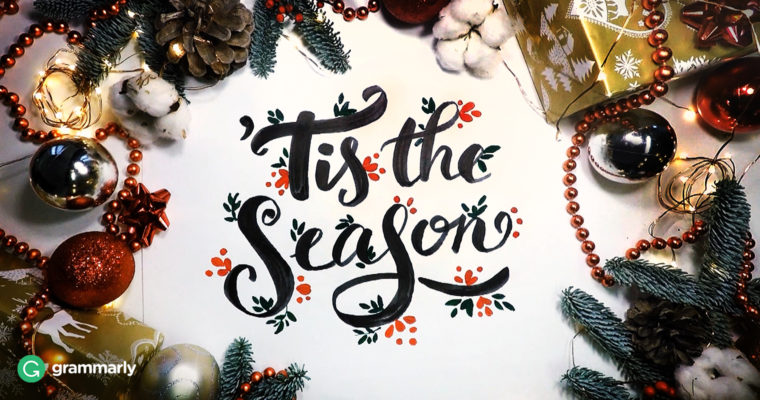 If you’ve seen the classic holiday movie, National Lampoon’s Christmas Vacation, then you’ll probably remember this scene. Family man Clark Griswold stands at the lingerie counter of a large department store chatting up the pretty sales girl. After bumbling through the conversation and making a fool of himself, he smiles and says, “‘Tis the season to be merry!”

But where did ’tis the season, a phrase we use during the festive build-up to the end-of-year holidays, originate?

The history of ’tis the season

’Tis the season evokes the quaint, archaic language we associate with holiday stories like A Christmas Carol. Although Ebenezer Scrooge suggested that anyone who went around wishing others a Merry Christmas should be “boiled with his own pudding, and buried with a stake of holly through his heart” (geez, dude—chill!), he may not have had an opinion of ’tis the season. It’s possible the phrase first appeared in a song written around 1862, nineteen years after A Christmas Carol was published.

’Tis the season is most often recognized in the lyrics to the classic holiday song, Deck the Halls. Go ahead and sing along with us!

Deck the halls with boughs of holly

‘Tis the season to be jolly

Whenever you carol about donning your gay apparel, you’re singing lyrics written by Scottish musician Thomas Oliphant. They’re sung to the tune of a Welsh winter folk song called Nos Galan. Believe it or not, the Nos Galan (which means “New Year’s eve” in eighteenth century Welsh) was a competitive New Year’s Eve drinking song.

Where does the word ’tis come from?

‘Tis (pronounced tiz) is a contraction of it is, similar to it’s. The word is much older than Oliphant’s holiday song, however. Its origins probably date back to the 1500s.

Here’s a tip: Because
’tis is a contraction, it requires an apostrophe. Make sure your word processor doesn’t automatically add a single left quotation mark instead!

‘Tis is also known as a proclitic, which is a word that’s closely connected in pronunciation with the word that follows it. When we don’t take time to enunciate the two separate words it and is, we get a word like ’tis that just sort of rolls off the tongue. Proclitics work especially well when singing an up-tempo song or when cutting a syllable to fit a poem’s meter.

According to Google Ngram, ’tis first appeared in writing in the early 1600s but peaked in popularity a hundred years later in the early 1700s. You’ll find the word in everything from the works of Shakespeare to Monty Python.

If you’d love to revive colorful (if archaic) contractions such as ’tis, you might consider adding ’twas to your vocabulary. That’s a contraction of it was. It’s also the first word of the popular poem A Visit From St. Nicholas. You know, the one that starts with “’Twas the night before Christmas.”