How to Navigate Political Talk at Work 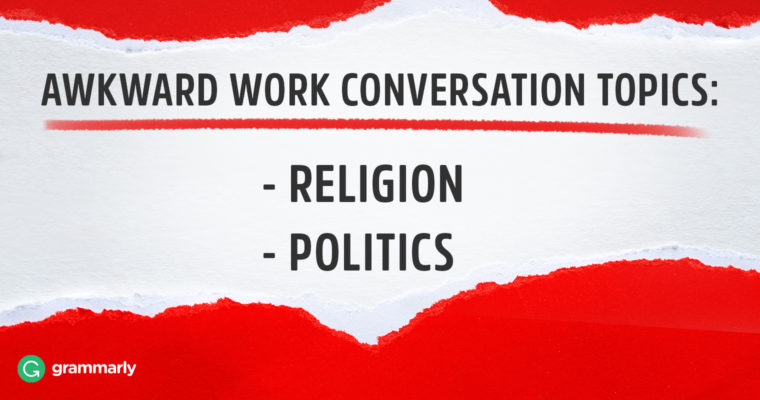 You’re at your desk, writing an email and minding your own business, when you overhear your officemates chatting nearby. They’re casually discussing climate change, a topic you’re passionate about. You could weigh in and drop some serious knowledge on them, but if you do, you’re likely to be engaged in a debate. Should you resist the urge or jump into the fray? It’s a tricky question. After all, there’s a reason religion and politics have long been considered taboo in polite conversation.

The social dynamics of sensitive issues

Few subjects rival politics in the Things that Make Us Twitch department. Political topics are polarizing. Powerful cultural phenomena cause us to hold fast to our positions, which can make political debates emotionally charged. For example:

The do’s and don’ts of talking politics at work

The social dynamics that affect our opinions on these issues make navigating the turbulent waters of political talk at work a challenge. Avoiding conflicts requires a little self-control and a lot of finesse. Here are a few do’s and don’ts.

Whatever strong opinions you hold, it’s possible your colleagues have equally strong opinions that may or may not match your own. According to the American Psychological Association, one in four younger workers (ages 18-34) report feeling stressed or unproductive as a result of political talk in the office. The APA also discovered that more than half (54 percent) of American workers actively avoid discussing politics at work. Twenty percent admitted to avoiding coworkers because of their political views. So, before you spout off about foreign policy, consider whether you’re about to make a domestic faux pas by bringing up topics that make your coworkers uncomfortable.

Don’t let your guard down on social media

There’s a reason you often see phrasing like “opinions are my own and don’t reflect the views of [company]” on Twitter profiles—social media is a public soap box, and the people you work with may well be paying attention when you take to that stage.

According to a New York Times report, “For private employees, who account for about 85 percent of the work force, the First Amendment’s guarantee offers no protection from being fired for something you’ve said, either in the workplace or outside of it, as on social media.” It’s important to not only know your company’s policies about social media, but to understand your workplace culture. If your colleagues aren’t spouting political views on Facebook, for example, you might want to play it safe when it comes to sharing your own political views on a social platform, or at least limit the audience you share them with.

Do engage others with respect

There are gentler ways of engaging in political discourse. According to research from the Harvard Business Review, actors who used four simple skills when talking about heated topics were significantly more likely to be seen as diplomatic, likeable, and knowledgeable. (Conversely, people labeled the actors as “abrasive” and even “ignorant” when they neglected to employ these skills.) Those who successfully engage in political talk focus on learning (“I’m curious about why we see things so differently. Would you share your position with me?”), ask for permission (“Would it be okay if I told you more about my perspective on this issue?”), show respect (“I don’t assume I’m right. I value your insight on this.”), and focus on common ground (“Let’s figure out the goals we have in common and work from there.”)

In other words, don’t challenge people to look at things from your point of view, challenge yourself to see things from theirs. If you must talk politics at work, practicing these skills will help you maintain better relationships with your coworkers.

Discussions about things like foreign trade or taxes generally don’t push buttons, but if you decide to dig into issues like reproductive rights or same-sex marriage, you’re treading on dangerous territory. There are some political topics that have no place in office conversation. Ever.

How do you know if a topic is too hot to handle? Consider whether it’s connected with moral or religious beliefs. These issues are so deep-seated and personal that they almost always arouse strong emotions.

Do know when to walk away

Regardless of whether you were the one to broach the topic or the topic came to you, it’s okay to walk away from a political discussion. If you feel your hackles rising, step back before you become pushy, defensive, or argumentative. Be polite, firm, and direct. Take personal responsibility for backing off rather than suggesting the other person is upsetting you. You might say: “I’m not comfortable discussing this. Can we just agree that we see things differently?” If that’s not quite your style, deflect with a little non-political humor: “Hey, let’s talk about what’s really important today. Are there any bagels left in the breakroom?”