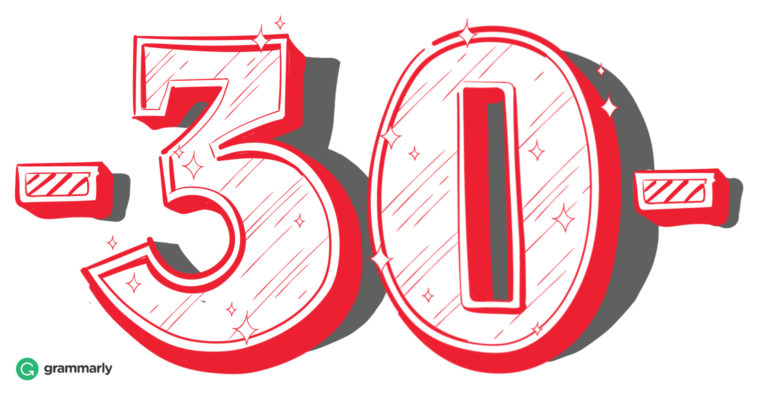 If a publisher offers you a kill fee, don’t panic! They’re not asking you to murder anyone. A kill fee is money paid for a piece of writing if they decide to kill it—i.e., not publish it. If you want to make it in the writing industry (and avoid criminal charges), you need to learn the lingo. Let’s start right now.

Have you heard of a policeman’s beat? It’s the area he regularly patrols. For reporters, a beat might refer to a physical location or a topic that they often cover. To illustrate, Jody Reporter might specialize in politics while John Reporter covers health care. When a politician does something notable, the newspaper will automatically assign Jody to cover the story because her beat is politics.

Jody will investigate and submit her copy to the editor. Copy is the content of a news article. Now, that makes it clear what copy editors do! They read the material, point out errors, and suggest improvements to increase clarity, readability, and accuracy.

What happens if new information becomes available after Jody’s article appears in the newspaper? The journal might invite her to write a follow-up. Follow-ups present the news from a different angle, clarify facts, or reveal new developments in the original story.

In Jody and John’s busy press office, who has time to say a whole phrase when deadlines loom? Try to guess the full terms expressed by these abbreviations: on spec, graf, and ezine.

What if John hasn’t received any requests from publishers recently? He might take the initiative and submit a story on spec—without a contract in place. He’s taking a chance, hoping that the publishers will accept his piece. “Spec” derives from speculation. A writer speculates, based on the type of publication and what it has published in the past, that a certain piece will work well for them. If all goes to plan for John, the publishers will like his work and offer him a fair price.

A graf is a paragraph. Did you guess correctly?

Ezine stands for “electronic magazine.” Ezines may publish exclusively online, or they may also have a print edition.

Writing Expressions You Already Use

Have journalistic phrases snuck into your vocabulary without you realizing it? For example, angles aren’t just for geometry class. An angle is the perspective of a story. To illustrate, Jody might write a news article reporting the statement released by Miami’s mayor about the recent hurricane. John’s angle would cover the situation at the local hospitals as they attempt to treat people hurt during the evacuation of the city. Several reporters might pursue different angles of the same topic.

Another term you may already use in everyday speech is “kicker”. Have you said “Here’s the kicker. . .” as you added a surprising detail to a personal account? In the world of journalism, a kicker is a small headline that accompanies the main headline. Usually, it appears on the left side of the title in a different font to set it apart from the rest of the text.

When copy editors talk in acronyms, you can easily get lost. Acronyms are a type of abbreviation formed by the first letters or components of a word, syllable, or phrase. Some common writing acronyms are nib, EOD, COB, and AP style.

Nib stands for “news in brief.” Newspapers use the term when, instead of a full-length article, they publish a short paragraph covering a topic. To see an example, visit the DW website to view “top stories in three minutes.”

EOD is short for “end of day.” Some employers use EOD to refer to the end of the 24-hour day (i.e., midnight). However, most jobs mean the end of the workday. A second acronym, COB (close of business) reflects this idea more accurately than EOD. Therefore, if the publication office closes at 6 pm, Jody would need to deliver her work before that time. (For courtesy’s sake, she may want to turn in work fifty to thirty minutes before closing.) Remote workers usually use the timezone of their employers.

AP Style is a term you are likely to encounter once you get your first writing job. No, it’s not related to the Gangnam Style made famous by the South Korean recording artist PSY. AP stands for Associated Press, which, according to Thought Co., is the world’s oldest news service. The service sets the standard for writing—from how to punctuate to what words to capitalize—for newspapers and digital publications. They publish the rules in the AP Stylebook. If you don’t write according to current AP guidelines, your work will stick out like a sore thumb!

Start your journalism career on the right foot. You’ll sound like a real copy editor if you learn these industry-specific terms.