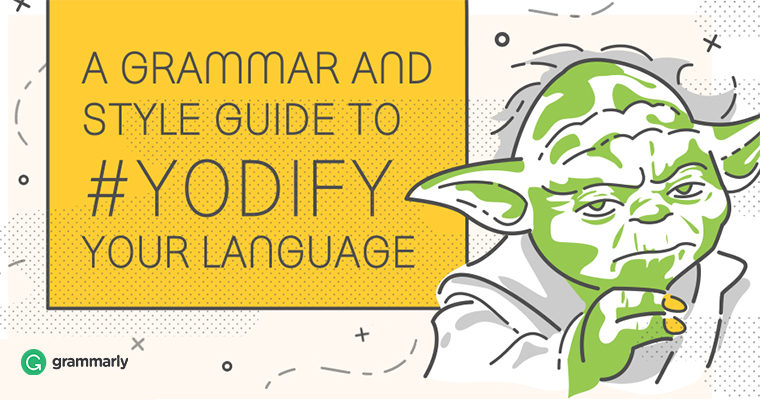 With the arrival of the anniversary of the initial release of the first Star Wars movie, we at Grammarly started to reflect on what makes the films so great. Being language lovers and word nerds at heart, we are particularly fascinated and charmed by the grammar of the great Jedi master, Yoda. To celebrate our love of Star Wars, we dissected a few classic Yoda-style quotes in order to better understand the patterns that #yodify the English language.

To share this infographic with your readers, embed it in your blog post by pasting the following HTML snippet into your web editor:

A Grammar and Style Guide to #Yodify Your Language

“Powerful you have become. The dark side I sense in you.”

In Yoda-speak, modifiers (adjectives, adverbs, and modifying clauses) as well as objects often come before rather than after the subject and verb in a sentence. But the sentence doesn’t become completely scrambled:

“If into the security recordings you go, only pain will you find.”

Note that “if” is still placed at the very beginning of the sentence, as it would be in proper English.

“Ready are you? What know you of ready? For eight hundred years have I trained Jedi. My own counsel will I keep on who is to be trained.”

In most cases, Yoda gets the subject-verb order right for English—subject then verb. Sometimes, however, he switches the order of verbs and subjects. This tells us that the placement of subjects and verbs in Yoda’s native language is much more fluid than in English.

MISSING AUXILIARY IN NEGATION and LACK OF CONTRACTIONS

“Size matters not. Look at me. Judge me by my size, do you? Hmm? Hmm. And well you should not.”

When Yoda wants to negate a verb he does something peculiar—he omits the helping verb “to do” and instead places “not” after the verb. “Size does not matter” becomes “Size matters not.” Curiously, Yoda’s phrasing is perfectly standard English when the main verb is “to do,” as in “Do or do not. There is no try.” In fact, one can say that Yoda learned the correct way to negate “to do” and “to be” (e.g. “I am not”) and applies that construction consistently to all verbs.

Additionally, English teachers and lovers of formal writing should be proud that—despite his other mistakes—at least Yoda never used a contraction. Every “don’t” or “won’t” or “shouldn’t” for Yoda was a do not, will not, or a should not.

“Ready are you? What know you of ready?”

Many ESL learners struggle with the added “do” in English questions. As with his removal of “do” in most negations, Yoda often drops the “do” in questions; he forms questions with the interrogative pronoun, followed by the subject and verb (occasionally inverted). “Where do you go?” becomes “Where go you?” and “Why do you say that?” becomes “Why that you say?” For other tenses, the auxiliary “do” remains, but often the word order is inverted.

If to #Yodify something you want, follow these main rules you must:

1. Move your modifiers, modifier phrases, and objects in front of your subject-verb phrase.

3. Drop the auxiliary “do” when negating most verbs and place the negation after the verb.

4. Do not use contractions.

5. Drop the auxiliary “do” in present tense questions.

Check out some of our favorite quotes in literature, #Yodified:

“Across the sky a screaming comes.” (Thomas Pynchon, Gravity’s Rainbow)

“A bright and cold day in April it was, and the clocks thirteen were striking.” (George Orwell, 1984)

“You know not about me, without a book by the name of Adventures of Tom Sawyer you have read; but no matter it is.” (Mark Twain, Adventures of Huckleberry Finn)

“The saddest story have I heard, this is.” (Ford Madox Ford, The Good Soldier)

“The moment English one learns, set in complications do.” (Felipe Alfau, Chromos)

What are your favorite literary quotes, #Yodified? Share in the comments!