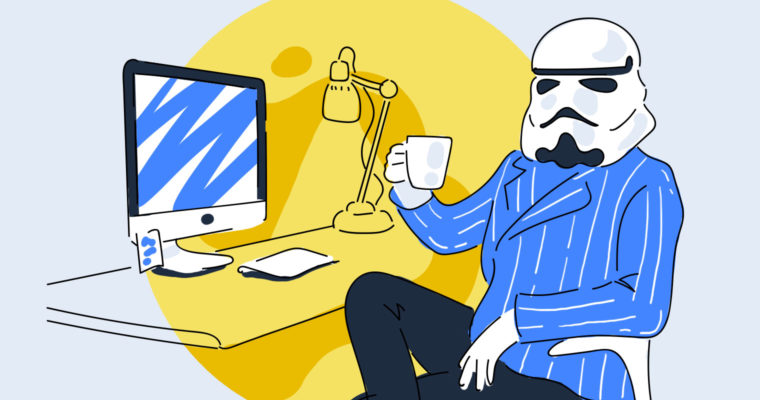 Star Wars Day is a unique gift to both Star Wars fans and wordplay fans, giving us the opportunity to wish friend and foe alike, “May the Fourth be with you.”

Even if you live here on Earth and not in a galaxy far, far away, there are ways to make sure that the Force is strong with you this May the Fourth. Maybe you incorporate subtle references into your day at the office or change your speech habits. Maybe you throw a #StarWarsDay into a tweet or Instagram post. And there are always (fake) lightsaber battles.

To get you on your way, here are thirty-one ways to get the Force flowing through you this #StarWarsDay.

1 Show up to work as Darth Vader.

Or, if you’re not the boss and don’t want to appear insubordinate, a stormtrooper. Those bucketheads fit right in in the workplace. 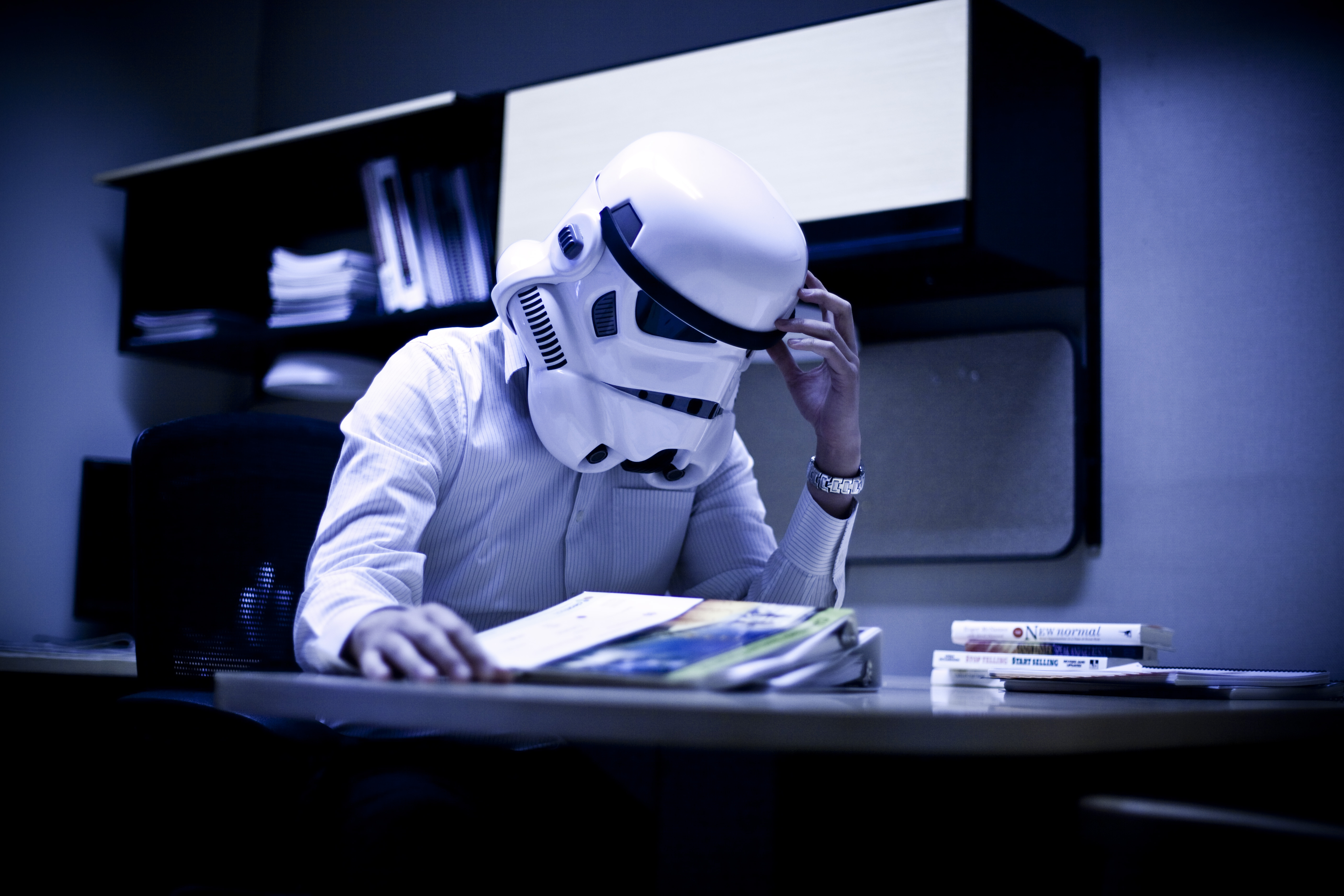 3 Insert a random, irreverent gif into a work email.

It may not be from a Bantha, but Jedi like you need their calcium.

If you’re ready for commitment, you can even buy an ice cube tray with that scoundrel’s outline already built in. Just don’t let Boba Fett get to him first.

There’s the Hoth Toddy, the Qui-Gon Jinn and Tonic, the Dark and Stormy Trooper, and more.

7 Listen to John Williams’ score to boost your mood.

Need a bigger boost? Listen to Figrin D’an and the Modal Nodes play the Cantina song on loop for ten hours. Repeat as needed.

8 Try to work some Star Wars languages into your vocabulary.

Check out some of the cosplay creations from the Star Wars Celebration last year. You never know—Salacious Crumb just might be a major help in the office.

What have you learned from #StarWars? https://t.co/SoyeWrz1S4

10 Bring in some themed treats.

11 Work “I have a bad feeling about this” into casual conversation.

12 Ride a tauntaun to work.

Snow lizards not native to your habitat? No problem. Take a broomstick, an alpaca mask, and some ram horns, stick them all together, and you’ve got your transport. Just remember: they smell bad on the outside, but the inside is worse.

13 Use some Star Wars disses.

If someone gets on your bad side, diss them good with one of these classic Star Wars insults:

If you want to get out of doing something, say “But I was going to Tosche Station to pick up some power converters!”

15 Refer to anyone subordinate to you as “Padawan,” and call your superiors “Master,” “Lord,” or (preferably) “Grand Moff.”

If you call your boss “Emperor,” just prepare for the repercussions.

16 Set the Imperial March as your ringtone.

17 Have a laser sword fight.

You can have a lightsaber battle with any number of everyday objects. For example:

Star Wars is all about making connections with people (or aliens), learning how to forge your own path, and occasionally lifting rocks with your mind while you’re upside down. If you’re picking a mentee, make sure you do a quick midichlorian count first.

What does it mean to write the future?

Feeling unproductive? Blame it on having a bad motivator.

(If you’re in the workplace, make sure you get consent first).

21 Start (or continue) your countdown to Solo: a Star Wars Story or Star Wars: Episode IX.

22 Change your email auto-signature to MTFBWY.

Working on a tough project at work? Let Yoda inspire you: “Do, or do not. There is no try.”

24 May the Fourth not enough for you? In some circles, tomorrow is known as Revenge of the Fifth.

It’s an opportunity to join the dark side and celebrate all the Sith Lords doing their best to exploit the power of the Force for their own gain. Just don’t be seduced by the dark side. Once you start down the dark path, forever will it dominate your destiny. Plus, May 6 is just a normal day.

Star Wars Day may happen only once a year, but remember: the Fourth will be with you. Always.