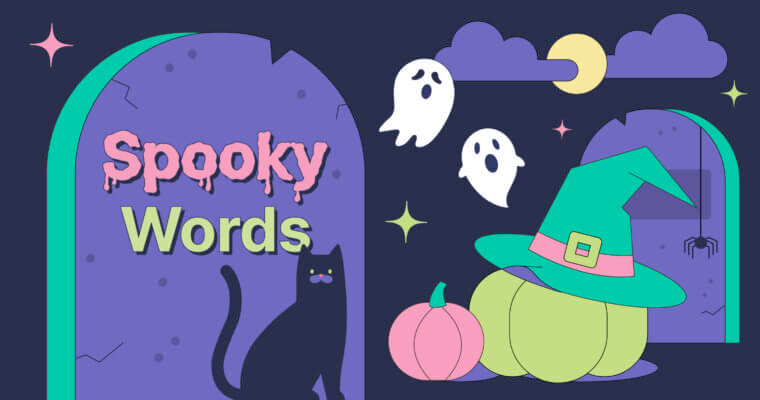 Practicing thoughtful word choice in your writing lets you clearly express your meaning to the reader, and it helps set a vivid mood and tone. If you’re writing a creepy scene in a poem, short story, or longer work, you can conjure the scene just right by using evocative language. Inspired by Halloween, we’ve compiled a list of thirteen spooky words that’ll make your reader’s hair stand on edge.

The adjective “ghastly” evokes a horrifying or terrifying sentiment about the noun it’s describing. It’s reminiscent of the word “ghost” as if the subject is taking on a death-like pallor.

“‘Though thy crest be shorn and shaven, thou,’ I said, ‘art sure no craven,

Ghastly grim and ancient Raven wandering from the Nightly shore —

Tell me what thy lordly name is on the Night’s Plutonian shore!’

The word “ghoulish” describes grotesque or perverse characteristics that are frightening to the beholder. It’s also a form of “ghoul,” a word derived from Arabic that means demonic being.

“Despite my ghoulish reputation, I really have the heart of a small boy. I keep it in a jar on my desk.” —Robert Bloch, author of Psycho

Nothing screams Halloween like the word “macabre,” which was derived from an Old French phrase that alludes to the “dance of death.” Today, macabre acutely describes death in a grisly and gory fashion.

She turned the corner of the house and flinched as the smell of decaying flesh, rotten yet cold as iron, struck her nostrils. A few feet ahead, her eyes met the macabre playground of the day’s crime scene.

“Phantasm” conjures a haunting image of an unnatural apparition. Emerging from the supernatural, a phantasm might be seen so faintly, so momentarily, that its beholder questions the reality of the surrounding world.

“But some of us awake in the night with strange phantasms of enchanted hills and gardens, of fountains that sing in the sun, of golden cliffs overhanging murmuring seas, of plains that stretch down to sleeping cities of bronze and stone, and of shadowy companies of heroes that ride caparisoned white horses along the edges of thick forests; and then we know that we have looked back through the ivory gates into that world of wonder which was ours before we were wise and unhappy.” ―Howard Phillips Lovecraft

Alluding to the human anatomy in your writing conjures sensations of fear. The adjective “spine-tingling” can refer to a chilling, heart-thumping type of fright, but can also describe thrilling suspense about an unknown situation.

As Mr. Pettigood stood frozen gazing at the ransom letter, a spine-tingling draft billowed through the drawing room, as if bringing his awareness back from the clouds.

The word “blood-curdling” arouses terror and fear from the senses. It comes from the medieval idea that an excessive amount of fear can turn the blood cold and therefore curdle it.

“There’s nothing like a blood-curdling hymn to make you feel at home, thought Jean Louise.” —Harper Lee, Go Set a Watchman

Descriptive words for sounds add layers to an already spooky writing project. “Creaky” objects, like wooden floorboards in disrepair or a rusty swing, almost cry out in warning to the reader.

“If I didn’t look around it would not be true that somebody had opened the gate with the creaky hinges, and that is a wonderful principle for a man to get hold of… What you don’t know don’t hurt you, for it ain’t real.” —Robert Penn Warren, All the King’s Men: Restored Edition

The word “howl” evokes a melancholy, pained cry. It’s made by an animal, but attributing a howl to a subject that’s not an animal sets an especially eerie mood.

“And now, my poor old woman, why are you crying so bitterly? It is autumn. The leaves are falling from the trees like burning tears―the wind howls. Why must you mimic them?” ―Mervyn Peake, Titus Groan

>>Read More: 10 Ways to Write About Nature That Aren’t Cliché

Describing a noun as “shadowy” makes it mysterious, dark, and difficult to see. And when it’s hard to discern nearby spooky figures, your imagination races to the creepiest possibilities.

Just beyond the threshold, a shadowy graveyard emerged. The fog drifted between the headstones, as if threatening to stir the peace below the earth.

When a subject is “lurking,” it suggests someone who poses a sinister threat and is purposefully biding their time for an opportune moment to attack.

“What’s behind the door or lurking at the top of the stairs is never as frightening as the door or the staircase itself.” —Stephen King, Danse Macabre

Lead your readers underground with images of a “crypt”—a vault that’s used as a burial area, commonly underneath a church. Crypts elicit an unsettling and foreboding mood that’s perfect for a frightening tale.

“The last condescended from Academy spires Pretended at life with a cold, dead heart Face like a crypt, from a family of liars Quietly, quietly played . . . her . . . part. —Children’s nursery rhyme” ― K.D. Castner, Daughters of Ruin

The word “cackle” is often described as a witch’s laugh. The sound is harsh, shrill, and menacing. It can be used to evoke a sense of scorn or unpleasantness that’s to come.

The hooded figure let out a cackle, then calmly brought a finger toward its cracked, blue lips.

This adjective is used to refer to something that makes someone feel anxious or uneasy. The combination of the prefix “dis-” and the root word “quiet” in and of itself implies the opposite of calm; the word is used in the context of a disturbing or fearful situation, ratcheting up a sense of dread.

“A disquieting loneliness came into my life, but it induced no hunger for friends of longer acquaintance.” ―Truman Capote

These are just a few words to create an ominous and creepy mood in your writing that’s sure to make your audience sleep with the lights on at night.