How Many Spaces Go After a Period, One or Two? 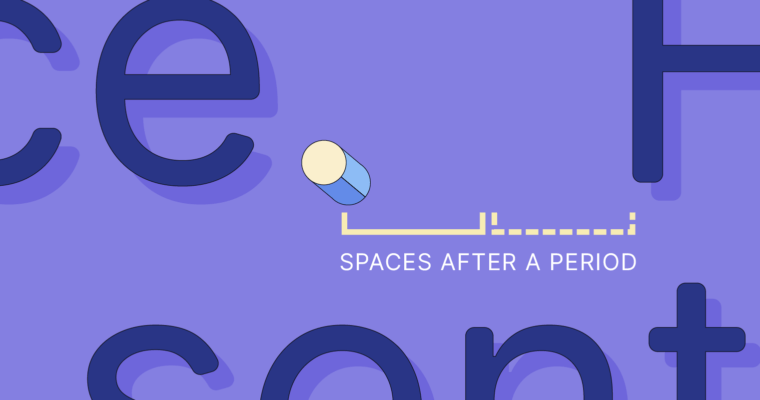 When it comes to formal writing, there are so many rules for punctuation and formatting that it’s hard to remember all of them. One of the rules that trips people up is whether to use one or two spaces between sentences.

Years ago, people learned how to type on a typewriter, which gave every character the same amount of space on a page. This meant the letter i, for example, was given the same amount of space as the letter w, even though it took up less space. What evolved from this practice—called monospaced typesetting—was the use of two spaces between sentences so that new sentences would stand out in the uneven text.

But these days computer programs use proportionally spaced fonts, so it’s time to get rid of double spacing between sentences. Not only do most people deem this formatting habit a mistake, but it may make your formatting appear outdated.

Let’s explore the history of one versus two spaces between sentences so that you can always be clear about your punctuation.

How many spaces come after a period?

It is generally agreed that having only one space after a period or punctuation mark is correct.

While some may believe that either way is right, Microsoft formally settled the space debate in 2020 and sided with everyone who thinks one space is correct, not two. The creator of Microsoft Word updated the software so that two spaces between sentences would be considered an error.

These days most contemporary style guides also recommend using a single space between sentences, including:

(In years past, APA recommended using two spaces after end-of-sentence punctuation, but it updated this suggestion to using one space in 2019.)

The MLA guide, a major academic style guide, instructs students to follow whatever practice their teacher suggests, though MLA’s guidebook uses just one space in its examples.

One space vs. two spaces

Deciding between one space or two spaces after a punctuation mark is simple:

The choice really comes down to the expectations of the person who will be grading or reviewing your writing.

If your editor prefers two spaces in between sentences for added clarity, then that’s how you should format your novel. If your reviewer hasn’t given you any particular guidelines, single spacing is your best bet.

Spaces after a period examples

Here are a few examples in proportionally spaced font to show you how one versus two spaces between sentences looks on a page:

I told my friend that I wanted to go to England in the spring. She said she would rather visit Italy.

Giselle loves to hike in the summer. Arturo likes to ski in the winter.

Many students love the author Zora Neale Hurston.  I wish we’d read her books in school.

A shark swam into the bay.  Nobody was allowed to go in the water for the rest of the day.

Spaces after a period FAQs

How many spaces come after a period?

According to every major style guide in both academic and business writing, one space is recommended after a period or other punctuation mark at the end of a sentence.

Where did the one-space vs. two-spaces rule come from?

The origin of using two spaces between sentences was on typewriters. Double spacing made it easier to see the beginning of new sentences when writing with typewriters. But this practice is no longer needed on computers, which automatically use proportionally spaced fonts.

When should I use one space or two spaces after a period?

Use one space after a period for all types of writing, as this is the accepted standard. Use two spaces after a period if your instructor has told you to do so, or as a matter of personal choice.