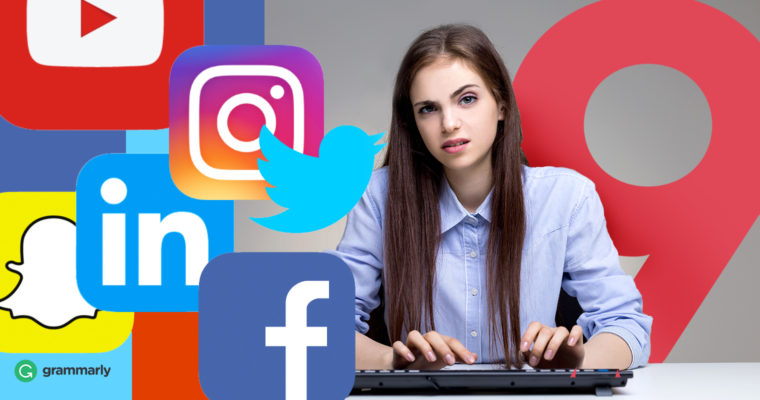 To share or not to share? That’s the twenty-first-century Hamlet’s dilemma. With good reason: if you post those pictures of the weekend’s booze cruise, will a potential employer pass you over?

Here’s the answer: set the privacy on those pics to friends-only. More and more employers are scoping candidates on social media, so the image you present could affect your prospects. To maintain a professional profile while job hunting, make sure you avoid these nine dangerous don’ts on social media.

Make sure you represent your best self on any social network. On LinkedIn, that means crafting a professional persona. On Facebook, Snapchat, Instagram, and Twitter, even if you’re mainly interacting with friends, don’t forget that posts may still be public.

According to a CareerBuilder.com survey, 60 percent of employers research job candidates on social media, and over half are reluctant to hire candidates with no online presence. They’re mainly looking for professionalism, whether you’re a fit for the company, and proof of your qualifications. If your social media profiles show you in that light, you’re golden.

Whether to hide those college party photos or just to force yourself to focus, it’s tempting to shut down your networks when you’re on the job hunt.

But here’s a hint: don’t. Instead, follow or “like” companies you’re interested in to get updates on open positions and other developments. Join conversations, answer questions, and provide useful links. And join LinkedIn’s Groups to get to know people in your industry. These things are called “networks” for a reason.

For good measure, here are some tips for working that network like a pro.

No one’s going to hire someone whose résumé says they’re a “contsientious wroker.” (It’s conscientious, folks. Yeah, it’s a toughie).

Especially on LinkedIn, common writing mistakes can damage your professional image. But even on the more social social networks, you can demonstrate that you’re a conscientious worker by taking time to proofread. Yes, even for cat videos. Getting your grammar right can be the fine line between “goofy cat lover” and “weirdo who doesn’t pay attention to human conventions.”

4 Having a Split Personality

Your LinkedIn persona is going to be a bit stiffer than your Facebook persona, and your llama-dedicated Instagram might be separate from your tech-focused Twitter. It’s fine to differentiate—as long you don’t look like a totally different person on your different networks.

That also includes what you name yourself on social media. If your AIM username was glitterprincess79 back in the day, it might be time for an update. A few rules of thumb in picking social media handles: keep it simple, don’t necessarily define yourself by your job, and be wary of puns.

If your LinkedIn says “three years in finance” but your Facebook feed’s got a picture of you in a Starbucks uniform from last year, that’s a pretty big red flag. Lying about your experience or qualifications is never a good idea, especially with the Internet there to give evidence one way or another. Tell the truth on your résumé, and make sure your networks reflect that truth, too.

There are typos, and then there’s just bad writing. That can mean lack of clarity, wordiness, or a mish-mash of styles. On Facebook you want to be casual and simple but still make sense, while on LinkedIn you want a higher dose of formality.

Not specific enough? Check out our articles on ways to be a conscientious social media user and profile tips for LinkedIn.

7 Complaints About Your Current Job

If you want to let off steam about how your boss doesn’t give you enough credit, that dumb task you have to do, or the lame office snacks, social networks are not the place to do it.

Just in case, be careful posting about your job in general. What you say about your coworkers or projects could be interpreted as you having a bad attitude or being uncommitted, or might just rub a potential future employer the wrong way.

8 Being a Bad Person

Even folks who mainly post puppies and inspirational quotes can slip sometimes. Complaining can make you look bad, and comments that can be construed as discriminatory are even worse. Most companies have policies against discrimination based on race, gender, religion, sexuality, and more. If you break that policy before you even apply, chances are you won’t get an interview.

A professional version of yourself can still be yourself. Being careful what you post isn’t the same as deleting every shred of your personality.

After all, you have to interact with the people you work with, and they want to know that you’re fun, smart, and easy to talk to, as well as a conscientious worker.