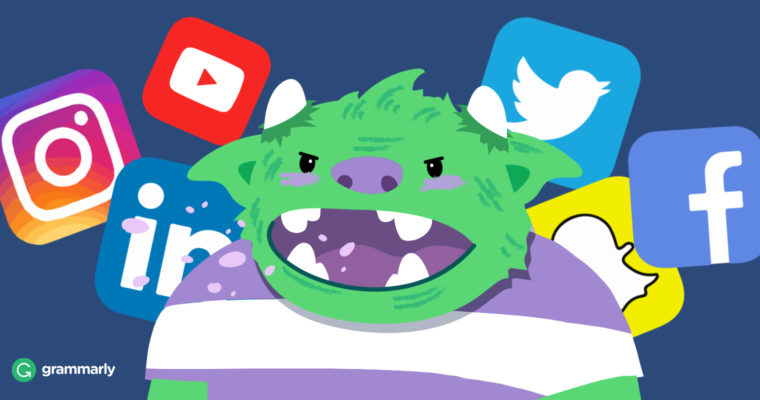 You’ve just poured your heart into your latest blog post. You got real! You got vulnerable!

…And now a total stranger is publicly ridiculing you.

Life on the Internet can be stressful. As you express your experiences and opinions, you are bound to run into the naysayers, the haters, and the outright trolls.

Dealing with these characters may not be fun, but they don’t have to ruin your day. Here are seven smart ways to handle negativity on social media and come out on top.

The simplest and most direct way to destroy trolls’ power? Ignore their hateful comments and refuse to engage with their negativity.

Trolls feed on attention. Your frustration and anger are their goal. When you indignantly reply to an ugly comment, you’re giving them exactly what they want.

Your anger at injustice and desire to prove your point will tempt you to argue with them, but remember: trolls aren’t interested in productive dialogue. They will twist your words, accuse you, and make non-factual statements—they will not concede.

It doesn’t matter how intelligently you present your point, the argument will only devolve further, resulting in a colossal waste of time and emotional energy. But when you deprive a troll of attention, they’ll soon slink away to sow discord somewhere else.

Instead of engaging directly with the troll (giving them the power and attention they want), respond with a positive comment for your friend. Let your friend know how much you enjoyed their post and that you appreciate her sharing it.

Your support will mean a lot to your friend and will encourage others to speak up, unleashing an avalanche of positive support to drown out the negativity.

Whenever possible, do your part to foster a supportive online community where people feel safe to have real dialogue, listen, ask questions, and express their points respectfully.

Trolls frequently spout misinformation, propping up their arguments with factually inaccurate assertions. This can confuse other readers and make a troll’s argument sound credible to those who don’t know the truth.

If you see a troll making inaccurate statements, on your own social media post or someone else’s, share some primary sources that refute their arguments and back up the facts.

You are doing this to educate other readers, so don’t respond to the troll directly (shouting matches will ensue). Instead, leave a comment such as “Hey folks, there seems to be some confusion around [issue].” Then calmly state the facts and your sources.

4 Respond With Humor or Kindness

Trolls only have as much power as you allow them to have. You can disarm their attack by showing them just how little you take their hateful words seriously.

Respond to them with a witty retort or thank them for their comment.

Well, the fumes from the DVDs might be toxic and I’ve still got your money, so by all means borrow my lighter. pic.twitter.com/kVoi8VGEoK

Just remember, keep things clever and focus on deflecting their words—don’t sink to their level of ugliness or engage in personal attacks.

If someone is making you uncomfortable or even threatening you on social media, don’t hesitate to report them. Facebook, Twitter, Instagram, and other major sites all allow you to file complaints about abusive behavior. Many platforms also have a “block” or “ignore” feature you can use to stop receiving the bully’s harassment.

If you personally moderate an online community, such as a Facebook group or message board, consider creating a “rules of conduct” post. If someone behaves inappropriately, you’ll have a clear justification for booting them and defense against any claims that they’re being singled out.

Sometimes the people who argue with us on the Internet aren’t vicious strangers—they’re friends and family. If you and your uncle are duking it out on a Facebook thread, maybe take a moment to pause and consider how much you value the relationship.

If this is a person you don’t agree with, but you still want to have an amicable relationship with, consider sending them a private message or ask if they’re open to a phone call to work things out.

In the public theater of the Internet, it can be difficult to admit “I was wrong” or “You really hurt me.” Continuing the conversation via private channels can help facilitate a peaceful solution.

Dealing with negativity can be exhausting and discouraging, so remember to take care of yourself. If a rude comment really got to you, call a trusted friend to vent and get perspective.

Remember, no matter how “personal” a comment may seem—such as someone on Instagram criticizing your weight—those hateful words are coming from their insecurities and baggage. You don’t have to let their issues ruin your day.

Be secure in your value, focus on the positives, and let the negatives fade into the background.