Joanna Cutrara
Updated on
May 26, 2017Writing 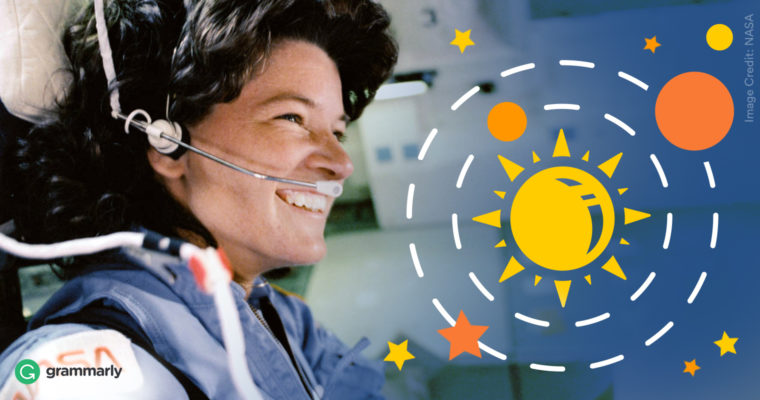 Did you know May 26 is Sally Ride day?

Sally Ride was an astronaut, physicist, and science educator—and she shattered one of the highest glass ceilings to become the first American woman in space.

Throughout her life she inspired millions and defied gender stereotypes at every turn.

Sally was born in Los Angeles in 1951 and grew up loving science and sports. Her parents encouraged her and her sister to explore, be curious, and pursue their interests even if they were outside the norm. According to Sally’s mom:

[Her father] and I simply forgot to tell them that there were things they couldn’t do. But I think if it had occurred to us to tell them, we would have refrained.

In high school and college, Sally pursued her love of tennis and became a serious player, competing in tournaments at the national level. Tennis legend Billie Jean King encouraged her to drop out of college and pursue a professional career—advice she fortunately did not take.

She stuck with science, in part because of her experience attending an all-girls high school:

It was probably very important to my future. I didn’t have a lot of confidence in myself. I did well in math in high school, but I didn’t know if I would be able to do well at math in college. At Westlake, it was all girls in the trigonometry, calculus and chemistry classes. That environment gave me the confidence and motivation to declare a physics major in college.

Sally double-majored in physics and English at Stanford, and was a few months away from completing her PhD in physics when she saw an ad in the student newspaper—NASA was looking for astronauts. The moment she saw it, she knew that’s what she wanted to do. Sally ripped the ad from the newspaper and applied that afternoon.

Here’s a tip: Sally’s parents and peers encouraged her to pursue her dreams, regardless of cultural norms. But many of us haven’t had that same encouragement. Maybe you grew up with society or even friends and family telling you there are things you can’t do because of who you are.

Take a moment to consider: Are there negative messages or limitations you’ve internalized? Are there interests, projects, or careers you wish you could pursue but feel are off-limits?

Sally applied to NASA’s astronaut program—along with 8,000 other applicants—and was one of thirty-five selected. For the first time in history, NASA had opened its program to women, and Sally was one of the first six women to join.

In 1978 she began her astronaut training at the Johnson Space Center in Houston and quickly fell in love with flying. She worked as a communications officer for mission control for the Columbia STS-2 and STS-3 shuttle flights, and she put her skills as a scientist to work developing a robotic arm for the shuttle to deploy and receive satellites.

Finally, in 1983 she got her chance to fly. She was selected for the crew of the Challenger STS-7 mission and was about to become the first American woman in space.

Sally’s sole focus and passion was on doing her job—she never set out to make history—but her inclusion in the Challenger crew set off a media frenzy. While she experienced the respect and acceptance of her male colleagues at NASA, the media took it upon themselves to bombard her with sexist questions during every interview.

Her NASA training prepared her for space flight—not the pressure of international celebrity. Fortunately a key character quality of astronauts is composure. Sally handled the spotlight with grace and remained unrattled despite the media circus.

The Challenger STS-7 mission was a success, and millions of women and girls around the world were inspired by Sally’s historic achievement.

Here’s a tip: When Sally saw the recruitment ad she didn’t disqualify herself—she just went for it. And she went on to become the first American woman in space. One of the hallmarks of her life was that she lived fearlessly, refusing to let anything hold her back from pursuing her dreams.

Sometimes when our dreams feel big or unattainable, we psych ourselves out of even trying. What might be possible in your life if you chose to take action despite fear?

Sally took her second space flight in 1984 and was scheduled for a third mission when the Challenger disaster happened in 1986. The tragic deaths of seven NASA colleagues deeply affected Sally. She served on the Rogers Commission, which investigated the disaster, and was personally instrumental in uncovering the cause of the rocket’s explosion—the design flaw in the O-rings.

In 1987, Sally left NASA and went on to became a physics professor at UC San Diego. She knew that the women’s movement had paved the way for her opportunities, and she became a passionate advocate for improving science education and inspiring the next generation of women in STEM.

I never went into physics or the astronaut corps to become a role model. But after my first flight, it became clear to me that I was one. And I began to understand the importance of that to people. Young girls need to see role models in whatever careers they may choose, just so they can picture themselves doing those jobs someday. You can’t be what you can’t see.

She created the NASA EarthKAM project, an educational outreach program that allows middle school students to take images of the Earth from space. With her partner, Tam O’Shaughnessy, she cowrote seven science books for children. And in 2001 she cofounded Sally Ride Science with the mission to encourage young girls and minorities to stick with STEM throughout school.

Here’s a tip: Sally knew that we don’t live in a bubble—our success comes from supporting each other. We need others to pull us up and in turn we need to help those who come after us, too.

Do you feel like you could use some support? Maybe it’s time to seek out mentors or organizations who can help you along your journey.

What are you doing to help raise up others in your field? Consider having coffee with someone who’s earlier along their journey than you, or volunteering your time with an organization.

Sally lived an amazing life that inspired millions. During her lifetime she was honored with numerous awards and was posthumously awarded the Presidential Medal of Freedom.

She passed away in 2012 after a seventeen-month battle with pancreatic cancer. Upon her death, we discovered that not only was Sally the first American woman in space, she was also the first gay astronaut.

Sally’s legacy has helped pave the way for a world where, no matter our gender, race, or sexual orientation, we really can reach for the stars.