26 Words and Phrases to Never Use in a Résumé 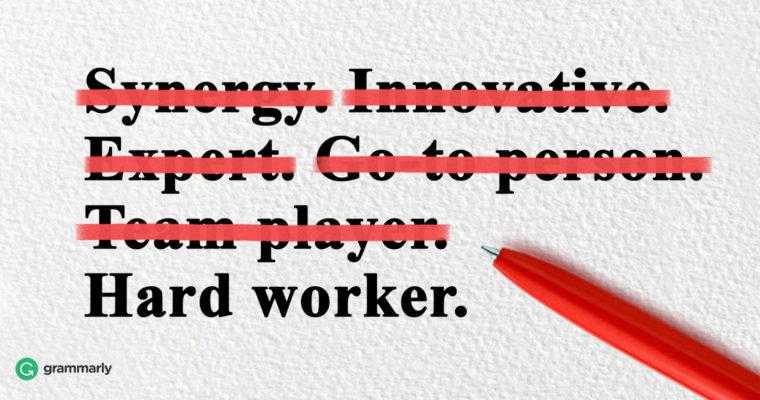 Résumés are tricky things. The tried-and-true résumé tropes of old no longer make the cut in today’s competitive market.

Odds are good that your résumé will go through an applicant tracking system scan to determine whether it contains the right keywords before it even hits a hiring manager’s desk. But let’s assume you’ve passed that test and your résumé is awaiting review. The difference between getting an interview and getting a thanks-but-no-thanks email (or no acknowledgement at all) could come down to the words or phrases you used in your résumé. Here are twenty-six of them to eradicate.

If you’re a prize standard poodle and you’ve recently scored a prestigious win at Crufts, then by all means use this term. Otherwise, thirty-eight percent of employers who responded to a CareerBuilder survey think you should slash it from your résumé immediately.

2 Think outside the box

There’s a certain irony in using a played-out expression to say that you’re a creative, original thinker. This one’s almost certain to make a hiring manager groan, or at least roll her eyes.

You want to show that your colleagues rely on you for answers. Unfortunately, this trite phrase is more likely to make it seem like they rely on you as a source of antiquated tropes.

No-no. This term has had its day. Let it fade from existence gracefully.

Office jargon—we love to hate it, don’t we? You probably wouldn’t have to think very long to come up with five stock words or phrases from office culture that make you cringe (at least inwardly) every time you hear them. Unfortunately, these words and phrases are pervasive. It’s all too easy to find yourself throwing them into your résumé without a second thought. Time to send these beastly buzzwords out to pasture.

We bet you can’t find even one person who’ll defend the use of the term “synergy” in business culture, but you’re welcome to try. Go ahead. We’ll wait. Twenty-two percent of CareerBuilder survey respondents rated this one a deal breaker.

You didn’t “action” that major project. Although verbs describe action, the word action itself is a noun. Please use it that way.

Don’t get us wrong, dynamic is a solid word. It refers to a force that stimulates change or progress, or a system or process characterized by constant change and progress. All good things! But this word is so good that it’s become played out. These days, it’s a red flag signifying that you can’t think of a better way to express yourself.

You may want to show that you single-handedly led a project in a more positive direction, but if you say that the changes your team implemented “going forward” were successful, you may find hiring managers twitching rather than applauding.

Of course hiring managers are looking for people whose ideas are authoritative and influential. But if you use a tired phrase like “thought leader” to describe yourself, you’re likely to come across as lacking vision rather than having it.

Every word counts when you’re trying to keep your résumé lean. Many people include stock filler words and phrases simply because they seem like part of a time-honored tradition. But your résumé is a place to stand out from the pack, not merge with it.

Boooo-ring. Use active verbs to describe your responsibilities. “Responsible for leading a committee” should become “Led a committee.”

Yes, yes, the recruiter knows that you’ll negotiate your salary. But you have to be offered a position first. With this phrase on your résumé, your odds of that are decidedly slimmer.

It’s assumed that if you’re asked to provide references you’ll give them. This phrase just takes up space.

Of course you should put your phone number and email address on your résumé. But no, you don’t have to identify them as such with the words Phone and Email.

And twelve more words to eliminate . . .

When you’re creating or updating your résumé, remember that showing is more powerful than telling. Instead of saying that you “think outside the box” say that you “envisioned and designed an innovative social media strategy that increased engagement by eighty-nine percent in three months.”

Remember to give concrete examples of your skills and successes—while avoiding cliches, buzzwords and filler—and your résumé will shine like a beacon to recruiters and hiring managers everywhere.