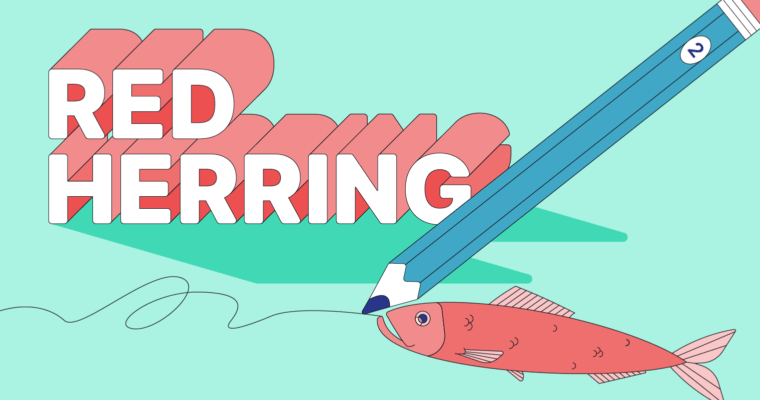 The red herring fallacy, one of the many logical fallacies you might encounter in essays, speeches, opinion pieces, and even casual conversations, is an attempt to reroute a discussion from its original topic and focus on something unrelated.

You’ve probably heard people use red herrings in arguments. You might have even used them yourself, with or without realizing it. Logical fallacies are so pervasive in our communication that they can be easy to miss—but once you know how to recognize them, you can catch them in your work and remove them before they undermine your arguments.

What is the red herring fallacy?

A red herring is a misleading statement, question, or argument meant to redirect a conversation away from its original topic.

A red herring is not an actual species of fish. For a long time, the common explanation for this phrase was that a kipper, or a cured herring that becomes pungent and takes on red-colored flesh from the curing process, was used to train hunting dogs to follow scent paths. In 2008, etymologists Gerald Cohen and Robert Scott Ross published their research that showed that the earliest references to the phrase came from a historical method for training horses, not dogs, to be comfortable with the chaos and competing smells that follow a hunting party.

The first instance of the term being used figuratively dates to 1807, when political journalist William Cobbett used it to critique the English press’ coverage of Napoleon’s defeat.

What is the purpose of a red herring?

The purpose of a red herring is to distract the reader or listener from the actual issue being discussed in a conversation or piece of writing. This isn’t always for nefarious purposes—sometimes, it’s a literary strategy used to keep readers in suspense. But for the purposes of this post, we’ll be focusing on the red herring fallacy as it’s used in rhetoric.

The red herring fallacy falls into the other category, informal fallacies. Informal fallacies are statements that are flawed because they lack a logically grounded premise. Rather than the statement being structurally unsound (like in our example above, where we reach an illogical conclusion by following the formula of “if A is true, then B is true”), the content presented in the statement doesn’t logically fit into its structure. We know it can be a bit tricky, so here’s an example of a red herring statement using the same content as our non-sequitur example above:

The red herring in this argument is the last sentence, the claim that salad’s lack of sweetness is what disqualifies it from being a dessert. It’s a brand-new claim shoehorned into the argument to move it away from the debate about whether a food’s temperature classifies it as a dessert or not, and it’s completely irrelevant.

Fallacies of relevance are a subcategory of informal fallacies, and the red herring fallacy is part of this subcategory. Other fallacies of relevance include appeal to the stone (dismissing a claim as absurd without actually demonstrating why it’s absurd), appeal to ignorance (arguing that a statement is true because there is no evidence that it isn’t true), and argument from incredulity (an arguer claiming that they can’t imagine how something could be true, so it can’t possibly be true).

In a debate, a participant might use a red herring to avoid discussing a topic for which they don’t have a well-developed position or if their position could make them look bad to the audience and media. Take a look at this example:

Moderator: Candidate, our city has faced corruption issues at City Hall for the past three decades. How do you plan to combat corruption in city government?

Participant: I have a multistep plan for combating corruption, and I also have a ten-point plan for reducing emissions. The first step in that ten-point environmental plan is . . .

Person 1: You always leave your stuff all over the room, you don’t lock the door behind you, and the trash is piling up. You’re a slob!

Person 2: Well you never pull your car all the way into the driveway, so I’m always stuck having to park on the street!

Red herrings in philosophy and pedagogy

In philosophy, red herrings function similarly to how they work in arguments and debates. The difference here is that they might be intentionally employed as a way to drive readers to think critically about a new argument. In pedagogy, such as in law school settings, red herrings might be worked into exams and study problems to test students’ comprehension of the information presented and their ability to reach the correct legal conclusion.

When do people use red herrings?

People use red herrings in nearly every kind of communication. These include the following:

A red herring can also be a literary device. If you’ve ever read a mystery novel where the clues seem to point to one culprit, only for the story’s true villain to be revealed later, you’ve read a story that uses a red herring as a literary device. Arthur Conan Doyle made use of red herrings in some of his Sherlock Holmes stories, like The Hound of the Baskervilles.

What are some examples of a red herring?

The red herring fallacy is similar to a few other fallacies. One similar fallacy, avoiding the issue, similarly moves an argument away from its original topic by introducing an irrelevant statement. Here’s an example:

Person 1: “All restaurants should be required to list the calories of each dish on their menus.”

Person 2: “Most of the restaurants in our city have low-calorie options.”

Whataboutism is another fallacy that has a few similarities to the red herring fallacy. Here’s an example of whataboutism:

Person 2: “But our old boss could never get enough people to work on Sundays.”

Whataboutism is a type of tu quoque fallacy. With this fallacy, the arguer reacts to an assertion with a separate criticism rather than addressing the initial claim. Like the red herring fallacy, whataboutism attempts to divert an argument from its original topic to a new one. But instead of introducing a completely unrelated topic, whataboutism attempts to turn the argument’s focus to another party’s faults in order to deflect criticism from the original party being discussed.

Here are a few more examples of the red herring fallacy in action:

Person 1: “I’m not comfortable wearing a leotard in public.”

Person 2: “Leotards are never comfortable. They’re made of shiny fabric, and remind me of watching gymnastics on TV.”

Parent: “Let’s go brush our teeth and get ready for bed.”

Storyteller: “We knew something was up because every time we went outside, garbage was strewn all around the yard. Our upstairs neighbor always complained about it, but we noticed that our downstairs neighbor never mentioned it. We also noticed it always seemed to be worse when he was home. My daughter suggested we get a doorbell camera, so we set one up. Turns out, there’s a raccoon in the neighborhood, and that’s who’s been going through the trash.”

See how in the last example, the storyteller chose to include details about the neighbors to keep their listener in suspense? Red herrings aren’t always “bad”—sometimes, they’re used strategically to make a story more interesting or a speech’s final conclusion more impactful.

What is a red herring logical fallacy?

A red herring is a misleading statement, question, or argument meant to redirect a conversation away from its original topic.

Is a red herring a literary device?

Red herrings can be used by writers to keep their readers in suspense or surprise them with an unexpected outcome.

How does it fit in with other logical fallacies?