The relationship between the words rack and wrack is not without complications. You can say, for example, that you have a rack in your closet just for storing shoes. If you play the guitar, you might refer to your guitar effects setup as an “effects rack.” It is also common, albeit very distasteful, to comment on someone’s physique by saying the person has a nice rack. However, in none of those cases would you be able to substitute rack with wrack. But then, when you want to say that something is nerve-racking, you can also say it’s nerve-wracking. If you look it up, you’ll see that wrack is an accepted spelling variant in some cases. In other cases, like when you want so say that your shoes are racked in your closet, you can’t use wrack. It’s a bit confusing. 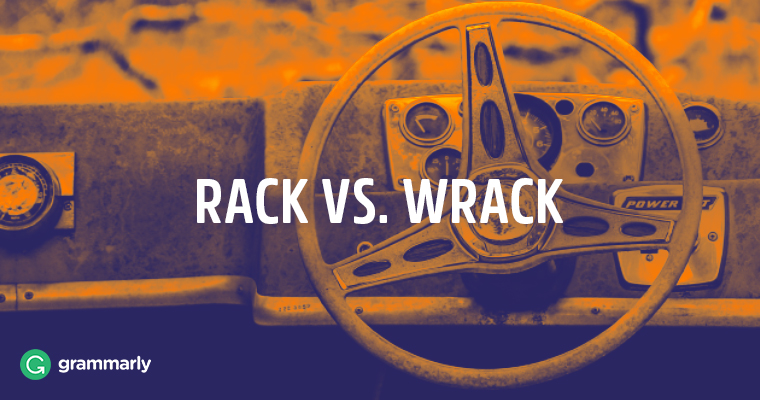 When can you substitute rack for wrack?

The word rack can be a noun and a verb. In both cases, it has multiple meanings. As a noun, rack can be a framework for storing or displaying things, a cut of meat, a bar or rail used for adjusting things, a torture device, and that triangle thing you use to set the balls when playing pool. As a verb, rack can mean to display on a rack, to torture someone on a rack (or to cause pain in general), or to gather or accumulate something. Wrack can also be a noun and a verb. As a noun, it can be a wreckage, a wrecked ship, the leftovers of something destroyed, destruction itself, and kelp and dry seaweed. As a verb, wrack has the same meaning as the verb wreck, which is to damage, ruin, or destroy something. When we say that something is nerve-racking, we are literally saying that something is causing pain to our nerves. When we say it’s nerve-wracking, we’re saying that something is causing damage to our nerves. We can use wrack instead of rack only in phrases where they share the similar meaning of pain and destruction—such as nerve-(w)racking, (w)rack my brain, (w)racked with guilt. The expression rack and ruin can also be written as wrack and ruin—in fact, the latter way of spelling it seems to be older, and it generally makes more sense. But the fact is that although rack and wrack started out as distinct words, the usage has been so muddled for so many centuries that Merriam-Webster advises treating them as variants. Examples: “The film doesn’t lack nerve-racking sequences or well-tuned jump scares.” —The Verge “It’s an exciting and nerve-wracking time to be working in the nonprofit world, which is rapidly being reshaped by technology, generational shifts and emerging cultural priorities.” —Adweek “As a parent of a trans kid, I rack my brain for ways to help people understand what trans is and trans isn’t.” —The Huffington Post “I had to wrack my brain to remember whether my household owns a radio besides the one in our car.” —NeimanLab “Terese is racked with guilt after paying Cecilia to incriminate Paul.” —Radio Times “They appear wracked with guilt, as if forgoing CPR was somehow akin to ‘giving up.’” —Slate Magazine “That struggle was too strong, hateful and long-lasting, which had come on the people, dire wrack and ruin—the greatest of night-evils.” —Beowulf, translated by Burton Raffel “Out of the rack and ruin of our gangster death, The rape and rot of graft, and stealth, and lies, We, the people, must redeem The land, the mines, the plants, the rivers.” —Langston Hughes, “Let America Be America Again”