Puns as a Literary Device, with Examples 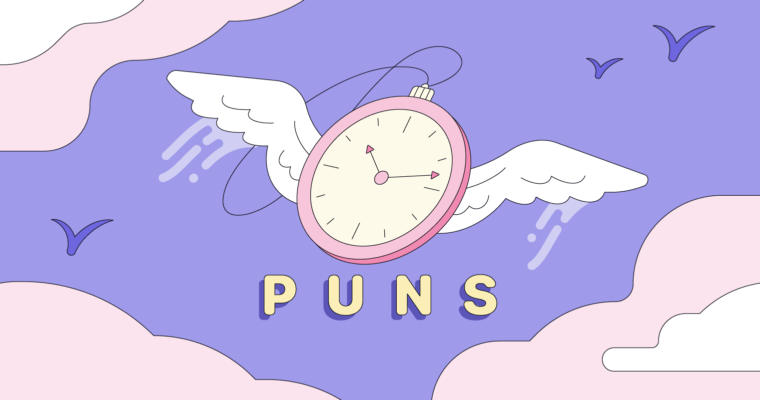 It’s okay if you’re rolling your eyes; most people do when they encounter a pun. That’s part of the fun.

A pun is a joke based on the interplay of homophones, words that sound the same but have different meanings. Puns in writing are most often used in a humorous way, to elicit a “jokey” tone, but they can also be used to enhance a reader’s interpretation, show off a clever use of language, or generate irony.

Write your best paper yet
Grammarly helps you communicate clearly

How do puns work?

As silly as they seem, puns are a surprisingly complex mental task. Researchers at the University of Windsor in Ontario ran a study that found it takes a division of labor between the left and right hemispheres of our brains in order to decipher a pun. At first the left hemisphere—the side tasked with linguistic analysis—has to interpret the word and pause on its usage, and then the right hemisphere takes over to understand the joke. For a pun to land, both sides of the brain need to communicate quickly with one another and generate either the smirk, sigh, giggle, or eye roll that the pun deserves.

All of that is to say, puns use a lot of brainpower, which is one of the reasons they can’t be written off as mere dad joke material.

When are puns used?

Causing a reader to think twice about a turn of phrase means they will spend more time in that moment and, hopefully, remember it better. For example, there are countless books and seminars about personal finance called Making Cents, a pun on the word cents, since it makes sense (logically) to make cents (monetarily). Make sense?

That said, because puns cause a reader to pause, you should consider whether or not it’s a pun worth pausing for. If you are constantly interrupting the pace of your piece for the sake of a pun, your reader might become more annoyed than delighted.

Puns can also be used to allude to an ongoing joke. In the television show Arrested Development, there is a running joke that whenever the family is being secretly surveilled, a company with the word blendin in its title is present. In one episode it’s the Blendin Mobile Pet Grooming truck, and in another it’s Blendin Electric Company. In a third it’s Blendin Catering. The pun uses the name Blendin, which, when spoken aloud, sounds like blend in, which is exactly what a secret surveillance company would be trying to do. Of course, the company’s recurring use of the word makes them stand out, adding irony to the whole situation.

How to make a pun

Puns depend on the writer or speaker purposely confusing one word with another. For a pun to work, the writer must ensure two things:

1 The source material is clear. It should be obvious why both words work in that context. If it is a stretch to make the pun clear, then it probably isn’t worth the pun.

2 The pun adds value to the reader. This is harder to gauge, but try to assess whether the altered meaning of the pun adds a sense of humor, irony, or gravity to the situation.

The English language is filled with homophones, creating plentiful opportunities to make accidental puns. The phrase “no pun intended” means the speaker created the wordplay unintentionally and is especially useful when either the situation does not call for humor or the pun has not had the effect they wanted it to.

What’s the difference between a pun and a joke?

Puns rely on wordplay, whereas jokes can take on a variety of setups and narrative structures. Furthermore, jokes are always intended to create humor, whereas puns might be used at times as rhetorical devices or to create irony rather than comedy. Jokes are the larger category of the two and encompass most puns. Therefore, most puns are jokes, but most jokes are not puns.

Other literary devices that have wordplay at their cores are oxymorons, phrases that use contradictory words to generate meaning, and double entendres, words being used precisely for their multiple meanings.

Puns in Romeo and Juliet

Puns can make your writing feel pretty heavy-handed, so it’s best to use them sparingly. But that doesn’t mean you should back down from puns. One of the greatest writers of all time—William Shakespeare—was notorious for dappling his pages with puns.

In act I, scene IV, an exchange between Romeo and Mercutio puns on the ideas of heavy and light:

Romeo: Give me a torch; I am not for this ambling. Being but heavy, I will bear the light.

Mercutio: Nay, gentle Romeo, we must have you dance.

Romeo: Not I, believe me. You have dancing shoes

With nimble soles. I have a soul of lead

So stakes me to the ground I cannot move.

In this exchange, Romeo is playing with the word “light.” When he says it, he means both the torch he has asked to be handed and the feeling of weightlessness that he lacks. After Mercutio’s insistence that they dance, Romeo responds with another pun, playing on the homonyms “sole” and “soul.” Written out, we see the difference between the words, but when the words are spoken, the audience hears the same word repeated twice, albeit with two different meanings.

Later in the play, in act III, scene I, Romeo’s wordy friend Mercutio has inflicted fatal wounds. He tells Romeo: “Ask for me tomorrow, and you shall find me a grave man. I am peppered, I warrant, for this world.” In his final moments, Mercutio unleashes a final pun using the word “grave.” “Grave” is a homophone—it can refer to being serious or to the hole where a dead body lies. Mercutio, aware of his fate, recognizes that by tomorrow he will be both a body in a grave and in a very serious state (death).

Other examples of puns in literature

Author Lewis Carroll was a master of wordplay. He used puns generously to create confusion and misunderstanding in his topsy-turvy Alice’s Adventures in Wonderland.

“You see the earth takes twenty-four hours to turn round on its axis”—  “Talking of axes,” said the Duchess, “chop off her head!”

“Mine is a long and a sad tale!” said the Mouse, turning to Alice and sighing. “It is a long tail, certainly,” said Alice, looking down with wonder at the Mouse’s tail; “but why do you call it sad?”

“And how many hours a day did you do lessons?” asked Alice, in a hurry to change the subject. “Ten hours the first day,” said the Mock Turtle: “nine the next, and so on.”

“What a curious plan!” exclaimed Alice. “That’s the reason they’re called lessons,” the Gryphon remarked: “because they lessen from day to day.”

Oscar Wilde was also famous for his deployment of puns. One of his most famous plays, The Importance of Being Earnest, has its most substantial pun in its very title. The play is about a series of characters all pretending to be someone named Earnest. The pun is on the word earnest being both a name and a quality of sincerity.

Examples of puns in pop culture

In the 1980s and ’90s, the actor Arnold Schwarzenegger made famous a trope in action movies called the “post-kill pun.” In the moment after a hero kills an enemy, he lets out a quip. For example, in Last Action Hero, when he assassinates his enemy by blowing up an ice-cream truck, he says, “I just iced him . . . to cone a phrase.”

Puns can also be found in names to denote something about that character. Harley Quinn, a character from the DC Comics universe, is a pun on the word harlequin. A harlequin is, historically, a lighthearted trickster with a devilish romantic spin. Harley Quinn, the character, exhibits all of these traits.

The best way to think of puns in writing is to consider them a wink at your reader. It’s a cheeky moment—a slight pause for cleverness. Sometimes they’re successful; often they’re not, but the groan of an unsuccessful pun can be an intended effect itself. There’s not much harm in experimenting with puns, so give them a try. Practice will make you a pundit in no time.

What is a pun?

A pun is a form of wordplay that relies on homophones, words that sound or look the same but have different meanings. For example, a controversial opinion about summer could be called a “hot take.”

How does a pun work?

A pun works by momentarily confusing the listener and making them think more deeply about the word choice.

What are the different kinds of puns?

There are three basic types of puns. Homophonic puns rely on words that sound the same but have different meanings. Compound puns combine multiple puns into one statement or joke. Recursive puns rely on an understanding of the first half of the joke to understand the second.

What are some synonyms for puns?

Synonyms for pun are “joke” and “double entendre.” Jokes are a broader category that encompasses puns, whereas double entendres are a narrower form of pun.