The State of Public Apologies in 2019 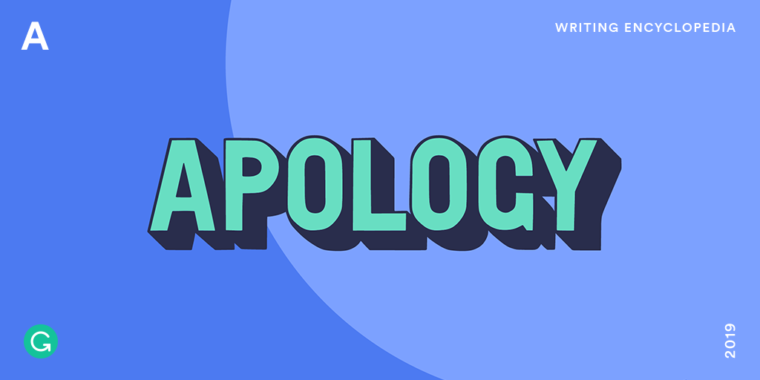 There are some lines you don’t cross. And in a time of cultural change, those lines are set in motion as we all try to figure out how to become better and grow as individuals. This state of cultural flux makes it more difficult for people who grew up at a different time to stay within the lines of what’s acceptable. For public figures, failing to change with the times often necessitates issuing a public apology letter.

In 2019, these statements have been issued for things ranging from working with people who have been “canceled” to making insensitive or racist comments themselves, to committing actual crimes. And when you look closely at the language of public apologies, it seems like these statements have actually gotten less effective over time.

Grammarly can help you strike the right tone
Try our tone detector!

How to write an effective apology

As a baseline, the best-received apologies tend to include three things: an actual apology (as in, saying, “I’m sorry,” rather than alluding to it), taking responsibility for the offense, and expressing empathy. That’s according to statements made by Lisa Leopold, an associate professor of English language studies at the Middlebury Institute of International Studies at Monterey in a podcast called The Academic Minute, where she discusses her research in regards to public apologies.

A good example of an apology which employs those three attributes comes from Lady Gaga at the beginning of 2019, as a result of her past collaboration with R. Kelly.

I stand by anyone who has ever been the victim of sexual assault: pic.twitter.com/67sz4WpV3i

In her statement, she says she is sorry, talks about her empathy for the women who were hurt by R. Kelly, and admits to her “twisted” thinking of the time. The apology itself isn’t perfect, and she does contextualize things, but it does seem to ring true overall.

A for Apology ⎮ #WritingAtoZ

2019 inspired a lot of public apologies, and the Notes app persisted as a common medium for celebrities to post their heartfelt words on social.

How not to write an effective apology

Contrast that with a more recent example, like Neil deGrasse Tyson’s apology for his tweet from August regarding mass shootings, wherein he compared those death figures to things like suicide and car accidents. Even though he did use the words “I apologize,” he stated that the reason for his apologizing was “not knowing in advance what effect my Tweet could have.” And earlier in the statement, he said, “Where I miscalculated was that I genuinely believed the Tweet would be helpful to anyone trying to save lives in America.” This language removes him from his perceived guilt, which risks further alienating people and perpetuating negative backlash.

An even more recent example of a failed public apology was the response from Mario Lopez following his comments about parenting and transgender children. In a statement to Page Six, he said, “The comments I made were ignorant and insensitive, and I now have a deeper understanding of how hurtful they were. I have been and always will be an ardent supporter of the LGBTQ community, and I am going to use this opportunity to better educate myself. Moving forward I will be more informed and thoughtful.”

By Leopold’s standards, this could be seen as a move further away from the best-case public apology since he never uses the phrase, “I’m sorry.” And it rings hollow given the full context of the statement, particularly since he relies on passive language, which implies less ownership, for the primary ‘apology’ (“the comments I made were ignorant and insensitive” rather than “I made ignorant and insensitive comments.”)

Of course, there are many factors that contribute to the effectiveness of public apologies. The perceived sincerity of the apology, the reason for it, how it was delivered, who was hurt by the action, how individuals felt about the apologizer beforehand, and, potentially, repercussions or acts of contrition—everything matters and can change the verdict doled out by the court of public opinion. And as with any communication, there is always the possibility of being misunderstood, even when it’s sincere. Adding to the complexity is the fact that these statements can be perceived as damage control, rather than a heartfelt expression of regret and humility.

The size and scope of the offense matter, too. In general, the worse the offense, the less effective an apology seems to be in the eyes of the public. Perhaps this is a function of the idea that larger offenses are more indicative of who a person truly is, and therefore that makes them less deserving of forgiveness. Change, after all, is easier to accomplish on smaller scales, so it’s harder to believe or accept, an apology in those cases. Regardless, the fact is that the standards for acceptable behavior are changing. To some, it’s at breakneck speeds, while to others it isn’t nearly fast enough. And while that discrepancy is bound to cause tension and impact reactions to things like public apologies, it’s also part of that which propels the conversation further along and ultimately leads to change.