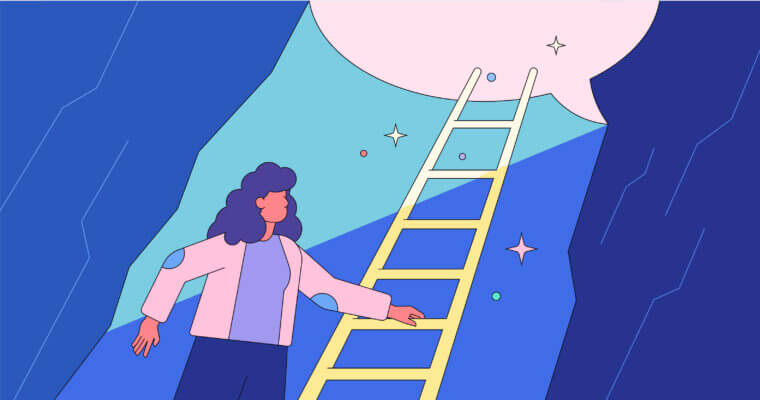 Confidence is typically regarded as an admirable quality, but it’s not always easy to achieve. Some people struggle with self-confidence because of limiting thoughts. These constraining beliefs—and the consequent false narrative they allow—can pervade anyone’s self-perception.

According to Psychology Today, these self-limiting thoughts are a product of our belief system, which starts developing in early childhood. Our belief system is formed from personal experiences throughout our lives and how we interpret those experiences.

It can be difficult to let go of self-limiting thoughts—which psychologists refer to as “belief perseverance.” These thoughts often manifest themselves as negative self-talk. To reframe your language toward gentle positivity, you’ll need to first recognize what these negative comments can look like.

>>Read More: How to Achieve a Confident Tone in Writing

One way to shift self-deprecating language is by finding an alternate interpretation of a situation. Below are four common negative statements that we tell ourselves and what to say instead.

Instead of “I’m an imposter and not good at my job,” say “I’m resourceful, and this is a chance to learn.”

Hitting a roadblock or making a mistake on the job might make you worry about your ability to succeed in your current role and lead you to experience imposter syndrome. All of a sudden, your mind fixates on one instance to draw conclusions about your long-term professional success.

Chances are that you’ve encountered new and challenging situations in the past and have figured out a way forward. Make statements that give yourself credit for it.

By saying “I’m resourceful,” you’re recognizing that even if you don’t have the answers up front, you have the aptitude to work through a situation. Seeing a perceived failure as an opportunity (“chance to learn”) also helps you reframe your expectations.

Instead of “It’s all my fault,” say “I’m responsible for my own decisions and behavior.”

Personalization is when you feel like you’re the cause for negative external events. People in this situation might feel responsible for what others do or how they behave. For example, if a friend doesn’t respond to your text message immediately, you might start to feel like you must have done or said something wrong.

Taking too much responsibility for negative situations that are outside of your own choices and actions can result in self-limiting thoughts. Realizing the true state of your responsibility—namely, your own decisions and how you act—is a step toward positive self-talk.

Self-judgment often creeps in when you compare your experience to other people’s expectations. In this scenario, other expectations might be from a parent, friend, or even broader societal conventions.

For example, you might catch yourself saying “I should own a house by now” because growing up you learned that homeownership is a mark of adulthood. Yet, you don’t own one. Alternatively, your close friends might be buying their first homes, causing you to feel like you’ve failed the expectations of your inner circle.

The alternative statement, “I could be _____, but I’m choosing to focus on _____, which feels right for me,” highlights that you have the option to do what others are doing, but you’re making a deliberate choice that feels authentic to you.

Instead of “There’s no time for anything,” say “I have many options to choose from, and I’ll prioritize what I care about most.”

Generalized self-defeating statements like this automatically deny you from participating in activities that serve you. You might’ve been invited to a sports game, and while it sounds like a fun way to unwind from the workweek, you feel like you don’t have time for it.

Instead of saying ‘no’ to something that might be mentally rejuvenating, consider that you get to choose how you spend your time. Self-care starts with prioritizing your wellness, including your mental health, first. Reinforcing your priorities can reduce self-limiting language.

Life situations will have outcomes that can’t always be anticipated, and feeling disappointed, frustrated, or guilty are normal, human emotions. By interpreting these situations from different perspectives through positive self-talk, you can catch and reframe self-limiting thoughts before they take hold.