56 Words That Are Actually Portmanteaus 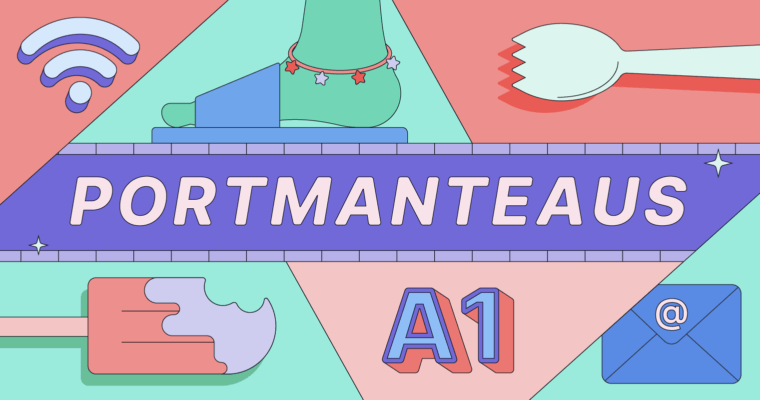 You might not be familiar with the term portmanteau, but you likely use portmanteaus in your vocabulary and writing more than you realize.

A portmanteau (pronounced port-MAN-toe) is a word made by blending at least two words. The new word combines both the sounds and meanings of the originals.

To form a portmanteau, usually the first segment of one word is attached to the final segment of another word. Some portmanteau words are blended in other ways, like combining the initial segments of both words.

Why is it called a portmanteau?

Author Lewis Carroll describes the idea of portmanteaus in his book Through the Looking-Glass:

“Well, ‘SLITHY’ means ‘lithe and slimy.’ ‘Lithe’ is the same as ‘active.’ You see it’s like a portmanteau—there are two meanings packed up into one word.”

The word portmanteau itself is an appropriate embodiment of this word form, since portmanteau, which is French for porte (“to carry”) + manteau (“cloak”), describes a suitcase that opens in two halves. Portmanteaus “carry” both meanings of their word pairs.

What is the function of a portmanteau?

A portmanteau is a literary device that encourages linguistic creativity. By combining two distinct words into one, a new word is created that holds its own specific meaning.

This wordplay expands the boundaries of language while also keeping readers engaged in the creative work.

5 anklet (ankle + bracelet) – jewelry designed to wrap around the ankle

6 athleisure (athletic + leisure) – comfortable clothing that can be worn for exercise or as casual, everyday attire

12 Brexit (Britain + exit) – the withdrawal of Great Britain from the European Union in 2020, after voting to leave in a 2016 referendum

21 electrocute (electricity + execute) – to harm or kill with electricity

24 froyo (frozen + yogurt) – a frozen dessert made of yogurt

36 Juneteenth (June + nineteenth) – the day that commemorates the announcement of the Emancipation Proclamation, and the end of slavery, in the United States

42 mocktail (mock + cocktail) – a cocktail that contains no alcohol

50 romcom (romance + comedy) – a show or movie plot that blends comedy and romance; similar to “sitcom,” which is a portmanteau word combining situational + comedy

53 threepeat (three + repeat) – a situation or event with the same outcome three times, typically in reference to a sporting event, like a championship

What is a portmanteau?

A portmanteau is a blended word made of two or more other words. Portmanteau words adopt the meanings of both words.

Why is it called a portmanteau?

The French word portmanteau describes a two-part suitcase. It combines the words porte, which means “to carry,” and manteau, meaning “cloak.” Like the suitcase, a portmanteau word holds or carries the meaning of two or more words.

What are some common examples of portmanteaus?

What are some other words for portmanteaus?

A portmanteau is a type of literary device. It’s often mistaken for a compound word but is linguistically different since portmanteaus don’t combine two complete words (like “firefighter”). Instead, portmanteau words blend parts of two distinct words.

Writing TipsWhat Is a Paradox in Writing?
Writing, grammar, and communication tips for your inbox.