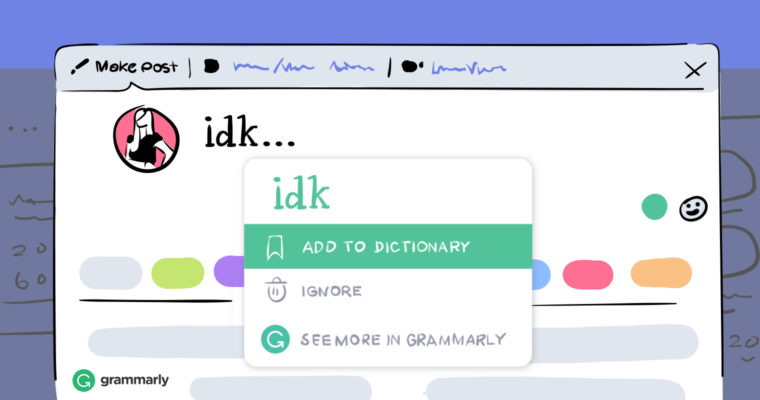 Let’s face it, the English-speaking world would be significantly less exciting without slang. How would we have survived 2017 without subtweeting, throwing shade, or declaring various things “lit?”

Many English words begin their lives as slang. Dictionaries like Merriam-Webster monitor slang closely in order to understand new trends in English, eventually adopting new slang words into the dictionary. If you’re interested in the words that made the cut in 2017, you can find them here.

Some spellings of old words and brand new words haven’t yet reached official dictionary inclusion yet. At Grammarly, we’re able to identify these words using data from our “Add to Dictionary” feature, and this year the data yielded some interesting surprises. Grammarly users added almost 3 million unique words to their personal dictionaries in 2017, which is more than the population of Paris!

Want to know more about the words that crushed it this year? Check out our insights from the top 25 slang words added to Grammarly dictionaries this year.

Here’s a tip: Want to learn how to use the “Add to Dictionary” feature for yourself? Learn more about this feature here.

Sound the grammar troll alarm, because “im” was the most-added word of 2017! This word appeared in over 22,000 personal dictionaries this year. The lowercase “i” was also a big hit this year, earning it the silver medal of slang for 2017, with over 18,000 additions to personal dictionaries.

But where do these two words come from? We’ve determined that “i” is most likely used like its correct, capitalized cousin “I,” but users are not fond of this capitalization rule. Additionally, “im” is most likely a misspelling of “I’m,” which also suggests less love for capitalization in 2017 than years past. Both of these spellings are nonstandard, which means we can’t recommend them, but their inclusion in personal dictionaries is most likely a nod to the increasing informality of the English language.

Like its brethren above, “dont” is most likely a version of “don’t” without the apostrophe. We don’t quite know how to feel about this.

Who’s the best writer on the planet? Lil ol me? It looks like our users were interested in some classic American slang this year, since both “lil” and “ol” were added to over 3000 dictionaries each.

To sleep, perchance to dream! This onomatopoeia was one of our top words last year and retains its spot as a top term for Grammarly users.

All of the abbreviations

This abbreviation for “I don’t know” has been on our radar for a while. Last year, we wrote an entire blog post in its honor. Nonetheless, “idk” still appears to be more popular than its textspeak cousins “lol” and “jk” this year.

And now we come to the meat of the personal dictionary acronym soup: acronyms with multiple meanings. All of “aca,” “aaa,” “bbb,” and “acb” have many different meanings, and interestingly, they were also all in the top 25 words our users added to their dictionaries.

Do you know what these acronyms mean? We want to hear from you in the comments below.

We’ve found a new acronym (to Grammarly)! Although we did not see a high frequency of “ot” in 2016, this year, it came as the nineteenth most popular word. Most commonly, “ot” (or the properly-capitalized “OT”) is an acronym for “overtime” in various sports.

While this word is not English, “que” is common in Spanish, French, and Portuguese In all of these languages, it means “what.” “Que” comes from the Latin word of the same meaning, “quid.”

It’s likely that Grammarly users are adding “que” to their dictionaries because they are multilingual, and write in some blend of another language and English, like Spanglish.

[Tip] Fun Fact: Although they were further down on the list, we also saw several Korean pop star names in our top words! Jimin and Yoongi were the most popular. [/Tip]

We have to start with a slight caveat here: Grammarly recognizes “Snapchat,” “Schoology,” “Quizlet,” and “Wattpad” as legitimate words. The reason these words were added to over 20,000 dictionaries is likely a distaste for capitalizing common app names. Once again, our users have demonstrated a shift toward less capitalized, more informal language.

Isn’t that a capital discovery?

We’ve long known that Grammarly users are enterprising hard workers, some of whom are also entrepreneurs. So it’s no surprise that Upwork is a popular addition to our dictionary since it is one of the most widely used apps for freelancers, entrepreneurs, and side-hustlers of all stripes.

Which words should we add to the Grammarly dictionary permanently? Vote for your favorite(s) below!