How to Reframe Passive-Aggressive Communication 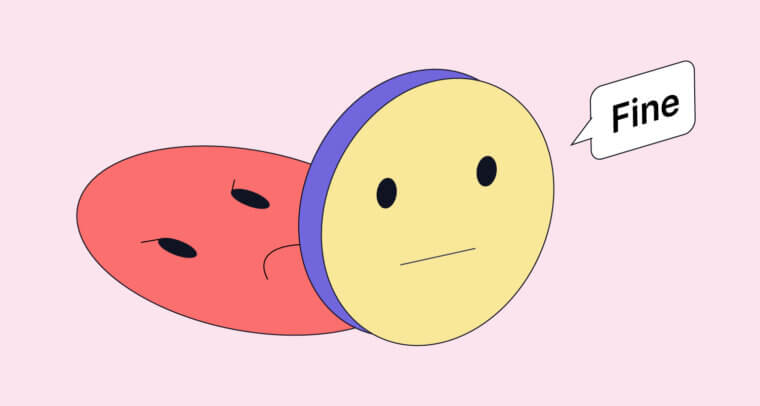 In many life situations, including in the workplace, feelings of frustration and anger can surface. The desire to avoid confrontation and stifle these emotions is a common response. However, when those strong feelings are left unaddressed, it can manifest as passive-aggressive communication.

These subtle but snide comments can slip through inadvertently and, over time, create more animosity within teams and professional relationships.

What is passive-aggressive communication?

Passive-aggressive behavior surfaces in different ways. It is sometimes used with the intent of secretly getting back at the person or group on the receiving end; other times, the passive-aggression is not deliberate. It might present through body language, like eye rolling, exaggerated sighs, or through written remarks.

For example, “I was really shocked at how polished your presentation was—good for you” is passive-aggressive language. It achieves its goal of being a masked insult by offering praise for a polished presentation, while noting surprise that the receiver is capable of doing great work, then closing with a patronizing statement.

There are many reasons people communicate passive-aggressively. This type of behavior can arise when someone doesn’t feel comfortable or capable of expressing their feelings in an open, honest, straightforward manner. Some people struggle to communicate clearly and directly or don’t feel equipped to articulate their feelings—or equipped to articulate them without blowing up.

A person may be unaware that they’re being passive-aggressive. This doesn’t mean it’s OK to be passive-aggressive in the workplace, or elsewhere, but it’s helpful to understand what might be at the root of the behavior.

How does passive-aggressive behavior affect others?

Passive-aggressive behavior can be intensely frustrating for the targeted person or people because it’s hard to identify, difficult to prove, and may even be unintentional. Passive aggression can lead to more conflict and mistrust because it prevents people from having a direct and honest conversation about the problem at hand.

Per my last email

Use this instead: I’m following up on my previous email regarding . . .

This phrasing is effective if you’ve sent the recipient a message asking for something, but they haven’t given a timely response. The alternative statement names specifically what you’re referring to without forcing the recipient to guess.

Use this instead: What do you think about trying XYZ instead?

“For future reference . . .” assumes that the recipient is a) aware of the reference you’re making and b) that your approach or insight is the only correct course of action. Asking for their thoughts about different ways to approach a situation in the future softens an accusatory, passive-aggressive tone.

Use this instead: I don’t feel good about this. Can we talk about it in person?

These words are contradictory, indicating that it’s both OK and that you’re dismissing it at the same time. A statement that’s both assertive (“I don’t feel . . . ”) and emotionally honest reduces the friction in a difficult workplace conversation. Additionally, speaking face-to-face can minimize misunderstandings about tone and illuminate other communication cues, like body language.

I’ve copied [boss] on this email

Use this instead: I’m excited to work together to find the best solution.

Bringing in a manager should not be the first resort for working out conflict. This alternative signals that you’re willing to problem-solve with your coworker, and it promotes team cooperation. It’s also a nondefensive option that avoids bringing in leadership to referee an issue.

It’s not that complicated

Use this instead: I can clarify. Which part is confusing?

Although a report or situation might be clear for you, not everyone will comprehend it the way you do. This alternative statement is effective because it doesn’t undermine the other person’s intelligence; instead, it communicates a willingness to understand where they’re getting stuck.

How to soften passive-aggressive communication

While the above section highlights common instances of passive-aggressive communication, catching passive-aggressive language in all of your emails or internal memos can be challenging. One way to vet your communication is by asking yourself two questions: “How would I feel if I were on the receiving end of this message?” And, “Is this message helpful?” If the answers are “bad, hurt, or annoyed” and “no or not really,” then consider reframing your communication with more neutral language or offering guidance instead of a criticism or a brush-off.

Leaning on passive-aggressive language in professional communication might feel like a safe way to circumvent potential conflict with a coworker. However, hiding feelings of anger and frustration can grow into bigger conflicts in the workplace. Consider giving your messages a close read to make sure you’re being professional and helpful. And if you need help with your tone and delivery, try using Grammarly so your messages are both accurate and productive.

Here are a few examples of how Grammarly can help you fine-tune your tone to be more empathetic:

By analyzing your word choice, phrasing, punctuation, and even capitalization, the tone detector can identify the tone of your message before you hit send, so you know just how your message will land.