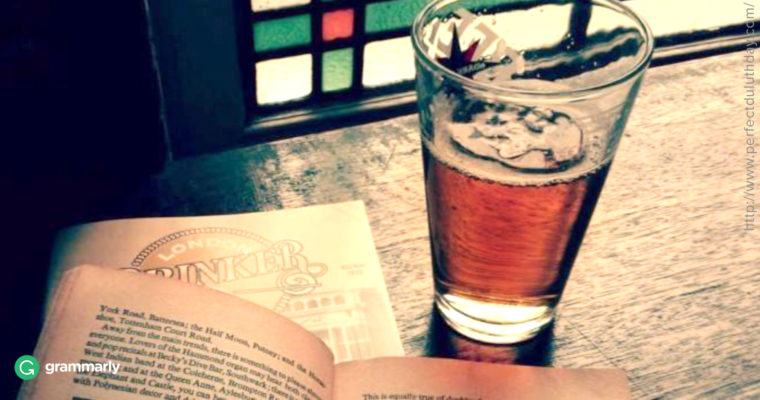 Do books and beer go well together? They do in Germany! The country is one of the world’s foremost producers of both beer and great literature. So, to celebrate this year’s Oktoberfest, we’ve gathered five books written by German authors (available in English) and paired them with five beers brewed in Germany (and available in the United States).

1 Of Walking on Ice and Löwenbräu Original Because Oktoberfest is held in Munich, it’s only natural to start this list with a book that has something to do with the city. Of Walking on Ice is a book by famed German director Werner Herzog, and it chronicles his three-week trip from Munich to Paris—on foot, through the snow. Because of the ties with Munich, it might be best to pair this book with a beer from a Munich brewery. There’s plenty of them in the region, so we’ve chosen one of the big six that have the right to appear in Oktoberfest—Löwenbräu Original.

2 Faust and Krombacher Hell Yes, this beer has the word “hell” in its name. And if you’re wondering what in the world possessed the Germans to name a beer that, it’s pretty simple—hell is German for “bright” or “light.” Still, it might be interesting to drink a beer with “hell” in its name and read Johann Wolfgang von Goethe’s take on the German legend about a guy named Faust, who makes a very bad bet with the devil.

3 Doctor Faustus and König Ludwig Weissbier If you liked Goethe’s version of the legend of Faust, you might be interested in what Thomas Mann did with the legend in his novel Doctor Faustus. This time, the story takes place in the first half of the twentieth century, a very turbulent period in the history of Germany and consequently the whole of Europe. One chapter of the book relates the story of the Bavarian King Ludwig II, which might be a great time to treat yourself with some König Ludwig Weissbier. Trust us, that Ludwig was quite the character.

4 The Complete Grimm’s Fairy Tales and Erdinger Schneeweiße Right, so, let’s just start this one by saying that there are plenty of reasons adults might be interested in reading fairy tales. The fairy tales collected by the brothers Grimm have been very influential on Western culture as a whole. Plus, as an adult, you can have a drink while you’re reading a fairy tale, right? So, when you come to the one with the girl whose skin is as white as snow, you might want to crack open a bottle of beer that’s is also white as snow, and that’s what Schneeweiße in Erdinger Schneeweiße means.

5 The Magic Mountain and Holsten Premium Bier With The Magic Mountain, another of Thomas Mann’s books, we come full circle. The beginning of the book is set in the main character’s native city of Hamburg, which was, in the Middle Ages, the center of beer-brewing, much like Munich is today. But alas, the beer production moved south, so we now have only one major brewery near Hamburg that exports to the United States—Holsten. Oh, and try not to have too much beer while you’re reading the book—it might just be the best piece of writing to come out of Germany in the last century. It would be a shame to miss anything in it.