The Top 10 Most Beautiful Nature Words 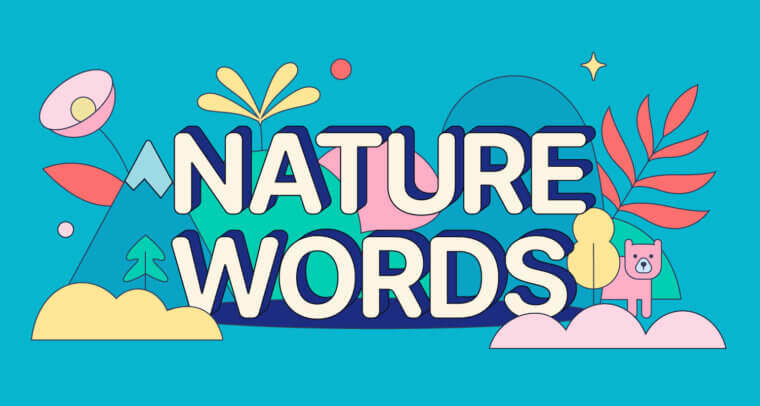 The English language encompasses more than one million distinct words, a number that grows by the thousands every year. Whether sending a quick text message or having a long conversation with a friend, we string together letters and words to form memories and stories and to create a shared understanding.

Even if you aren’t a self-proclaimed wordsmith or poet, it’s easy to appreciate the flavors and sounds of certain words, especially when describing something you find beautiful. Not only do words help us express our thoughts and feelings, they can also transport us to a different time and space.

For Earth Day we wanted to put together a list of some of the most beautiful nature words—words that delightfully embody sights, sounds, and scents found in the great outdoors.

Language and nature lovers everywhere will appreciate the power of these words to capture the tranquility of Mother Nature’s many wonders—even if you’re cooped up indoors!

The 10 most beautiful nature words

Similar to blossoming or budding, abloom is a lovely word to describe an area that abounds in new flowers. To describe a patch of flowers as abloom is to quantify its occurrence, signifying that an entire bush or garden patch is covered in a floral tapestry.

On a midsummer day in the heart of London, fresh roses were abloom in a blaze of bubblegum pink throughout Regent’s Park.

You’ve likely heard the word fauna used alongside flora, but what does the word mean on its own? Fauna describes all of the wildlife of a particular geological age, habitat, or region. Like flora encompasses plant life, fauna encompasses animal life, and perfectly so, as the word is almost a homonym for a sweet baby fawn!

Camels are one of many types of desert fauna that have learned how to adapt to unusually hot climates and scarce water.

A riverbank is defined as the slopes bordering a river. It acts as the barrier between water and land, often making for an idyllic spot to gaze at the ripples and the fish swimming beneath the water’s surface or to spend time skipping stones.

We stood along the rocky riverbank watching the sunset, admiring a blue heron in the distance as it waded into the water.

An evergreen plant is one that retains its green leaves throughout the year; it thrives across the seasons, steadfast and bright. But the definition doesn’t stop there. This adjective is also used to describe something that is continuously relevant. For instance, an evergreen tweet is one that maintains its popularity or interest over time.

Evergreens are able to withstand the winter’s ice storms with hard, tough-skinned needles that manage to stimulate food production even during the coldest months.

Saying the word celestial immediately transports you to a world above the clouds—a higher, heavenly realm beyond our earthly existence. By definition, celestial means “pertaining to the sky or to the universe beyond earth’s atmosphere” (i.e., outer space). It can also be used to describe something that is supremely good or divine.

The celestial beauty of the painting, which depicted a procession of shooting stars, caused all of the passersby to stare in awe.

Often used in reference to a valley or countryside, verdant means green with grass or other rich vegetation. To describe a landscape as verdant evokes the color green, connoting an image of flourishing pastures or foliage. This popular poetic adjective stems from the Latin word viridare, meaning literally “to grow green.”

Besides the many pints of Guinness, the highlight of our trip to Ireland was taking a train ride through the lush, verdant countryside peppered with sheep.

If you’ve ever stood before a lake or stream at night, you’ve probably seen a track of light that’s coming from the moon shining on the water. This is known as a moonglade. An illuminating and natural occurrence, the beauty of moonglades is especially striking when the water would otherwise be shrouded in darkness.

Canoeing at night was magical as we followed the path of the moonglade that ran from one end of the lake to the other.

Not quite as extensive as a forest but certainly comprising more than a few shrubs, a grove is a small grouping of trees that lacks dense undergrowth. The word often signifies a group of trees planted for a specific purpose, such as to produce nuts or fruit, like a pecan or orange grove.

They clambered up the stone walls of a steeply terraced olive grove in Tuscany.

Both an adjective and a noun, perennial describes something that lasts or exists for a long or seemingly infinite amount of time. Perennial flowers, for example, are usually seasonal and continually recurring, meaning they bloom once a year, perpetually.

The novel’s central theme is the perennial conflict between men and women.

You may be surprised to learn that the dramatic spray coming off of waves in an ocean has its own distinct name: spoondrift. Described as a showery sprinkle of seawater swept from the tops of waves, spoondrift is often generated by strong winds in a tempest.

As the gale increased, the tops of the waves were shorn off by the fierce blasts, clouding the whole atmosphere with spoondrift.