11 More Experts on How to Write Well This Year 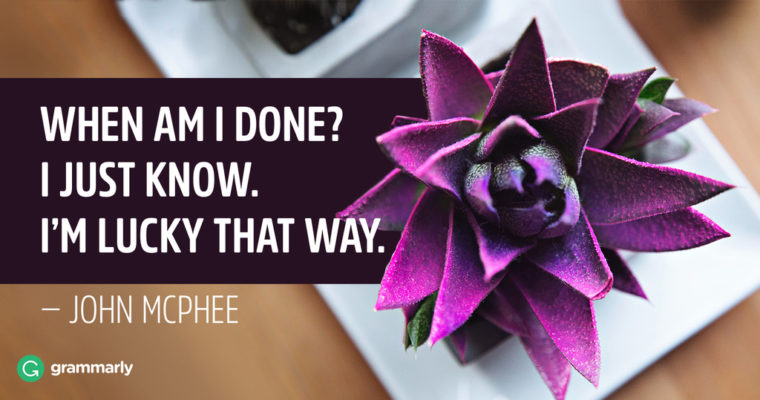 In theory, writing is not hard labor. It’s less backbreaking than laying bricks all day, for instance. And compared to the average herpetologist, most writers’ workplaces involve far fewer smelly rooms full of snakes. For that, we should be grateful.

Still, writing is hard work. And that’s just as true for vaunted authors with numerous books, awards, and honorary degrees to their credit as it is for newcomers who only recently resolved to hammer out more words each week. If any of that sounds like you—if you’re looking to step up that content game—we have help, in the form of recent pointers and perspectives from veteran writers.

This battle-tested rule stands true whether you’re a longform magazine writer or a horror novelist. Asked how a newcomer can perfect the craft, the National Book Award–winning author and journalist Ta-Nehisi Coates tweeted this response:

2 Schedule meetings with yourself.

It’s easy to daydream about things you’d like to write, but sometimes harder to carve out time each day to, you know, actually write them. When writing the critically acclaimed Don’t Think Twice, comic Mike Birbiglia says he struggled with procrastination:

I had the movie in my head, but I wasn’t writing it. But I noticed this trend in my life, which was that I was showing up to lunch meetings or business meetings, but I wasn’t showing up to meet myself. So I wrote a note next to my bed — this is so corny, but I wrote, “Mike! You have an appointment at Café Pedlar at 7 a.m. with your mind!” It’s so corny, and I would show up! I never didn’t show up, and I wrote this movie [in] spurts of essentially three hours, like I’d write from 7 a.m. to 10 a.m., and the reason why I would do that is because I was essentially barely awake. Because I feel like that moment, at 7 to 10 a.m., you’re not afraid of the world yet.

For John McPhee, the prolific author, octogenarian, and veritable institution at The New Yorker, writing hinges on structure: taking the various puzzle pieces floating around in one’s mind and notes, and figuring out in what order to arrange them. (A puzzle becomes much easier to assemble when you know what it’s a picture of, after all.)

In crafting an outline, McPhee does not save the ending for last. Whether the piece will be five thousand words or five thousand sentences, he decides on his ending almost as soon as he’s settled on a lead sentence. Still, he concedes the work that ensues in between is, alas, rarely simple:

Almost always there is considerable tension between chronology and theme, and chronology traditionally wins. The narrative wants to move from point to point through time, while topics that have arisen now and again across someone’s life cry out to be collected. They want to draw themselves together in a single body, in the way that salt does underground. But chronology usually dominates. As themes prove inconvenient, you find some way to tuck them in.

We’ll come back to McPhee in a moment.

4 “Don’t be trapped by your limits. Get creative.” —Eric Heisserer

Screenwriter Eric Heisserer spent years slogging through drafts of a script for the film Arrival on spec before finding the right backers. One struggle was depicting how the aliens in his film would communicate; he later recalled of this frustration: “My omnipresent self-critic mocked me for running out of words to describe actual language.”

Then his wife had the brilliant idea to just include rough sketches of alien logograms right in the script—But Heisserer soon discovered no screenwriting software at the time could include graphics. Ultimately he settled on a work-around that involved re-inserting the images each time a revised draft went out. It wasn’t pretty, but it worked.

Not everyone is cut out to write entire chapters in a single sitting. “I think if you work beyond four hours it goes bad,” novelist Zadie Smith recently remarked.

In other words, don’t stress if your entire opus doesn’t come pouring out of your fingertips the moment you sit down at the keyboard. Even just getting to 800 words, Smith says, “feels like a champion day.”

6 Back your work up.

It’s worth taking precautions to make sure, whatever else might go wrong, that your work survives intact.

7 Take your lumps, and keep at it.

Long before he was awarded a MacArthur “Genius Grant,” novelist Junot Díaz labored over a series of short stories for his peers in a grad-school workshop. His first effort there endured the kind of savage reviews that sometimes compel people to change professions:

Workshop rolls around and I still remember the feeling on my face as I watched my story get gutted. I’d caught beatdowns before, but this one was a graduate workshop beatdown and I felt those lumps for days. Sure, there was some mild praise about the setting and a few of my lines got checkmarks next to them, but the overwhelming reaction was negative.

Díaz stuck with it, inhaling huge volumes of short fiction each day, and persisting even after his second attempt met tepid responses. Battling through it all, Díaz discovered something about himself as a writer—something that stayed with him well through the publication of his first book.

8 Don’t wait for anyone to give you permission.

Anyone can be a writer. But before she was a Pulitzer-winning novelist, most recently grinding out the 736-page Barkskins, this would’ve been a surprise to Annie Proulx, as she once told The Paris Review:

I never thought of myself as a writer. I only backed into it through having to make a living. And then I discovered that I could actually do it. I thought there was some arcane fellowship that you knew at birth that you had to belong to in order to be a writer.

9 Be good to yourself.

Even wildly popular novelists who start working before 6 a.m. (looking at you, J.K. Rowling) aren’t above writing from the comfort of bed:

Taking care of yourself doesn’t just mean finding the coziest place to operate, though. Daily exercise is a part of the process many writers swear by. From Haruki Murakami to Joyce Carol Oates, many specifically advocate running to help untangle the writerly knots of the mind.

10 Forgive yourself when it doesn’t come easy.

Science writer Elizabeth Kolbert says her latest book, The Sixth Extinction, was at times painful to work on: “I thought it was going to do me in, at points. It just wasn’t coming together.”

That a longtime journalist of Kolbert’s caliber still feels tested by the craft should hearten anyone who’s struggling to keep up with its attendant pressures and deadlines.

While piecing together the story was an arduous, years-long trek that took her everywhere from the Great Barrier Reef to a cloud forest in the Andes, Kolbert’s efforts ultimately paid off. Despite being “way overdue,” when it was finally done, the book went on to win the Pulitzer Prize for General Non-Fiction.

A bonus from the aforementioned John McPhee, who plans his endings from the outset: You have to not only finish the piece but also conclude the process around it. Editing, it’s sometimes said, is the art of knowing when to stop tinkering.

People often ask how I know when I’m done—not just when I’ve come to the end, but in all the drafts and revisions and substitutions of one word for another how do I know there is no more to do? When am I done? I just know. I’m lucky that way. What I know is that I can’t do any better; someone else might do better, but that’s all I can do; so I call it done.

With diligence, you can carry your writing goals across the finish line. Grammarly will be there cheering you on.