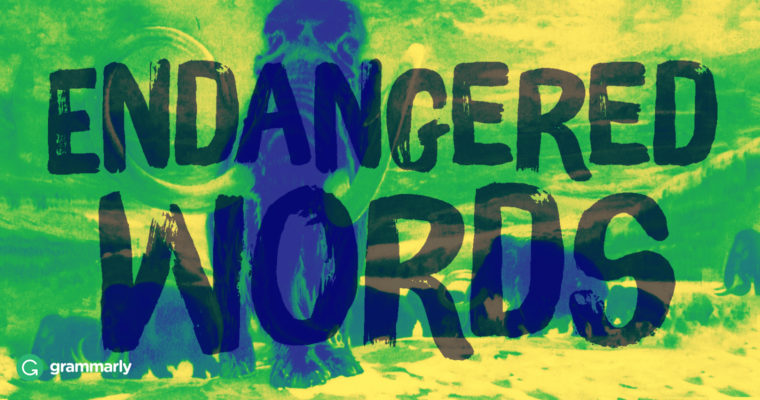 New words come into use, old words slowly fade away. It’s a natural, all-too-familiar cycle. We’ve already covered words that may be headed toward extinction. Here are five more words in various stages of endangerment. But, who knows? Maybe some of them can still be saved—but should we save all of them?

Tag isn’t a word that’ll disappear anytime soon, as long as things still cost money and come with price tags. But in the United States, and in the state of Virginia especially, tag is a slang term for a pine needle. According to the Dictionary of American Regional English, this meaning of tag might soon disappear, and it’s one of the fifty regional slang words they’ve included in their endangered words list. If more people using a word means the word is less likely to die out, tag and other dialectical words might need to go mainstream in order to survive.

While we’re on the subject of dialects, when whole dialects die out, they take plenty of words and expressions with them. Young people in the United Kingdom are not particularly interested in Cockney rhyming slang, so it’s foreseeable that in the future, phrases like apples and pears, meaning “stairs,” or china plate, meaning “mate,” might not be heard, except in old TV shows.

Often enough, we see a word disappear because the thing it was used for no longer exists. That’s what happened with drysalter. Drysalters were people who sold chemicals, and things like glue and paint. This profession existed up to the early twentieth century, but in 2011, Collins Dictionary decided that the word is so far gone it should be removed from their dictionaries.

Marvellous is having a hard time in the UK. According to a study performed by Lancaster University and Cambridge University Press, the word appeared in spoken English 155 times per million words just twenty years ago. Now, it’s down to two appearances per million words. The culprit seems to be the Brits’ willingness to adopt synonyms commonly used in American English. In this case, it’s awesome that’s taking the place of marvellous.

Some words fade from everyday language because of changing societal attitudes. Macalester College’s More Than Words Campaign aims to eradicate the use of certain words in an offensive context, including spaz. In the US, this word is fairly benign—it simply means “klutz.” But in the UK, it is a deeply offensive insult toward people with disabilities. So, maybe this is one that we should let go of.

What do you think? Should we keep marvelous, tag, and drysalter alive?