What Is Logos? History, Definition, and Examples 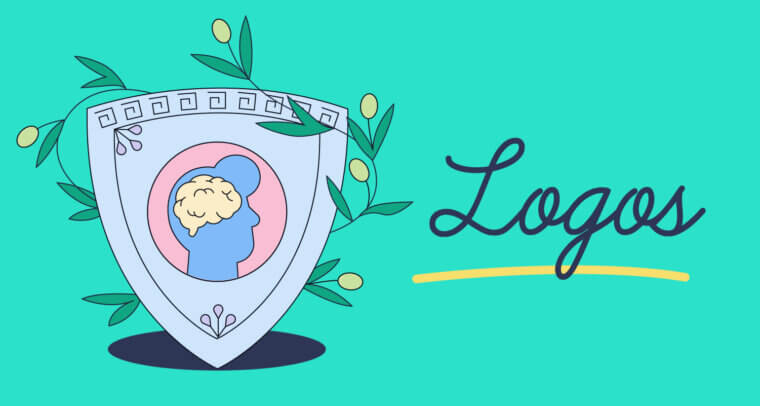 If you’ve ever written a paper for school, prepared a work-related report, or built an argument about a topic, chances are you’ve appealed to your audience’s sense of reason and logic.

Rhetoric that’s supported by credible evidence is logos in action. Understanding what logos is, and how to use it effectively, can strengthen your persuasive writing skills when developing an argument or claim.

Logos was introduced by the philosopher Aristotle as one of the modes of persuasion, alongside ethos, pathos, and kairos. In his work The Art of Rhetoric, Aristotle describes logos as “reasoned discourse” in which a writer or speaker provides facts, figures, and additional information to establish their points.

Logos is present in nearly all arguments to some extent, and building rational connections for the audience is also an important element of the logos appeal. The logical flow from one piece of evidence to the next, paving the way to your claim, must be clear and sound so the audience can’t draw any other conclusion than what you’ve presented.

How is logos used?

Aside from practicing logos in academic writing, such as an argumentative essay, logos is also used in various industries, like law, politics, technology, marketing, news reporting, and business.

For example, political campaigns might appeal to their target audiences’ pathos and logos by citing a heartwarming story and then sharing a relevant statistic to support their position. They are playing to the audience’s emotions and logic to make their case.

Logos is also commonly used in business writing, whether for industry white papers demonstrating a trend based on historical data or pitching a new product based on user-submitted feedback that’s used as evidence for the new idea.

The inclusion of an appeal to logos can also be found in literature. Writers must create characters and narratives that make sense to the reader. To achieve this, writers will include context about a character’s history or establish a plotline that informs the story’s narrative arc.

When is logos used?

Logos is used to appeal to an audience’s reason with the support of facts. The ultimate goal is persuading them to agree with the author’s idea or belief. However, not all arguments that include facts are logical.

Data can be manipulated, and logos can be misused—intentionally or unintentionally—to convince the audience or reader to accept an assertion. When there’s an unrealistic leap between the facts and a claim, it’s an indication of a logical fallacy.

Here are some types of logical fallacies that can arise when logos is misapplied:

Below are logos examples from literature, business, and politics, with supporting facts that appeal to the audience’s logic.

“All men are mortal.

—Aristotle’s The Art of Rhetoric

“The state has not produced one iota of medical evidence to the effect that the crime Tom Robinson is charged with ever took place. It has relied instead upon the testimony of two witnesses whose evidence has not only been called into serious question on cross-examination, but has been flatly co

ntradicted by the defendant. The defendant is not guilty, but somebody in this courtroom is.”

—To Kill a Mockingbird, by Harper Lee

“Just look at insulin. One in ten Americans has diabetes. In Virginia, I met a 13-year-old boy—the handsome young man standing up there, Joshua Davis. He and his dad both have Type 1 diabetes, which means they need insulin every single day.

Insulin costs about $10 a vial to make. That’s what it costs the—the pharmaceutical company. But drug companies charge families like Joshua and his dad up to 30 times that amount. . . .

Logos is a persuasive device that’s used in writing and public speaking. It employs facts, figures, data, and other credible evidence to support an opinion, argument, or conclusion. These facts appeal to the audience’s sense of reason and reinforce the writer’s claims.

How does logos fit into a logical argument?

A logical argument guides the audience toward a realistic assumption or conclusion by connecting a claim to facts and other evidence. Writers appeal to an audience’s desire for logic (logos) by making clear the relationship between the data and ideas in an argument.

When is logos used?

Writing TipsHow to Write a Monologue in 7 Steps
Writing, grammar, and communication tips for your inbox.